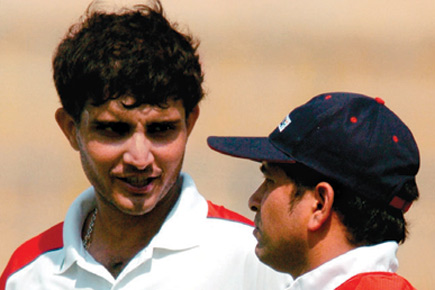 
Q Describe Sachin for me.

A He is the King of Cricket. There will be none like him for a long long time. He is in a league of his own.

Q You have seen him more closely than most in this world. Deconstruct some of his best knocks for us…

A Someone who has scored 17,000 runs in ODIs and close to 13,000 runs in Tests has played more memo­rable knocks than one can remember. However, his 175 at Hyderabad (in the fifth ODI against Australia on 5 November) is his best ever in ODIs. I’d rate it higher than his knocks in Sharjah, his match-winning hundred in the CB Series or even his 98 at Centurion against Pakistan. This is because chasing 350 is a completely different ball game. To be able to score 175 at age 36 off 140 balls and batting in the middle for 45-plus overs is unbelievable. It can only be compared with his knock against Pakistan in 1999. He was in severe pain and after I got out at 82/5, he staged a miraculous recovery. It was a real master-class to see him bat with his back hurting all the time. He was playing for his country and that’s always been his unique distinction.

Q How do you know Sachin is batting well? You keep telling me you are able to comprehend when he is batting close to his best.

A When you see Sachin come on to the front foot at the start of his innings, you instantly realise he is in form. He will soon start striking the ball well and picking the gaps. When I watched him from the other end, I knew it was only a matter of time before the runs started flowing. In the recently concluded series, he started batting well in Delhi where he unfortunately got run out. At Mohali, he fell to a rough decision and then played the classic at Hyderabad.

Q At 36, how long do you think he will continue?

A Look, age is simply not an issue. As long as you are playing to your best and winning games for India, you continue to play. See Ricky Ponting: he is 34 and is going great guns. See Jayasuriya. Sachin is playing beautifully. Someone who has scored a 163 not out and a 175 in ODI cricket in 2009 should not even think of call­ing it quits. I am sure he will play the 2011 World Cup. He will give it one final crack on home soil.