The Mind and Method of Gopichand

A player excluded from the Indian team has sued P Gopichand. Is the national badminton coach an unfair autocrat or just someone who excels at his job? 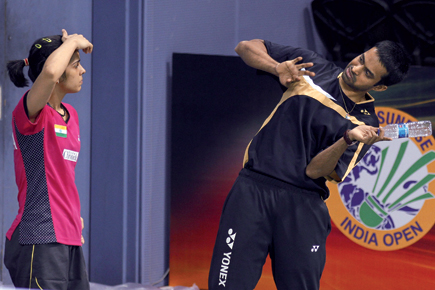 A player excluded from the Indian team has sued P Gopichand. Is the national badminton coach an unfair autocrat or just someone who excels at his job?


At a glittering function at the Bombay Gymkhana in Mumbai in 2009, Saina Nehwal was enjoying her newfound celebrity status. People were clamouring for her attention. There was laughter and compliments, and Saina was the cynosure of it all. It took one look from Pullela Gopichand to bring the badminton star back to earth.

One look, and a glance at his watch.

Saina caught the look, said a hurried ‘goodbye’ to those around her, and retired for the night. It was 10:30 pm and her coach would not have taken it kindly if she missed her bedtime. This was in 2009. Even today, Gopi’s hold over his wards, who include an Olympic medallist and some of India’s best badminton talent, has not loosened a bit.

Whether at his Gopichand Badminton Academy or in his capacity as chief national coach of India, the 38-year-old Gopi has always been a tough taskmaster on court. He insists there is no place for democracy if you want to produce a champion. And in a country without a strong sports culture, where players are more likely to shirk than sweat it out, his approach has produced more champions than that of any other coach in recent times.

Gopi enjoys a fair degree of popularity among his wards, thanks mainly to his hands-on approach with them and his achievements (he is one of only two Indian players to win the prestigious All England title). But a strict maker and enforcer of rules cannot escape rebellion. The latest mutiny comes from a player he helped transform from a promising shuttler into a national champion in women’s and mixed doubles: 19-year-old Prajakta Sawant from Maharashtra.

The doubles specialist has moved the Bombay High Court accusing her coach of mental harassment and a bias against players who are not from his state nor academy. Sawant made this move after she was kept out of a national training camp and not picked as part of the Indian team for ongoing Asian circuit matches.

Sawant, it must be said, has had a history of making allegations against the establishment since her junior days.

She left Maharashtra and played for Andhra Pradesh for a year because the Maharashtra Badminton Association (MBA) did not bend its selection rules to give her a direct entry to the junior nationals. Then she returned to her home state alleging a bias against her in Andhra Pradesh because she did not get a chance to play in the National Games despite being in the Andhra Pradesh team. But she continued to be part of the Gopichand Academy.

Even on court, Sawant has not had a consistent partnership with any player in the past five years. Sources blame her frequent partner switches on the interference of her parents.

Nevertheless, the allegations she has made against Gopi are serious. And while not many in India’s badminton circles are willing to support Sawant, they are using this development to air other grievances against Gopi.

The first to do so was Gopi’s biggest critic and India’s famous doubles star, Jwala Gutta. The world championship bronze medallist has been at loggerheads with Gopi since 2007 and there has been no love lost between the two. This feud had its origin in Gopi’s decision to stop all players from participating in international competitions and ask them to join a conditioning-and-training camp in Hyderabad for four weeks. The national coach’s argument was that Indian players lacked the fitness to compete in the global arena and that it was better to train than play tournaments prematurely.

But the likes of Jwala, Shruti Kurien and Chetan Anand were against the idea. They were trying to qualify for the 2008 Beijing Olympics and felt that Gopi’s move was aimed at stopping them from making the cut. The players refused to join the camp. Gopi responded by sending a second string team to the Uber Cup Asian qualifier in 2008 and forced Jwala’s mixed doubles partner, V Diju, to play with another player, Aparna Balan, for a year.

“I have been questioning so many things that have been wrong. But no one has been listening,” says Jwala, referring to the revolt she led in 2007. The tiff lasted for over a year. Gopi, who initially defended himself, yielded some ground by allowing the players to train with coaches of their choice. “That one year taught [Gopi] that he cannot bulldoze his way through and implement his methods,” says an insider at the Badminton Association of India (BAI) on condition of anonymity, “He withdrew for the time being. But then he again started taking control of the coaching system.”

Even Saina was not spared.  Soon after the 2009 World Championship in Hyderabad, she wanted to defend her ranking and play the China Masters. But Gopi felt that she needed to train a few weeks as she had just recovered from chicken pox. Saina did not play the tournament. Her entry form reached the world body a day after the deadline.

“The BAI could not have done anything because instructions to send the entry was given late [by Gopi],” says the source. It is not clear if this was a slip-up or done deliberately, but there is little doubt that Gopi did not want her to play the China Masters.

Saina had her way the rest of the year. But she had to go back to the drawing board with Gopi at the start of 2010 after her performance graph took a downturn. The relationship between the coach and his most decorated pupil has been blow-hot-blow-cold since then. But Gopi has emerged stronger after every spat. She has had to listen to Gopi and follow his plans to get better results. In 2010, he whittled down her tournament schedule. This helped her stay fresh for big tournaments and she ended up winning two Super Series titles and a gold medal at the Commonwealth Games.

Saina and Gopi had another falling out last year, and this one was bigger and more public. Saina wrote a letter to the Sports Authority of India (SAI) for permission to work with coach Bhaskar Babu, as she was not happy training with Gopi. The latter kept a low profile and waited for his moment to strike. It came soon enough. Saina’s success graph began to drop. Swallowing her pride, she again turned to Gopi; she and her father Harvir Singh met him with their request and he agreed to work with her again. But he ensured that Bhaskar Babu, once his trusted lieutenant, was no longer on the national coaching panel. Bhaskar Babu now coaches players at another SAI centre in Hyderabad.

“[Gopi] is otherwise an amiable person. But when he wants to put his foot down and implement his plans, he can be ruthless,” says another coach who has worked with him. “When it comes to the coaching part, on court and off, Gopi is one of the best,” admits former national champion Trupti Murgunde. “But it is the academy politics that he plays that makes you lose respect for him.” Murgunde still feels she deserved to be in the Indian squad for the 2010 Commonwealth Games, given that she was the national champion that year. However, she was left out to accommodate Balan, a Gopi student.

Most allegations against Gopi in the recent past have been about how he has given preferential treatment to students of his academy in selections for the national camp and Indian team. Some players and even BAI officials are of the view that a person running a private academy should not be India’s national coach. “It creates a conflict of interest and is bound to make the coach partial towards his academy players,” says Jwala, who also questions the logic of holding all national camps at the Gopichand Academy.

Yet, despite all the gripes, Gopi’s training methods have been effective. The performance of Indian shuttlers has been on the rise. Under his leadership, India won two individual gold medals and a team silver in the 2010 Commonwealth Games and a bronze medal in the London Olympics. P Kashyap reached the Olympic quarterfinals and the talented PV Sindhu, regarded as Saina’s successor, became the first Indian to win the Asian junior championships.  In 2010, the Indian women’s team qualified for the Uber Cup finals for the first time in the tournament’s history. No Indian shuttler is underestimated on the international scene anymore.

Whenever he is in Hyderabad, Gopichand’s day begins at 4.30 in the morning. He is at his academy till sunset, working with players, and eating breakfast and lunch with them. He monitors their diet and is present at most training sessions. This hands-on approach means that he has won grudging admiration from even his strongest critics.

U Vimal Kumar, the former national coach and now a national selector, has been vocal about the need for Gopi to be more transparent in his selection criteria. But he is against dropping him as national coach. Vimal does not accept the argument that no one running his own academy should be appointed national coach. He does feel, however, that such a person must keep himself above board in selection matters. “Every good coach in the country is running an academy… even SAI coaches have their own list of students. If we apply this logic [of disqualifying a private coach for a national role], then we can’t have a national coach,” says Vimal, who himself has held two simultaneous posts. He was director of the Prakash Padukone Badminton Academy while he was the chief national coach. “Results are the best measure of any coach’s success and Gopi has proved himself,” he adds.

The BAI mandarins are well aware of that. A couple of attempts to dethrone Gopi have failed because his protégés have done so well internationally that his performance as a coach cannot be faulted, regardless of the politics played behind the scenes.

With Saina winning the Olympic bronze in London, Gopi has only gained confidence and additional authority to implement his plans.

And keeping everyone happy is not part of those.