The Messi Fans of India

One of the most exciting footballers in the world, Lionel Messi, is an improbable Indian sweetheart 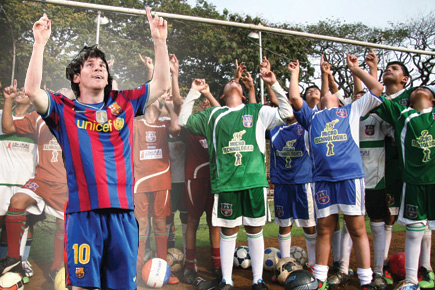 One of the most exciting footballers in the world, Lionel Messi, is an improbable Indian sweetheart.


Tejal Gandhi sits at the corner of the football field in Don Bosco Engineering College in Kurla, Mumbai. The students of Kenkre Football Academy are practising there. Shubhankar, Tejal’s 12-year-old son, is among the nearly two dozen boys on the ground. Beyond the field, airplanes land at the adjacent Mumbai airport. As Tejal chats with other soccer moms, she perhaps wonders where to fly this year for the family’s annual vacation, or how to celebrate Shubhankar’s next birthday.

Shubhankar’s last few birthday parties have had some football element or the other. The gifts, received or given, were football related. “He is happy to get a football, even if it is his tenth,” Tejal says. Family holidays are planned to places that can slake Shubhankar’s thirst for the sport. In 2008, they went to London. Shubhankar and his father Mihir watched Chelsea, his favourite club, play AS Roma at Chelsea’s home ground, Stamford Bridge. The seats were chosen with great care online from their home in Andheri. This year, they are going to Spain, home to Real Madrid and Barcelona, a flamboyant football club that has on its rolls an increasingly popular hero of new Indians, Lionel Messi.

How integral football has become to the lives of urban Indian youth cannot be overemphasised. It can be best seen in the way middle-class Indian mothers now speak the football lexicon. Names like ‘Manchester’, ‘Lotto’ and ‘Chelsea’ came up often during the mummy conference at the sidelines at Kurla. It is also evident in the sacrilegious lengths mothers like Tejal go to provide a hitherto unacceptable diet to their children. When her son’s keenness to play football brought home the news that he had to eat eggs, Tejal, a Jain and devout vegetarian, cooked scrambled eggs for him. “I didn’t allow it to upset me. But I had to hold my breath because of the smell,” she says.

Arsenal, despite their lack of recent success, are the stylistic favourite of many Indian football lovers. But when it comes to their favourite individual player, most invoke the name of the small, gap-toothed deity who, at 22, has still not learnt to tuck his shirt in—Messi. While some fans have been following the striker since the 2005 Under-20 World Cup in Holland, his recent adventures for Barcelona, like the four-goal blitz against Arsenal, have spread Messi fever farther. As this is being written, Barcelona have lost the first leg of their Champions League semifinal against Jose Mourinho’s Inter Milan. But defeat would not matter that much to fans. The World Cup follows in June. The fever is certain to continue. In 2006, coach Jose Pekerman left the then raw Messi on the bench for Argentina’s quarterfinal against Germany. Fans were furious. Now Messi is seasoned. And in the position of coach is Diego Maradona.

This is the ESPN generation of Indian youth that has grown up on live, regular telecasts of European football. The nights that their favourite team plays, they have no qualms about botching up sleep and reporting for their own training at 6 am, as 22-year-old Siddharth Pandey, a member of India’s junior hockey team, does. Even MBA students with an exam the next morning cannot resist the seduction of the tube. The night Messi scored four goals for Barcelona against Arsenal, Sachin Joshi, a student of Mumbai’s Narsee Monjee Institute of Management Studies, studied macro-economics with football.

Mithun Purkayashta, 28, is a fan whose love for Messi shows in all aspects of his life. A copywriter for Saatchi & Saatchi in Delhi, Mithun’s email and Facebook accounts are in the name ‘Mitzy Messi’, ‘Mitzy’ being his nickname. Instead of saying ‘Oh my God’, he often says ‘Oh my Messi.’ He owns an original Barcelona Messi shirt that he washes himself because he does not trust the laundry with it. He is thinking of buying an LCD TV for the World Cup. “I have been a fan of Messi’s since I saw him in the U-20 World Cup. There was a spring in his step that set him apart,” he says.

Messi’s performance in the U-20 World Cup was all-conquering and carried Argentina to their fifth title. He was the tournament’s highest scorer and named its best player. No talented footballer from Argentina dodges comparison with Maradona. The U-20 World Cup was one of the many intriguing similarities Messi shared with the legend. He is short, left-footed, a ball player. And, like Maradona in 1979, he won his country the junior World Cup.

“The resemblance with Maradona was striking,” says Siddharth, the junior India hockey player. “But the noteworthy thing about Messi’s performance in the U-20 World Cup was that he decimated teams known for fielding overage players. It proved his class.” Siddharth has been following Messi since even earlier than the junior World Cup. “It happened in the course of following Cesc Fabregas [the Spain and Arsenal star],” Siddharth says. “They were roomies at La Masia, the Barcelona academy. Now both are superstars. Both are 22. Just like me. It’s amazing.” Facts and emotion flow from his heart. His voice almost trembles with reverence. “Messi had growth hormone deficiency. Barcelona scouts saw him in the streets of Rosario and signed him then and there. He signed his first contract on a tissue paper in a café.”

Siddharth and his younger brother watch even early rounds of the Champions League in their Chembur home. “My father bought a 40-inch Sony Bravia only to watch football,” Siddharth says. “Though I’m an Arsenal fan, on Barcelona game day, I wait for magic to unfold. I’m watching the greatest footballer of my generation. I don’t mind being up till late even if I have hockey practice in the morning. It does not affect my output on the field. In fact, it pumps me up. The coach does not say anything because almost all the players are up watching football.”

The only request the parents of management student Sachin Joshi have of him is to resist the Messi temptation during exams or study leave. But he has to keep tabs on the game every now and then. If Messi is playing an important match in the Spanish League, no longer telecast live in India for its late starts, Sachin catches the live streams on his computer. A player like Messi comes once every few years, after all.

Supriya Bakht, a 26-year-old law graduate from Delhi, says, “Messi has grace, skills and thinking. That’s a rare combination. Normally those who have the grace do not have the ability to think. Messi sees the goals before he scores them.” Surpriya’s enduring football experience is of watching the 2007 Champions League semi-final between Chelsea and Liverpool at Anfield, Liverpool’s home ground, from just about 15 rows behind the goal. “I’m not a Liverpool fan but would have cried had they lost. Anfield does that to you. When they sing You Never Walk Alone, there is nothing like it.” But watching Messi comes close.

Some, like Shaf Shahid, 13, have had the opportunity of seeing a Messi performance in flesh and blood. Shaf was the captain of the Kenkre Academy’s under-12 team that participated in the Mediterranean International Cup in Spain in April 2009. They played two practice matches and three group ones. They lost all. But they gained in experience and got to watch Barcelona play Recreativo de Huelva. “It was unbelievable, even if Messi missed a penalty in that match,” Shaf says.

One of Shaf’s teammates at the academy is Charmil Shah. Charmil turned 13 recently. There was a ring of destiny to his birthday. It was on 6 April, the day Messi scored those four goals against Arsenal.