The Lonely Planet of Kazan 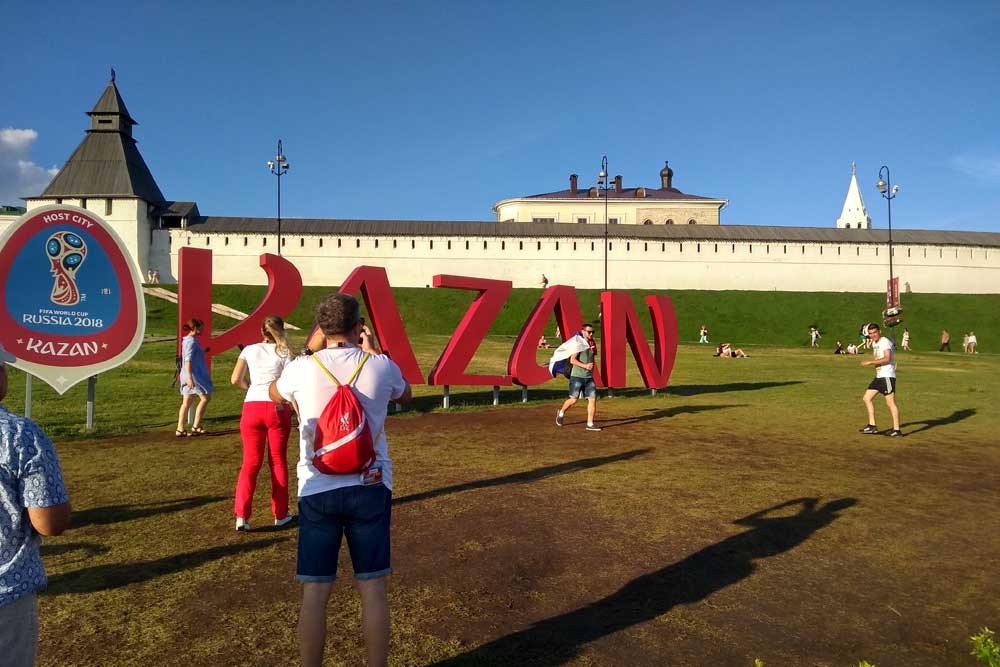 Arkady Viktorovich is from Moscow, the capital of Russia. Golnaz is from Kazan, the capital of Tatarstan (a federal republic in the heart of western Russia). On the surface, they are compatriots; Russians. But when they meet at the bohemian Bauman St in central Kazan, travelling fan Viktorovich and FIFA volunteer Golnaz quickly realise they could well be from different planets.

Golnaz speaks broken Russian, working English and fluent Tatar, her mother tongue. She is 18-years-old and has never been to Moscow. Viktorovich speaks no Tatar at all, can understand some words of English (if spoken slowly) and fluent Russian. In his 47-year existence, this is the first hour he has spent in Kazan. “Sorry for taking so long,” Golnaz tells me as I wait in line behind a Brazil jersey-clad Viktorovich at the information tent. “He wanted to know what to see in Kazan today before the Brazil-Belgium match. But I ended up finding out more about what to do in Moscow when I visit.”

When I look amazed, Golnaz laughs. “It is very common. We Russians, we don’t travel all that much within our country. And foreigners, such as you, also end up only visiting Moscow and St. Petersburg,” she says. “This World Cup has changed that. Football has brought everyone to Kazan.” When she says Kazan, she also means Volgograd and Kaliningrad, Ekaterinburg and Rostov-on-Don, Samara and Saransk; the Russia beyond the Lonely Planet trail has welcomed foreigners and Russians alike, with wide eyes and wider arms.

Over the last three weeks, Kazan alone has been visited by men, women and children from France, Australia, Iran, Spain, Poland, Colombia, Korea, Germany, and now Belgium and Brazil — tourists who had an opportunity that went well beyond simply watching their country play at the Kazan Arena. These tourists soaked in the sights and sounds of this 11th century city and experienced ‘the best that Russia has to offer’, as journalist and football author David Golblatt was told on his podcast Game Of Our Lives.

“We know about the bad stuff. What’s the best stuff that’s going to be on offer in Russia?” Goldblatt asks Russian journalist Sasha Goryunov on his podcast. “So first thing for me is people will discover the cities they have never heard of, never visited,” Goryunov replies. “People don’t realise… 30 years after the fall of the Wall, (Russian) people don’t get out that much. So to get, say, thousands of random Mexicans descending on their city in the middle of Russia, they’d be delighted. They will make (visitors) feel very welcome.”

Welcome, we most certainly feel. “I met a man from Burkina Faso,” says Ilyas, swiping away at the pictures on his phone to give me a show-and-tell at the Dom Chaya, a local eatery that serves Tatar cuisine. “He was the first black man I had ever seen. And you are the first Indian I have spoken to.” Here, he pauses, waiting for me to slurp down a spoonful of sulpa (beef broth) and then adds: “Can I take a selfie with you?”

Ilyas offers to give me a free tour of the Qolsarif, reputed to be the biggest mosque in Europe outside Turkey, which I take up. En route to the mosque, he beams at the fact that he knows two other Indians intimately, although he has never spoken to them. “Vishwanathan Anand,” he says, moving invisible chess pieces with his hands. “And Indira Gandhi.” I tell him that I know a man from Kazan too (although I haven’t spoken to him) — “Marat Safin.” But before I can swing my arm with the ferocity of a Safin forehand, Ilyas steps ahead and laughs and claps at the same time.

As we circumvent around the mosque’s slopes, Ilyas informs me about every other monument in Kazan I need to know about, simultaneously — the Suyumbike Tower, which Ivan the Terrible is said to have built for a Tatar princess named Suyumbike, who killed herself soon after its construction by jumping off the top floor; the significance of the Kazan Kremlin; and the architectural brilliance of the roof at Kazan Arena that drenches only the million-dollar footballers during a downpour. “But before you look up at the roof of the stadium, look around you. In the stands you will see Brazilians and Belgians. And Russians pretending to be Brazilians and Belgians,” says Ilyas. “Ask those Russians, if you can, where they are from. I can assure you, most of them, they are not from Kazan.”

Ilyas nods knowingly, aware that I haven’t understood. So he explains. “If we have to watch football, we watch Rubin Kazan (the local football team),” he says. “For the price of a World Cup ticket, we can do a lot of things. Travel the world, maybe. Or even own a house.”