Times when players would rather a commentator didn’t praise them 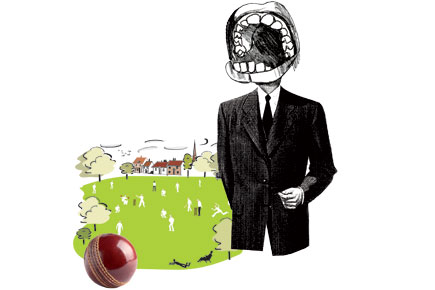 Times when players would rather a commentator didn’t praise them


Ah, that happy time during the just-concluded India-England Test series. It was Day 3 of the first Test. England languished at 144/7 and would soon follow on in chase of India’s mammoth 521/8 declared. All was well, the birds were singing, the pitch was turning and Pragyan Ojha was bowling to Tim Bresnan, with Matt Prior at the other end. Ojha had five fielders holding a seminar around Bresnan’s bat. It was the last ball of the over. As Ojha came in to bowl, TV commentator Paul Collingwood was heard saying that Bresnan was prone to giving catches to close-in fielders. As if on cue, Bresnan obliged. He offered Virat Kohli a catch at second slip. The camera did not capture Collingwood’s reaction, but the guy has a poker face anyway. Co-commentator L ‘Siva’ Sivaramakrishnan offered a clue to Collingwood’s chagrin. Siva said, “Just as you say. It’s the Commentator’s Curse. Don’t worry, Mr Paul Collingwood, it’s early days in your commentary career.”

Siva had invoked a commonly held superstition, at least among television commentators, that players often seem to capriciously do things on the pitch that will embarrass the commentators. So, if a commentator has just praised them, they might commit an awful mistake immediately after, but if the commentator has criticised them, they might prove him dead right. Paul Collingwood had just joined the illustrious ranks of pundits whom fate has mocked so on the airwaves.

Like Collingwood, Indian commentator Arun Lal is well known (and well paid) for his tempered style and his always-plausible pronouncements. If Lal is lucky, he will have forgotten the 2007 India-Pakistan series, in particular, the 2nd One-Day International at Mohali in November 2007. So, just to be wicked, let’s remind him. India set Pakistan a target of 322 to win. Pakistan stood at 195/4, in need of 127 from 83 balls, with their big-hitters back in the pavilion. Lal was on commentary and had just been heard dismissing batsman Younis Khan’s ability to hit the big shots when Harbhajan Singh trotted in and tossed up a top-spinner. In a statement that fate would later hold up to ridicule, Lal said, “Pakistan need a six but Younis Khan is not known for that kind of ability.” Over to Lal for what followed: “…but he’s got hold of this one! That’s into the crowd!” The usually stodgy batsman had swatted a ball from outside off over long-on for a six. That shot changed the momentum of the game, one of Pakistan’s highest run chases at the time. Younis Khan himself went on to score a match-winning 117 (of 110 deliveries). “Just as I said it… he had to connect perfectly,” was Lal’s wistful comment as the shot went into the crowd. Unlike Mr Collingwood, those weren’t quite early days for Mr Lal.

Lal may take solace in the recollection that the Curse had struck another respected commentator in the past. This was during the India-Sri Lanka one-day series, 2007. It was the fourth ODI at Visakhapatnam. India were chasing 259 and looking comfortable at 162/3. Sourav Ganguly was at the crease with 25 against his name; Yuvraj Singh was at the other end, keeping pace with 28 runs. The Lankans needed a wicket, and gave the ball to part-time left-armer Sanath Jayasuriya, who was known for his economy. Late Ranil Abeynaike was in the box. Here’s Abeynaike in his own memorable words at the time: “Sanath Jayasuriya is an experienced bowler. He is going to bowl a trajectory where the Indian batsmen can’t come down the track and attack him.” It so happened that Jayasuriya bowled a loopy half-volley, and Ganguly disco-danced down the track, unleashing a trademark six to long-on. “Just as I say it… he comes down the track and a big hit… that’s gone all the way. Six runs!” The irony was not lost on Abeynaike, but co-commentator Bruce Yardley had to rub it in. “That’s a fabulous shot from Ganguly. You set yourself up for that, didn’t you, Ranil. Ha ha.”

March 2002. England versus New Zealand, 1st Test at Christchurch. It was the second innings of the match. The suave and unflappable Mark Nicholas was in the commentary box. Marcus Trescothick was at the crease, facing Ian Butler. The tall, broad-shouldered opener was batting solidly on 33. He was helped by Butler’s wide and loose bowling, aimed at inducing a nick towards the three slips. Butler slung one in short and wide on the offside, and Trescothick disturbed the boundary line with a lovely square-cut in front of square. Commen- tator Mark Nicholas, who was fate’s rabbit on this occasion, fell to eulogy. “Boy… he’s a very strong backfoot player,” Nicholas said in a breezy, mellow tone. “You bang the ball in short, even if you’re Gillespie or McGrath, you get punished.” The next ball would embarrass both him and Trescothick. It was an identical delivery—short, wide, juicy. Again Tresco- thick cut confidently. It was the same shot as before, but this time he got under the ball. It went into the hands of fielder Daniel Vettori. “Unless of course, huh, unless of course, he clubs it straight to cover,” Nicholas recanted. Marcus Trescothick c. Daniel Vettori b. Commen- tator’s Curse, with England shaky at 50/2. And though England went on to win the match, one Englishman in that stadium must have looked a tad rueful.

In the age of YouTube, when everything is archived online, nothing is deleted and the trivial jostles the embarrassing for posterity’s attention, these Commentator’s Curses aren’t likely to be forgotten in a hurry. Consider, however, the fate of a web commentator, whose every mistake is archived in cold text. During the ICC T20 World Cup 2007, a Super 8 match between ultimate winners India and England was presided over by BBC online commentator Sam Lyon. Lyon was giving a peppy, blogger-like, over-by-over account of the game. By the 10th over, England were at 94/1. ‘The over comes to an end with (Vikram Solanki given another life when he is dropped at square leg by Joginder Sharma… Blimey, O’Reilly, England are giving this a go.’ As Lyon wrote these words, Solanki stood at 43 runs. But when Solanki got out in the very next over (c. Rohit Sharma b. Irfan Pathan), Lyon wrote: ‘That has to be my first Com- mentator’s Curse of the summer, I think? No? Alright, maybe 249th…’He subsequently joked that he was going to see if criticising the England batsmen would make them bat better. It did not, England lost the match by 18 runs, keeping India in the reckoning for the semi-finals.

No one knows the birth date of the Commentator’s Curse, and it doesn’t appear that any commentator wants to remember the birth year either. But soon after man used a stone as a hammer, the first thumb-crushing accident must have taken place. By that reckoning, the Curse has been around since the early days of radio commentary. What is known for a fact is that the term originated among BBC staffers. The King of the Curse was legendary Formula One commentator Murray Walker of the BBC, whom The Telegraph of London quoted as saying, “I don’t make mistakes. I make prophecies which immediately turn out to be wrong.” Seconds after Walker’s praise, F1 aces would lose their lead or otherwise goof up. Walker’s famous catchphrase “Unless I’m very much mistaken…” was matched by his equally famous retraction, “And I am very much mistaken.”

Paul Collingwood can take heart. Sure enough, on Day 2 of the last Test of the recent India-England series in Nagpur, as a troubled India team probably prayed for a double-century from R Ashwin, Collingwood was praising the offspinner as a very capable batsman. He said how Ashwin reminded him of the recently retired stylist, VVS Laxman. Co-commentator Harsha Bhogle cut in with the words, “Colly, Colly, there you go again with your Commentator’s Curse.” Rahul Dravid, the other co-commentator, said he would cancel the Curse out by saying Ashwin was not that good a batsman. Sure enough, Ashwin batted on. Small mercies, though India still suffered a humiliating series defeat.