The Art of Excess

The English media has an unmatched talent for hyperbole. And when they are in the zone, even bald facts can take a ride 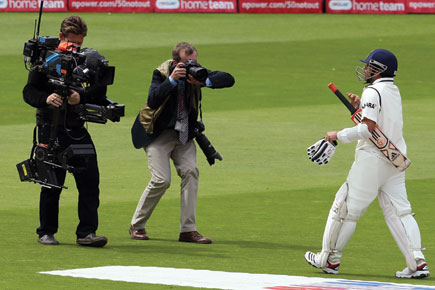 The English media has an unmatched talent for hyperbole. And when they are in the zone, even bald facts can take a ride


Soon after MS Dhoni misjudged the line of a Tim Bresnan delivery and was out for a first ball duck in the second innings of the second Test match at Trentbridge, the English media announced to the world that his fall from grace was complete. “Just a few months earlier, he was the colossus who could do no wrong. Today he is a sorry sight as he walks out of Trentbridge,” declared a commentator on radio. One of his more illustrious colleagues went a step further and affirmed that “England is now the number one team in the world and will remain so for the next five years.” The common thread running through British media coverage of the series, which has gathered strength from England’s win at Trentbridge, echoes a similar sentiment. England, if British media discourse and voluble former England players are anything to go by, is already the undisputed number one team in the world.

While there is little doubt that Andrew Strauss’ men have outplayed the Indians in all departments of the game and are deservingly ahead two to nothing in the series, to suggest that the English are already the best in the business and will be so for the next five years is a clear case of the English love of hyperbole, a trait by no means limited to the boundaries of cricket. The England football team hasn’t won a single major tournament since 1966. Yet before every World Cup, the British press is quick to claim that England has one of the best sides in the world, just a step away from repeating the success of 1966. At the last FIFA World Cup in South Africa in June-July 2010, the build-up by the British media of England’s prospects created such a nationalistic frenzy that when defeat came at the hands of Germany, it was too much to bear; fans went on a rampage in pubs across the UK. The same kind of extreme glorification extends to club football as well. For a section of the British media, club football begins and ends with Manchester United or Chelsea or Arsenal. Despite Barcelona’s clear domination of the Champions League and its considerably greater successes in comparison to Manchester United in recent years, the British will hardly concede being second best.

Or take tennis to understand how the British can slip into denial—and stay there. If media hype could create champions, Andy Murray, the poster boy of British tennis, would have been the reigning star of the game. Alas. Not taking anything away from Murray, it is abundantly clear that the British star is not in the same league as the top three in the business—Djokovich, Nadal and Federer. Not only has Murray never won a Grand Slam, he has hardly ever beaten the trio named here in a Slam. Falling to Nadal regularly in Grand Slam semifinals, time, some suggest, is running out for Murray. Yet, the British press continues to celebrate him as one of the world’s best; he is always one of the pre-tournament favourites before every Wimbledon. Such is the veneration of Murray that his 2011 French Open loss to Nadal was celebrated as testimony of his grit and a happy portent for the Wimbledon to follow. Murray’s victory at Queens in the lead-up to Wimbledon was consequently widely reported as the final act before he overcame Nadal. This was also because Nadal had lost in the Queen’s quarter-final against Jo Wilfried Tsonga, the eventual runner-up to Murray. It was only when he was thrashed by Nadal yet again at Wimbledon that a section of the media went back to their age-old stereotyping of Murray as a temperamental Scotsman. This shift between extremes has been nicely summed up by John Hughson, a cultural historian of British sport at the University of Central Lancashire: “When he wins he is British, but when he loses he will always be a Scot with the emphasis being on always,” says Hughson. “We can’t accept that we can be second best on occasion. Failure to come to grips with the ground reality leads us to overemphasise the significance of certain victories.”

The current series serves as an example of the Hughson hypothesis. For the record, England hasn’t beaten India in India for years, and the English haven’t won a Test series against Sri Lanka in Sri Lanka either. All they have won is the Ashes and are currently two up in the ongoing series. Yet legends like Botham and Boycott, not to mention the herd of English journalists, have claimed that the English have already toppled India from pole position and are the best team in the world by some distance and will continue to dominate world cricket for the next half decade. It is somewhat like the English suggestion that Chris Broad, Stuart’s father, was the modern-day equivalent of Bradman, when he had scored three hundreds on the trot soon after his arrival on the scene. The hype created around Broad did not take more than six months to fizzle out—yet another standout British trait. With Broad losing shine, they had moved on to eulogising a new hero.

While there is no denying that this English side is good, ‘domination’, it must be said, is about winning irrespective of conditions, winning consistently away from home, and doing so over a length of time. Winning in the Subcontinent in hostile conditions, for example, is pivotal to occupying pole position in world cricket. The ability to bat on spin-friendly tracks and bowling in the heat and humidity of India are among the big tests of a player’s fitness and intensity. None of the current quartet of Anderson, Bresnan, Broad and Tremlett has even come close to conquering this frontier yet.

The British penchant for overstatement has lately found yet another object to sloppily drool over—the forthcoming London Olympics. With the Olympics approaching, it is only to be expected that the hype around the spectacle will steadily gather intensity. However, the one-year-to-go celebrations at Trafalgar Square on 27 July, more specifically, London Mayor Boris Johnson’s speech at the event, offered yet another classic example of the British art of overstatement. “The world’s greatest sporting spectacle will be staged in the world’s greatest city,” thundered Johnson to deafening applause from the thousands gathered at the Square. The roads are ready, the people are ready and, in fact, “the Olympic venues are already so ready, we might as well call a snap Olympics tomorrow and catch the rest of the world napping,” he rhapsodised.

His comment on the newly built aquatics centre was the standout feature of the evening. While the aquatics centre has been mired in controversy because of its style of seating, here’s a sample of what Johnson made of it: “Isn’t it mind-blowing? It is an architectural poem; it’s a sinuous wave of beauty. That water looks good enough to drink. It is gin-clear,” prompting a chuckle from IOC President Jacques Rogge, who was present at Trafalgar Square.

While the 2012 organisers have repeatedly emphasised the fact that London will be one of the first games in recent history to stay on budget, a barb aimed at the Beijing Games organisers for their massive overspend in 2008, these claims mask the threefold increase from the original budget of £3.8 billion the organisers had mentioned in their Candidate File submitted to the International Olympic Committee (IOC) in 2005. As documented by Gavin Poynter and Iain Mercury: ‘On January 29, 2008, the House of Commons Culture, Media and Sport Committee met to discuss ‘London 2012’ with Tessa Jowell, then government minister with responsibility for the Games and London. The committee was questioning government ministers, civil servants and 2012 officers for the fourth time about the Games in a little over three months.’ The committee’s primary concern was/is cost overruns. Their interest was stirred by government announcements in March 2007 that the cost of the Games was set to rise from an initial estimate of £2.4 billion to a revised budget of £9.3 billion. To quote Poynter and Mercury again: ‘The revised costs were driven by several factors including the rising price of land remediation, the increased allocation to contingency, tax (the imposition of Vat) and the rising costs of security. To address this cost problem, government and the Mayor of London, committed in November 2007, to the sale of Park land post-2012 to offset any deficits that might arise from the event not covering its costs.’

The threefold increase in budget at a time when the British economy is facing a crippling downturn raises some questions about “the world’s greatest sports spectacle in the world’s greatest city”. It also questions the claim that the Games are within budget, which is being paraded by the organisers as one of their greatest achievements so far. Expect more self-congratulation in the same vein.
Coming back to the present series, I won’t be the least surprised by an Indian comeback at Edgbaston, when Sehwag, Gambhir and Zaheer return. Should a back-to-full-strength India manage to rattle Strauss and company, the same media that is currently singing paeans to their exploits will be at their throats. We’ll see. The series is far from dead.