The Ala Re Sachin

Just how Maharashtrian is Tendulkar? 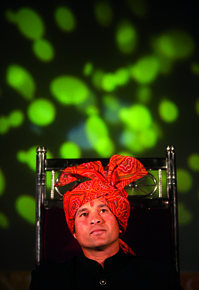 Just how Maharashtrian is Tendulkar?


A couple of years ago, there was a TV commercial for Royal Bank of Scotland. It shows a tailor taking a man’s measurements for a suit. Standing against the light, the man is silhouetted. When the suit is ready, he buttons up his sleeves. The camera slowly rises to the man’s face to reveal his identity. It is Sachin Tendulkar.

The royal blue pinstripe suit—old-school and powerful—does a classy job of signifying Tendulkar’s status. He speaks no lines in the film. Nor does the tailor. The background score, the minimal voiceover, the suit and the wearer’s piercing gaze make an eloquent statement of dignified authority. It is not the most famous Tendulkar commercial ever to air, but captures his aura better than most.

Cut to another image of Tendulkar—in a world that is far different from suits and banking, money and status. Parleshwar Vada Pav Samrat, a prominent vada pav outlet in Vile Parle East, is as blue-collar Maharashtrian as it gets. Its wall bears a large collage of photographs of Maharashtrian celebrities, many of them endorsing the quality of its vada pav. One of those pictures is of Tendulkar, flashing his wholesome smile, the smile of a man who has lived clean and full.

These two Tendulkars straddle both ends of his cultural spectrum. On the one hand, he is a world celebrity who outgrew the profile and lifestyle of the quintessential Maharashtrian long ago. He is cosmopolitan, married to a non-Maharashtrian, Dr Anjali Mehta, and named after a Bengali music director, SD Burman. On the other hand, he is irrepressibly Maharashtrian in several other ways. He loves vada pav, for one. And also Marathi staple food. Jai Bokey, a US-based sports marketer, became friends with the cricketer when he was in India working for Professional Management Group. Once, when Tendulkar happened to be in Pune, where Bokey lived then, Bokey invited him for dinner. Tendulkar accepted it on the condition that the menu would be “varan bhaat poli bhaji”.(‘Varan’ is a mild Maharashtrian dal, ‘bhaat’ is rice, and ‘poli bhaji’ is ‘roti subzi’). His son, Arjun, can eat varan-bhaat with sautéed potatoes every day. Some friends jokingly call Tendulkar not ‘Master’ but ‘Maastoor’, a rustic Marathi pronunciation of the original word.

There are other manifestations of Tendulkar’s abiding Marathihood as well. Anjali speaks fluent Marathi and their children call Tendulkar ‘Baba’—a traditional Maharashtrian term for ‘father’—in accordance with his wishes, reportedly. Says Pravin Amre, Tendulkar’s former teammate and like him a student of Ramakant Achrekar, “Every Guru Purnima, he visits Achrekar sir. He is dressed in ethnic attire on festivals and prefers home food. These are some of the ways in which his ‘Marathipan’ comes through. But one must remember that first and foremost, he considers himself an Indian, and that is why he has always batted with the tricolour on his helmet.”

Sunil Harshe, Sachin’s childhood friend, is at his home in Sahitya Sahawas colony in Kalanagar, Bandra East. This housing estate is where Tendulkar grew up and lived for many years even after he became a superstar, moving out only at the start of the last decade. Harshe, a jovial man with scant regard for convention, wears a half-sleeved shirt over blue Adidas shorts given to him by Tendulkar. As children, the two were the Tom Sawyer and Huckleberry Finn of their colony, often up to antics. In the summer of 1991, Harshe remembers, when his parents were away for almost a month, Sachin spent most days at his house. “We moved all the furniture from the drawing room inside, laid down mattresses, got stacks of video cassettes and saw tonnes of movies on a VCR Sachin had won in some tournament,” he says, “We slept and got up when we wanted, ate all kinds of things.”

Sahitya Sahawas has nine buildings, each named after a Marathi poem; all but three of the 84 families living here are Maharashtrian. “We weren’t jingoistic,” says Harshe, “There wasn’t [any of] what you call ‘Marathi baana’ or being a Marathibaaz. But by default, it was a very Maharashtrian atmosphere.” Dozens of friends, hours of playing, and going home reluctantly only to wolf down meals—it was a life with every sort of competitive activity packed in. “Shigrupi, gotya (marbles), bhavra (spinning top), tikkar (hop-scotch), lagori, chor-police, cricket and even tennis, we played everything,” says Harshe. To gauge how Maharashtrian Tendulkar is, one must understand what marks a member of the tribe out in the first place. Here is a rough shortlist of characteristics: serious about studies; physically not too large nor slight; a fondness of cultural activities; a love of cricket; and a tendency to refer to Marathi icons by initials or first names. Such as Pu La for PL Deshpande, Ga-di-ma for GD Madgulkar, Bhimsen for Bhimsen Joshi, Lata for Lata Mangeshkar, Sunil for Sunil Gavaskar, and of course Sachin for Tendulkar.

Maharashtrians are usually middle-of-the-roaders who go about their lives quietly, rarely wanting to stir things up. Most prefer to weigh in on the side of moderation, which may explain why Tendulkar steered clear of controversy throughout his career.

Tendulkar has always maintained he is proud to be Maharashtrian and fellow Marathi speakers have always had a sense of ‘aaplepana’ (kinship) with him. Yet, 25 years of success, celebrity and global travel, of interactions with world leaders and CEOs, have expanded his horizons enormously. What’s admirable is how he has kept his old world ties without clinging to them. His move from Bandra East to West about a decade ago was symbolic. Geographically the two neighbourhoods are just a few hundred metres apart.

Culturally, they are different worlds. From a colony named Sahitya Sahawas, he moved to a building called La Mer, and then to his current home, a bungalow in a quiet lane on Perry Cross Road in the same suburb. In Sahitya Sahawas, his next door neighbours were Velankars and Deshpandes. In La Mer, his neighbours were Aishwarya Rai and Prahlad Kakkar. Today, when Tendulkar speaks Marathi, he cannot avoid using English words.

There is another thing about Tendulkar that is an anomaly for Maharashtrians: his ambition. At the start of his career, the wow factor about Tendulkar was his precocity. It seemed incomprehensible that a 16-year-old could face Imran Khan and Waqar Younis. Or an 18-year-old could score a century against a rapacious Australia in Perth. It was hard to imagine that a 22-year-old Indian boy would sign a contract for $7.5 million when such figures were only associated with tennis champs and golfers. The previous most lucrative contract was Mohammad Azharuddin’s reported Rs 50-60 lakh Reebok deal.

But as the years went on, Tendulkar’s wow factor became his records and longevity. Now, it seems incomprehensible that anyone would hit 100 centuries and play 24 years. Hundred hundreds is possibly the most remarkable stat in contemporary sport, and also the record least likely to be beaten. Such hunger is hardly ever associated with Maharashtrians. Yes, there have been a few insatiable achievers like Lata Mangeshkar, Asha Bhosle and Gavaskar. But they are exceptions. The typical Maharashtrian often has the skill and discipline but not the bellyfire to go the whole hog.

Tendulkar, of course, did all that and then some more. And he inhabits two worlds apart with such ease and adaptability, perhaps not seeming so Maharashtrian has to do with his being one at heart. “He is a connoisseur of red wine,” as Harshe says, “but he can have drumfuls of sol kadhi or kokam sherbet.”