At the Asian Games, Neeraj Chopra and Hima Das make India dream of track-and-field medals on the world stage 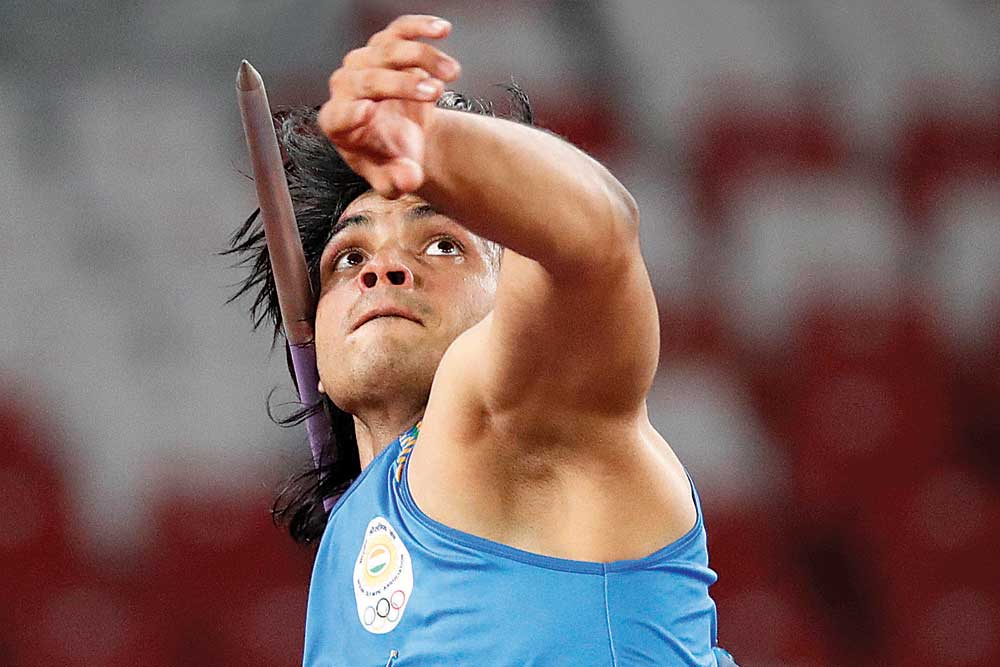 THERE’S SOMETHING PRIMAL about Neeraj Chopra when he stands at the top of his mark with a spear in hand. Maybe it is his alarmingly large arms (all three muscle groups: shoulders, biceps, triceps) protruding out of the sides of a slender vest. Or perhaps it is the way he sways his hair—a shock mop last seen on the members of the band Kiss—out of his eyes, always before flaring his already wide nostrils and exposing his teeth. And then there’s the javelin itself, which, in his cocked wrist, seems less like a javelin and more like an assault weapon. In vastly different circumstances, it isn’t difficult to imagine a bunch of hard-pressed men running at the other end of Chopra’s field, some zigging, the others zagging.

At the Asian Games in Jakarta, Chopra smacked his posterior with the free palm to signal the beginning of the first of his six attempts. And then he was off, breaking into a hurtle—a thing of beauty even if witnessed in isolation. Unlike most professionals in this field, who have measured steps in the build-up to their throw, Chopra was quickly at full tilt. In all of 19 strides and before reaching the edge of the crease, which one mustn’t cross, he had hit top speed, arched his back and dropped his elbow to load his throw and launched the spear with a growl that emitted from somewhere below his gall bladder.

Even as the javelin wooshed towards the peak of its parabolic path, Chopra’s physical exertions—which an athlete refers to as ‘process’—on the ground hadn’t yet reached completion. To apply the brakes on his run, Chopra leapt in a direction perpendicular to that of his fast moving body, falling on all fours and decelerating to rest on his palms, inches before the foul-line.

Across the stadium, the javelin fizzed into the night and pierced through wet turf a little beyond the 80 m mark. Chopra wasn’t even looking, what with his back turned to the landing area. Yet, just by how great everything preceding his throw had felt—from the momentum caused by his legs to the way the spear exited his grip— he knew exactly how far and how well he had hurled it. And before the distance had been measured, Chopra had raised his arms up in the air. The electronic screen revealed that he had cleared 83.46 metres. Had Chopra worn his jacket and walked off the Gelora Bung Karno arena following just this attempt, he would’ve still won gold: In 72 separate throws by 12 other competitors, no one else had even breached the 83 m mark.

But Chopra wasn’t competing against the best of Asia. He was competing against himself—a boy who is ripe to take on the best this planet has to offer. Which perhaps offers a semblance of an explanation into why in two of his next three legal throws Chopra twice went past the 86 m barrier; on one of those occasions even shattering his and this country’s personal best, and the sixth best throw by anyone in the world, anywhere in the world in 2018. Chopra, if it must be spelt out, was competing against perfection—a standard seldom (if never) used to describe India’s track-and-field athletes in the past.

To get an insight into what makes a world-class athlete tick, watch Chopra’s body language between throws. Now, javelin as a discipline is prone to several stoppages, given that the thrower’s run- up strip lies bang across the eight lanes of the stadium’s centrepiece, the 400 m track. During the men’s javelin final on August 27th, the event was paused on a number of occasions. For the men’s 400 m hurdles. For the women’s 10,000 m heats. For three distinct victory ceremonies (a long hold thanks to the national anthems). During these gnawing interruptions, the javelin finalists tended to congregate by the pole vault landing mat for a breather. Not Chopra, this herd’s black sheep, always found grazing alone—stretching his limbs, talking to self, shadow-practicing his throws.

Moments before it was his turn to throw the javelin for the third time, Chopra’s run-up was put on hold by the girls in the 3,000 m steeplechase. Just after the last of them splashed by, Chopra hissed, stepped on the throttle, loaded the weapon, released it and collapsed, roaring on the ground as the javelin travelled over more air and land than it had ever before when thrown from an Indian’s hand. Forget the Asiad, the resulting distance of 88.06 m would’ve won him gold at the London Olympics in 2012 (by over three metres). The mark would’ve seen narrowly missing out on silver at the Rio Olympics from two years ago—a year, incidentally, when Chopra was still competing in and annihilating the junior field. Such has been his rapid and remarkable rise.

With his record throw in Jakarta, Chopra beat China’s Liu Qizhen by 5.84 m, the biggest gap between gold and silver in the history of the Asian Games. Qizhen wouldn’t have even finished on the podium were the discipline’s ranking system not based on recording only the best throw by an individual; for Chopra’s four legal throws were the best-four of the meet – technically making him the gold, silver and bronze medallists. And the first of the also-rans, all at the same time.

Medals, even the top ones, at the Asian Games are not yardsticks to world domination. The fact still remains that no indigenous Indian has medalled at an athletics event in the Olympics (Norman Pritchard, an Englishman born in Calcutta, won two silver medals for British India at the Paris Olympics in 1900). Eighteen summer Olympiads have passed since the country’s independence and India’s tally at being the strongest, highest or fastest (for that matter, third strongest, third highest, third fastest) across any track or field discipline remains zero. But here’s the thing about that abysmal record: Chopra, the 20-year-old from Panipat, Haryana, is yet to compete in an Olympics. Neither has an 18-year-old from Dhing, Assam, by the name of Hima Das.

In half-a-year, Hima Das has bettered her personal best of five occasions, shaving well over a second off her 400m timing

DAS HAS A streak of gold running through her hair. It originates just above her right temple and sneaks all the way up to the bun, tied at the top of her tiny head. It had appeared, suddenly, after the teen had returned from a youth championships in Bangkok a couple of years ago. It was her first trip abroad. “What on earth have you done?” her coach is said to have asked her. She laughed and promised it “will become a trend one day”. Today, that ‘trend’ is seen in over 9,000 posters that are visible all over Guwahati, most of those posters sprouting up since July, when Das became the first Indian woman ever to win gold at a World Championships (at Tampere, Finland), albeit at the Under-20 level.

Just three years ago, the only running Das had done was on a football field. Now, she is in the 400 m final of the Asian Games. As the camera focuses on her, she strikes her signature pre-race pose, a routine made famous by another man who inadvertently stumbled upon his running talent on a different field; Usain Bolt was once an aspiring fast bowler, who ran faster than he bowled. In an Indian context, her rise on the track has been just as meteoric. In March this year, just five months ago, Das broke the 52-second barrier for the first time, with a time of 51.97 second. Then, at the Commonwealth Games in Gold Coast, Australia, she bettered her personal best in the semi-finals, with a time of 51.53 seconds, and again in the final, with a time of 51.32 seconds. It was good enough only for a sixth place finish.

Das broke her personal best yet again in the space of five months, a day before the Jakarta final, in the heats. But this time, the personal best was worth a whole lot more. Clocking 51 seconds flat, she broke the long-standing national record of 51.05 seconds, set when she was four years old. That wasn’t all. Das’ time was also faster than the Asian Games record by 0.11 seconds. But so was the time of a fellow qualifier from the same heats, Bahrain’s Salwa Eid Naser, who clocked 50.86 seconds. Athletes don’t usually push themselves in the qualifiers, but no one seemed to have told Das and Naser that. The next fastest finalist was 2.75 seconds slower than Das. The final, then, was always going to be a two-mare race.

Naser, however, is a runner of rare pedigree. All of 20 years old, the Nigerian-born girl is already the fastest female Asian ever over her distance (49.08 seconds) and the fifth fastest in the world in the 21st century. Das did well to simply keep abreast with her in both the semis and the final. It made for incredible television—Naser’s long silver dreadlocks chased closely by Das’ gold-streak, with the rest of the pack not even in the same broadcast frame.

Naser won with a time of 50.09 seconds, rewriting the Games’ record. Das finished second with a time of 50.79 seconds, rewriting her (day-old) national record. Half-a-year-ago, her best runs around a 400 m track were never below 52 seconds. Now, five months and five personal best timings later, she had reached the mid-50 seconds mark. Shaving off close to one- and-a-half seconds in a short distance run in the space of months occurs in the rarest of circumstances. But so is finding a running talent such as Das in this country. The silver around her neck on the podium was worth more than the shinier metal worn by many of her compatriots.

Most of India’s medal haul across track and field was won not due to drastic improvement in the athlete’s performance, but because the said athlete was competing against a sub-standard field. This, of course, wasn’t the case with Das, who pushed herself, and in turn pushed a world-class athlete, to claim silver—a disc worth its weight in Olympic hope. And this most certainly wasn’t the case with Chopra, who, in the process of bettering himself, became the best that a country has to offer.