Somdev Devvarman, India’s Davis Cup hero, was US college circuit champion two years in a row. Though these winners haven’t done too well on the pro circuit, he has the heart to buck the trend 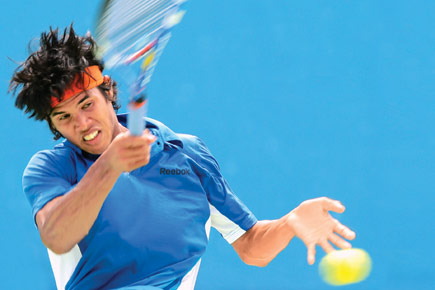 Unlike other US college circuit champions, Devvarman could become more than a footnote in tennis history.


One had played a Wimbledon final. He lost, but his massive serve and solid volleys made him a feared opponent among the pros. The other was short and compact, speeding around the court, smooth strokes pinging off his racket. He would soon win the biggest prize in US collegiate tennis—the NCAA (National Collegiate Athletic Association) singles title—and turn pro.

Kevin Curren, the Wimbledon finalist. Steve Bryan, the NCAA winner. Practising together on a University of Texas court in Austin, sometime in 1990. Nobody else around but me, watching from immediately above one end of the court. An enthralling enough spectacle that I went often to watch them rally, once or twice even prompting quick smiles of recognition.

Tennis is a sport in which watching it on TV has zero to do with watching it close-up. Even just practising, these two slammed the ball with power and precision that took my breath away. Executed just below my nose, Curren’s monster serve seemed like it would need to be returned from somewhere near Siberia.

Yet little Bryan blasted it back with interest, often enough wrong-footing the taller man as he closed in on the net.Now I play tennis, and in those days I played a lot on that very court. It is one of my lifelong regrets that I never asked either Bryan or Curren to hit with me. Perhaps I was intimidated by their skill. Yet I had played many times with friends who had been on American college teams. I didn’t embarrass myself. Okay, they were not in Bryan’s league. Still, I should have asked. If watching them did things for my game, what would practising with them have done?

If you follow tennis, you probably remember Curren. He had a barnstorming run to the Wimbledon 1985 final, blowing away John McEnroe and Jimmy Connors before turning into one of the game’s many footnotes: whom did Boris Becker beat for his first Wimbledon title?

In 1979, Curren had himself won the NCAA title that Bryan would win in 1990. Yet even a tennis fan would probably ask, “Bryan who?” He did turn pro after that NCAA triumph, but did very little at the senior level.

Maybe there’s a lesson there for Indian fans, looking at Somdev Devvarman as the next great hope for Indian tennis. For Devvarman is an NCAA titlist too, and twice in a row (2007/08). In fact, Devvarman might even have made it three in a row—he was the beaten finalist in 2006. American collegiate tennis is intensely competitive, so this record speaks of a seriously talented player. And if that’s not enough, there’s his recent stirring Davis Cup wins over the best South Africa has to offer; the second match, a victory over Rik de Voest from two sets and a service break down in the third set.

Earlier, he defeated Izak van der Merwe in the first singles. A little before that, he won four matches at the US Open, three in the qualifying rounds and one in the main draw. He thus became the first Indian player since Prakash Amritraj in 2002 to play in the singles main draw of a Grand Slam tournament.

Yet the million dollar question: how far will he go in the pros?

History is against him. The majority of NCAA champions don’t do much in the pros. The last to even reach a Grand Slam final was Mikael Pernfors, who was also the last before Devvarman to win back-to-back NCAA titles (1984/85). In 1986, Pernfors rode his heavy topspin strokes and bounding court coverage all the way to the French Open final, where a certain Ivan Lendl hammered him. John McEnroe, top of the NCAA heap in 1978, remains the last collegiate champion to win a Slam.

Since then, NCAA winners have been less tennis forces than footnotes like Curren. Yet before McEnroe, the NCAA winners’ list has illustrious names like Connors, Ashe, Smith and Trabert, all Slam champs. What happened after the late 1970s, and what does that mean for Devvarman?

The game of professional tennis has moved on and up, to another level completely. The premium on fitness and power means that the really talented players turn pro as soon as their bodies mature. If they want a successful pro career, they’re better off skipping college altogether, instead of wasting their most athletic years chasing a degree. So if American collegiate tennis remains fiercely competitive, it really isn’t a springboard for success in the pros.

Thus none of the recent generation of Slam-winning American superstars—Chang, Courier, Agassi, Sampras and Roddick—even enrolled in college. McEnroe? After winning the NCAA tournament as a Stanford freshman, he dropped out to turn pro. Becker was a 17-year-old when he defeated Curren for that Wimbledon title: not only did he not attend college, he did not even complete high school.

All these champions made marks in the pro ranks by their late teens.

In contrast, Devvarman’s four years at the University of Virginia means he is already 24, a year into his pro career. These days, that is positively middle-aged in tennis terms. McEnroe won the last of his seven Slams at 25. Roger Federer had won six Slams by the time he was 24. Rafael Nadal, winner of six Slams, is a year-and-a-half younger—younger—than Devvarman.

The writing is clear: the ranks of professional tennis players are filled with powerful teenagers and early twenty-somethings who will steamroll even NCAA champions.

So what can an Indian tennis fan expect from Devvarman? He has a solid all-court game and a refreshingly positive attitude: “I belong with the big boys,” he said from this year’s US Open. He is extremely fit and hard-working, something few Indian players can claim to be. Without top-level fitness, he would not have been to play the four-hour, 43-minute marathon against de Voest in the Davis Cup.

That will make him one of the dangerous floaters who lurks in the early rounds of the Slams—the men who will pull off a stunning upset or two, whom the stars remain wary of, but who don’t have the game to go several rounds. His ATP ranking will probably peak at about 75. He may find more success playing doubles, where teamwork rather than individual brilliance wins you matches. He will also do well in the Davis Cup, where the charge of playing for team and country often lifts players to spectacular feats.

In short, we can expect what previous Indian tennis stars have given us—Paes, Bhupathi, Amritraj, Krishnan junior. When Devvarman enters a Slam, we’ll rejoice in his first-round victory, like the straight-sets pasting he administered to Federico Gil in New York.

Then we’ll mourn the second-round loss with its moments of flair, like his four-set battle with Philip Kohlschreiber in which Devvarman raced through one set 6-0, but lost the other three. After that, he’ll play Davis Cup and dazzle us with hard-fought, inspiring triumphs.

That is, the roller-coaster of the last few weeks might just be a microcosm of Devvarman’s professional career.

After Steve Bryan won his NCAA title in 1990, he was interviewed by Sports Illustrated magazine. SI described him as a ‘mentally tough and terribly earnest’ young man who had won the final ‘with a blazing demonstration of cunning and consistency’. Now of course I had only seen him practising. Yet those words fit the man I knew from that Austin court. Even just trading blows with Curren, he was muscular, clever and precise in his shot-making. On the verge of turning pro, Bryan told the magazine: ‘I can see myself in the Top 30.’

Realistic, you might think. The guy knows he won’t make it to No 1, but a top-30 player can still have a solid and lucrative career in the game. Nothing to sneer at.

Reality bites. In 1994, Steve Bryan reached his highest ranking as a pro: 80. Three years later, still only 27, he read the writing and retired. I was left nursing the hope that I’ll run into him one day, remind him of those sessions with Curren, and get out on the court to hit with him.

This is the career pattern of NCAA champions. It might be Devvarman’s too. I hope it does not pan out that way, that someone will find me and rub my face in this article when Devvarman pulls off a Wimbledon championship.

He showed a warrior’s courage in winning both his matches in the crucial, memorable Davis Cup confrontation against South Africa in Johannesburg last weekend. Therein lies my hope of being proved wrong.