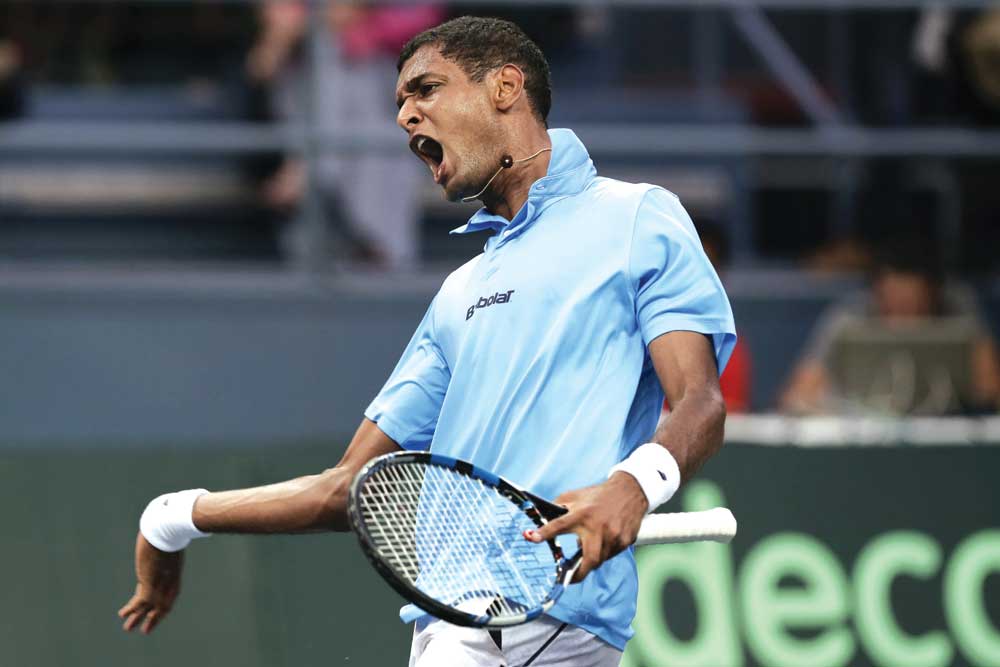 RAMKUMAR RAMANATHAN IS bouncing the tennis ball on the baseline of a grass court in Antalya, Turkey. A lanky lad, Ramkumar has to bend his spine unconventionally low to sustain the nervous, dribbling motion of the ball. Some eighty feet away on the other side of the net, Dominic Thiem is crouched as well—in anticipation, swinging his posterior from side to side.

Around them, a handful of spectators shuffle back to upright positions on their seats as spectators generally do on match point. But none of them—not the paying public, not Thiem, not even Ramkumar —are fully aware of just how monumental the next point is going to be for the health of singles tennis in India.

In age and physical stature, there is little to separate Ramkumar and Thiem. The Indian is 6 ft 3 inches and 22-years-old, the Austrian 6 feet 2 inches and 23. Both were drawn to the sport thanks to their tennis-loving fathers. Both turned professional in their teens. Both use Babolat racquets. But that’s where the similarities end. As far as achievements since turning pro are concerned, until this point at least, the two are a galaxy apart.

Thiem is ranked No 8 in the world and is a two-time Grand Slam semifinalist, the second of which occurred less than a month ago at the French Open. Ramkumar, ranked No 222 in the world, has never qualified for a Grand Slam. The Antalya Open was only his seventh appearance in the main draw of an ATP event. This unlikely pre-quarterfinal match in Antalya, by every device of measure, was supposed to be a no-contest.

Ramkumar stops bouncing the ball, uncoils his torso and curves up a toss. A whipping serve is fired towards Thiem’s backhand. The ball skids off the white paint on the T, and thumps into the hoarding at the back. Ace. “Game, set and match, Ramanathan,” says the chair umpire, “Six three, six two”.

Thiem pulls his sweaty cap low over his eyes in defeat and walks towards the net for the ceremonial handshake. But he is made to wait momentarily by a spiritually charged Ramkumar, who drops his right palm to the grass below and presses the said palm over his eyes, his neck and then his chest. The moment was more than just a blessing for Ramkumar’s career; it was also divine intervention for a nation deprived of promise on the singles court.

The last time an Indian beat a top-10 singles player, we were a whole lot younger. Ramkumar was only three when Leander Paes defeated Pete Sampras in New Haven, back in 1998. Paes, of course, went on to give up his dreams as an individual player soon after and became one of the greatest doubles specialists of all time.

I am a singles player. You’re not going to see me make the switch to doubles

That path which Paes hacked for himself from the weeds became a busy highway when the who’s who of the following generation followed suit. Sania Mirza and Rohan Bopanna, both brimming with singles potential, also found enough success in doubles to never look back. And when Sumit Nagal won the boys’ doubles title in Wimbledon in 2015, the writing was on the Indian tennis wall: ‘No stags allowed’.

Then, out of nowhere, came Ramkumar.

“I am a singles player today and I am working towards becoming a successful singles player someday. You’re not going to see me make the switch,” he says in an interview to Open. The conversation took place shortly after his quarterfinal loss in Antalya to Marcos Baghdatis, a vastly experienced Cypriot who made the Australian Open final back in 2006.

Ramkumar had won the first set, 7-0 in the tie-break. Baghdatis then clawed back, winning the second set 6-3 and soon found himself up 6-1 (5 match points) in the third set tie-break. Defeat for Ramkumar was of course imminent, but it was the manner in which he lost that gave singles tennis in India a reason to believe yet again. Holding his nerve and saving one match point after another, Ramkumar brought the tie-break back on level terms at 6-all, forcing Baghdatis to dig deep into his reserves and snuff out the match 8-6.

“I wish I could have completed the turnaround against Marcos, but I was very exhausted by the end,” says Ramkumar. “Still, all said and done, Antalya will always be special to me. Even many years later, I know I am going to remember this tournament fondly. For it could well be the turning point in my career.”

“SEE, THERE ARE possibly two separate reasons for the win my son pulled off over Thiem,” says Kumarappan Ramanathan, Ramkumar’s father. “The first is this. Realise Thiem was playing on grass, a surface that does not suit him as much and realise that Thiem had just come from a gruelling clay court season. Also, Thiem was playing a boy who was ranked outside the top-200. He must have looked at Ram’s ATP stats page and seen that he isn’t very consistent and taken it easy. That is the first reason.”

Antalya will always be special to me. I know I am going to remember this tournament fondly. For it could be the turning point

And what would be the second reason? “That Ram simply outplayed Thiem, that’s a possibility too,” says Ramanathan. “Whichever way you choose to look at it, it cannot be denied that it was a win over a top-10 player for my son, and a great day for both his career and Indian tennis.” It was also a day when Ramkumar became India’s No 1 singles player for the first time and broke into the top-200 (at No 184).

When asked what Ramkumar’s greatest strength is, Ramanathan says: “The one strength that is greater than all his other strengths (tall, big serve, big forehand) is he is getting more mature now. So he has taken his fitness very seriously and because of that, he is able to consistently rattle players ranked in the top-100.”

Rattling top players seems to be something of an innate ability, right from his very first ATP tour-level match three years ago. Back in 2014, having come through the qualifiers, 18-year-old Ramkumar, ranked 526 in the world, beat Somdev Devvarman, India’s then top singles specialist with a ranking of 90th in the world, in the opening Chennai Open round. And he didn’t do this quietly.

On the court, he had a penchant for theatrics, constantly stirring up a frenzy with his hands (the Chennai crowd obeyed), punching the air after points and sometimes even bellowing “Vamos!”. We would learn later that Spanish utterances came easily to him as he had spent the previous two years at the Sanchez Casal Academy in Barcelona, an academy that had trained the likes of Nadal and reigning world No 1 Andy Murray.

Why Spain, I asked him back in the day. “Thirty out of the top 100 players are from Spain. Why would I go anywhere else?” he replied. There, on those dirt courts, Ramkumar achieved two things. One, he began mastering a deep hitting topspin game. And two, he broke away from the Indian tradition of pinning one’s aspirations on a coaching stint in the US. When he finally did move to North America earlier this year, on coach Emilio Sanchez’s advice, it was with a singular purpose in mind: physical power.

“Moving to Naples, Florida wasn’t about tennis at all, it was all about the body,” Ramkumar says. “I felt pretty out of shape at the end of the previous season and it had started affecting my tennis. So I got into this training programme to make me physically stronger—a daily diet of push-ups, bench presses, pull-ups, lunges—and that made me mentally stronger too. I think all that hard work is beginning to pay off.”

It has. Since his time at the boot camp, Ramkumar has played on-the-trot tournaments for seven months—in Chennai and Pune in India, San Francisco, Tempe, Indian Harbour, Orlando and Irving in the USA, Guadalajara and Leon in Mexico, Bengaluru for the Davis Cup, Taipei, Tallahassee and Savannah in the USA, Karshi and Samarkhand in Uzbekistan, Singapore, the French Open qualifiers, then Singapore again, Caltanissetta in Italy, Blois in France and then Antalya in Turkey. Seven months of non-stop travel and tennis, without burning out.

“We never get to see him at home,” says Ramanathan. “He keeps saying he will come, he will come. Then last minute he says, ‘Dad, this or that tournament has come up, I will come later’.” Ramkumar laughs and attests that he had promised his father to visit Chennai in late June this year. “Then Emilio asked me to go to Antalya and try out the qualifiers instead. So I went.”

After breezing through the two-stage qualifying process and entering the main draw, Ramkumar had his eyes set on his first round opponent, Brazil’s Rogerio Dutra Silva, ranked No 68 in the world. “I had lost to Dutra Silva in Milan two years back,” he says. “So I was really looking forward to a re-match and I was telling one of my close friends about how I would like to beat him this time.”

But Ramkumar’s friend brought to his notice another top-100 player in the draw. “He told me that if I get past Dutra Silva, I will meet Thiem,” Ramkumar says. “I hadn’t noticed that before. So I told my friend, ‘Oh, if that’s the case, then I’ve got to beat Thiem too’.”