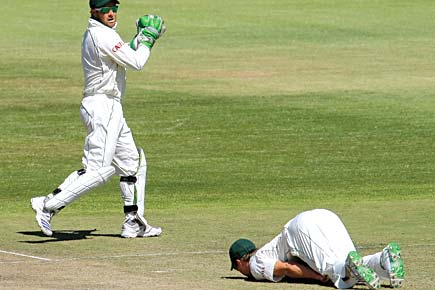 Man’s love of sport comes at a risk. It endangers the safety of the precious bling he carries in his scrotal sack


MAN’S LOVE for sport comes at a risk. It endangers the safety of the precious bling he carries in his scrotal sack.

A blow in the testicles is every man’s nightmare. That is why Dilip Vengsarkar says a batsman has to be “absolutely foolish” not to wear an abdominal guard. The valiant sentries at silly point or forward short leg also wear the guard, or ‘the box’, or more colloquially, the ‘goti pad’. Footballers cover not their heads but their private parts when lined up for a freekick wall. The rules of boxing and martial arts prohibit hitting below the belt. With the exception of breaking or tearing something, the crotch torpedo is the worst that can happen to a player in a contact sport.

There are two reasons. The first is the frightening if relatively temporary pain. The second is the high importance of the groin in that vital activity elders and gynaecologists in India diplomatically refer to as “married life”.

Twenty-five-year-old Abhishek Nayar is a rising star of the Mumbai cricket team. He played for the Mumbai Indians in last year’s Indian Premier League. He was hit in the groin in a match in 2005-06 and needed two months to recover. He says, “I was not wearing the box. In younger days, I was casual about it. After I got hit, I decided it was time I wore one, have a good family life in future.”

In the tied Test between Australia and the West Indies in Brisbane in 1960-61, Wes Hall hit Bobby Simpson, opening for Australia, smack in the groin. Simpson was in agony. Hall said, “Bob, if you can still get it up, you can use my apartment.”

Dr Sanjay Garude, orthopaedic surgeon, arthroscopist and a club-level cricket player, explains why the genital zone is where it hurts the most. “The pain perceived is high because of the nerve-endings in the groin area,” he says.

Fingers and toes, too, possess rich deposits of nerve-endings, the fickle devils that provide ecstasy as well as agony. Nayar says a knuckle injury he suffered was more painful than the groin blow. But it is only a finger or toe at the end of the day, and it’s the other digit whose well-being is more important to men. After all, no nawab got aphrodisiacal oils rubbed on his finger.

The sequence of events after a player is hit usually unfurls thus—“We ice the area as much as we can,” says Dr Aijaz Ashai, physiotherapist, Mumbai cricket team. “We then check if the player can make hip and leg movements. If not, there could be a hairline fracture in the pubic bone.”

But Dr Ashai adds, “I’m talking about a worst case scenario. The ball hitting the groin directly is rare. The batsman faces the bowler sideways. His thigh and bat do not allow the ball to come near the groin. Besides, the thigh pad and groin guard can withstand the ball’s impact.”

As an Indian, you have played some form of cricket, however disastrously. One day the bullet no sportsman can dodge got you. As you sank to the pitch, someone older and wiser made you lie down, on your stomach or back. He folded your legs at the knee and pressed them towards the stomach or back. Well, he was an idiot. He got away only because it was not a cricket ball. “Making the guy lie down and pressing his legs down is wrong because it might aggravate a fracture,” says Dr Ashai, “A fracture would take six to seven months to heal.” If there is local bleeding, a hematoma, it may take three to 12 weeks.

The abdominal guard is made from hard plastic. It is the equipment a cricketer’s wife quietly ensures is in her husband’s bag when he leaves for a tour. Batsmen or close-in fielders slip it into their jock strap so that it cups the scrotum. The guard is available in the following sizes: boys, youth, adult and, some say, Clive Lloyd.

The quality of the guard has improved over the years. “It used to be basic,” says Aditya Mahajan of BD Mahajan and Sons, a cricket equipment maker. “Then, around ten years ago, they were made with felt padding. Over the past five years, they have PU padding. The curvature of the guard is such that pain is distributed and absorbed. Good companies subject their gear to impact-testing….”

“It is better now,” Vengsarkar says, about the quality of protective gear. “However,” he adds cryptically, “it depends on the individual.”

With bowlers firing away at 140 kmph and more, with manufacturers of equipment for other sports using newer, hi-tech material, hard plastic seems a primitive choice for a job so difficult, an ill-equipped David pitched against the mighty Goliath that is fast bowling. Why not modernise? “Not feasible,” says a manufacturer who doesn’t want to be named. Upgrading, he says, would raise the price. Sales would go down. Indians, he says, do not enjoy spending.

“What is a hundred rupees to a member of the Indian team? But I know one who would borrow a teammate’s guard,” he says. “Will you wear someone else’s underwear? He picked up an allergy
and had to miss a bit of cricket. In India, a whole amateur or club-level team makes do with four or five guards.”

The guard is the second line of defence against the missiles of fast bowlers. The first is the player’s skill. Batsmen use technique, reflexes, courage and a good eye to prevent themselves from being hit in their Michael Ballacks, as a commentator said during the 2006 football World Cup.

“Each time I was hit on the body—that was rare, though—-it made me more determined…my reflexes improved,” according to Vengsarkar. He says he was never scared. Not on a cricket pitch. “I have a fear of staying alone in a hotel room at night, though.” Ajinkya Rahane, the 20-year-old batsman who scored 1,089 runs for Mumbai in their winning Ranji Trophy campaign in 2008-09, relies on his eye. “When I was 14, I was hit there,” he says, ‘there’ meaning the crotch. “It was painful, though I was wearing a guard. My mantra is to watch the ball… I do meditation and yoga to improve concentration.”

Batsmen are required to play long innings in Tests. Pakistan’s Hanif Mohammad batted 16 hours and ten minutes to score 337 against the West Indies in 1958 in Bridgetown. It is a world record for duration of a knock. Rahul Dravid holds the Indian record. He was at it for 12 hours and 20 minutes, erecting 270 against Pakistan in Rawalpindi in 2004. Long innings ratchet up a batsman’s statistics but, according to a hypothesis, are not ideal for his sperm count and health. It is not good for the scrotum to spend hours in the tight, heated confines of a guard, even if it is made with Adidas’ climacool technology.

It is well-known that cyclists, who wear tight clothing and ride for hours, generally have low sperm scores. “If you are riding your bike five, six, seven hours a day, you are not a sex champion,” Lance Armstrong once said.

But it must be said, Hanif and Dravid both fathered healthy children.