We played carom. If someone made a great connection, Sachin, kissing his own fingertips, would say, “Chumma shot”. 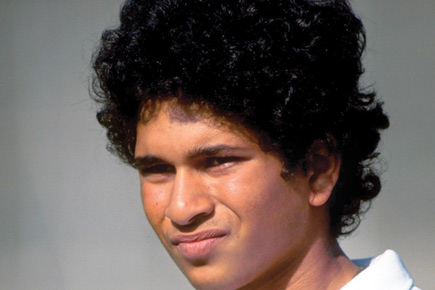 We played carom. If someone made a great connection, Sachin, kissing his own fingertips, would say, “Chumma shot”.


Doing things for a lark has its benefits. I can vouch for that after the events of 10 October 1990.

Mid-term examinations were on in my college, Narsee Monjee. It was not mandatory to appear for them. On a whim, a friend and I decided to visit another friend, Sunil Harshe. Sunil lived in the Sahitya Sahawas colony, Bandra.

We had heard Sunil was a friend of Sachin Tendulkar. But this had nothing to do with our decision to hop onto the bus. We just wanted to kill time.

When we rang Sunil’s doorbell, his mother told us that he wasn’t home. “He’s gone out with Sachin,” she said. So he really was Sachin’s friend.

Then it happened. The first sighting. As we jogged out of the wing into the open, an indigo Maruti 800 eased to a stop in front of us. Sunil, in the passenger seat, looked at us, a bit surprised. Also looking at us was Sachin.

Turned out that Sunil and Sachin, too, had nothing to do. Four aimless teenagers, only one of whom could afford to be so, ambled to the build­ing’s gate. Sunil introduced us. We pretended to be cool. When he was looking away, we scrutinised him, downloading details and images into our heads.

Sachin had recently returned from England, where he had scored his first Test century. He had become a national fascination. Yet, on this weekday afternoon in Kalanagar, he could stand at a street corner in rela­tive peace. He was wearing a Reebok T-shirt, blue jeans and Reebok pump shoes, which were a rage those days. The Maruti was a new acquisition, his first car. When he parked it with the windows down, Sunil reminded him to roll them up. He pressed the key and laughed as the windows went up, making a droning sound. They were automatic.

His favourite song then was Mona by Craig McLachlan. He played it on the car stereo. Also, Step by Step.

Me: “It’s by ‘New Kids in the Block’, right?” Sachin (grinning): “New Kids on the Block.”
We went up to Sunil’s place. His mother, a truly fabulous cook, made pav bhaji. Now and then Sachin checked his hair in the mirror.

We played carom. If someone made a great connection, Sachin, kissing his own fingertips, would say, “Chumma shot”. When it was Sachin’s turn, he would tell himself, “Take your time, concentrate.”

Around five in the evening, he dropped us off at Bandra Station. He was a bit worried, because he did not have a driving licence. “The paandu (cop) will give me hell,” he said. Actually, he said something more interest­ing than ‘give me hell’.