Ibrahim Lakadawala speaks like a celluloid cult character. But the former basketball player is using the sport to stop youngsters of Nagpada from becoming criminals. 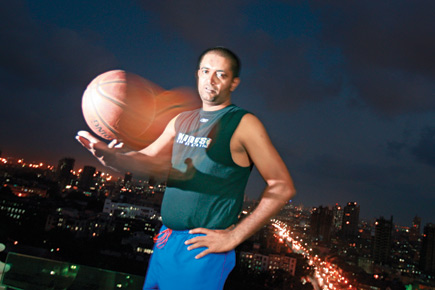 Ibrahim Lakadawala speaks like a celluloid cult character. But the former basketball player is using the sport to stop crime in Nagpada.


Symphony to basketball enthusiasts is the squeak of sneakers and the whooshing sound the ball makes as it drops cleanly through the ring ten feet above the ground. Recently, evenings in Mumbai’s Nagpada precinct once again resonated with this music.

This was made possible by the week-long, razzle-dazzle, Rs 14 lakh prize money All India Mastan Basketball Professional League held a few days ago. The tournament reunited basketball with one of its spiritual homes, Nagpada.

The Muslim community and its traditions characterise Nagpada. For a handshake, you clasp the other person’s palm, then touch your chest. Goats are everywhere, tethered to balconies or tottering along the road on thin long legs, like girls on their first high-heeled adventure. Sport means basketball almost as much as cricket. There are two courts adjacent one another—the NNH (Nagpada Neighbourhood House), and Mastan YMCA. As someone courtside said, “Even the goats here can dribble a ball.”

Hyperbolic team names popularised by American franchise sports have become common even in India, thanks to the Indian Premier League (IPL). The teams in the Mastan YMCA League also had such names. The Super Girls won the women’s title, Team Prince the men’s. Matches began at 5.30 in the evening on a pale yellow and brown court, separated only by narrow lanes from the mosque and buildings around. The crowdedness of the neighbourhood intensified its sights and sounds. By eight, the compact stands at the court were full and chatty. A boy confused by the scoreboard asked his uncle, “Iqbal chacha, which is the team with 29 points?” The uncle, impressed by a player’s ball distribution, shouted “Bahut achche!”  Nagpada spectators have no patience for ineptitude. They labelled an out of shape player ‘Agrawal Dairy.’ Another one, they felt, did not deserve to be on the court. So they demanded of the coach, “Isko bithaao, &*#%*!”

The audio played the IPL hooter and songs from new Hindi films. After a basket, the announcer would sometimes say “Phrrrrrr!”, mimicking the aforementioned sound of the ball sinking through the meshed ring. Players were paid a match fee. Man of the match awards ranged from mobile phones to mini-refrigerators. The players of the final took home LCD televisions. The MVPs (Most Valuable Players) of the tournament, Dinesh CV and Akanksha Singh, received laptop computers.

“That’s a lot by basketball standards,” says D Sekhar, a former player, coach and official who was the courtside compere during the event, often bantering with the crowd about the matches. “The aim of the tournament was to bring in monetary incentive. In that sense it was successful, though the standard of the game was not the highest. They were all good players but got no time to gel with each other.”

Ibrahim Lakadawala, 36, watched everything from the sidelines or a corner. His family’s building and construction firm, Lakadawala Developers, was the chief sponsor of the Mastan YMCA League. The lanky Lakadawala is a former national level player and vice president of the Maharashtra State Basketball Association. He is a Nagpada boy who speaks the local patois, which some may equate to bhai lingo. He is a flamboyant dresser and thinks you should be too. The T-shirts he distributed among journalists at the tournament press conference had coconut trees on them. Fringe sports in India are full of original characters, and Lakadawala is one of them. You immediately have a title for him—basketball’s Munnabhai.

He grins when you share it with him, exposing teeth stained by paan products. Asked if he minds the name, he says in Hindi, “Why should I? Basketball should grow, that’s all.”

Unlike Munnabhai, Lakadawala and his contemporaries are worried by the life of crime that some Nagpada youngsters choose (Dawood Ibrahim grew up in the nearby Yakub Lane). They want them to play instead. It might be a naïve hope but an honourable one.

“Area ki badnaami bahut hai, ladke out line mein chale jaate hain,” Lakadawala says. (The area has notoriety. Lads choose the crime line). “Sports is a wholesome activity. We found people who had left the area and were up to no good in places out of Mumbai. We told them to come back and play instead. Nagpada was renowned for basketball. We want to bring that glory back.”

The Mastan YMCA League was the third event Lakadawala and seven of his friends and contemporaries organised in the last couple of years. The seven associates are Salim Shaikh, Salim Tirandaz, Waseem Shaikh, Nasir Ansari, Rizwan Ansari, Asad Aziz and Ziker Koradia. Lakadawala enjoys a good relationship with the Basketball Federation of India (BFI). This is rare. National federations do not take kindly to those who take initiative. But for a cash-strapped body like the BFI, Lakadawala, who is not just a former player but has deep pockets, is a godsend. Lakadawala too, despite his Munna-type argot and clout, does not fancy himself as a revolutionary. “We are clear we want to work with the federation,” he says.

Harish Sharma, the BFI’s secretary-general, says, “The BFI supports Ibrahim because he is a clean-hearted young person devoted to the game. Not just that, he is willing to use his own financial resources for basketball.”

“Ibrahim is going to be a key person for basketball in Mumbai,” says Sekhar. “His love for the game is genuine. Even when he is not sponsoring a tournament, he will at least host a dinner for the players. The junior Nationals were held last year at Mastan YMCA. These were all boys under-16. Ibrahim ensured that they had everything, from toothpaste to bed linen.”

A Kobe Bryant fan whose large hat collection includes a yellow-and-purple LA Lakers number, Lakadawala got involved in basketball through the legendary battles between NNH and Mastan in the 80s. He reached the national level. “Khud ke mooh kya boloon? But people say I played well. I had a 15-year career. I played most of the leading tournaments, including the Nationals and the Federation Cup.”

He got a call for an India camp but could not go due to controversies in the state body, and because the camps would sometimes clash with Ramzan. Now, with his playing days past him, all he wants for the future generations of Indians is chances to get on court.

“The NBA has come to India and has teamed up with the Mahindra Group. On our part, we are doing some tournaments. They are getting a good turnout. The more opportunities to play, at whatever level, the merrier. If cricketers become millionaires, basketball players should at least earn a decent living.”