The old guard has the record but not the time to stage a comeback; the skipper’s case is different 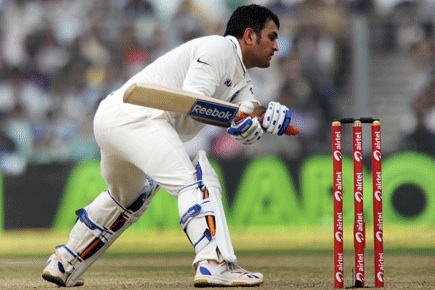 The old guard has the record but not the time to stage a comeback; the skipper’s case is different


The old guard has the record but not the time to stage a comeback; the skipper’s case is different

The clamour for an overhaul of the Indian middle order is rising. But like life, cricket offers many chances. No other sport boasts of so many ‘comeback’ legends. Perhaps it is natural for a game even the shortest version of which plays out longer than any other team sport does. So the greatness of a cricketer is determined as much by talent as by one’s ability to reinvent oneself, time and again, as a top performer.

Honestly, there is nothing unusual about the present predicament of the Indian batsmen except that they have slumped together and it looks embarrassing. But each of them has suffered similar ebbs in his career and come back a better player.

Let’s not dig into a certain Sachin Tendulkar’s records. Not his game, but his mind looks crammed. Also, nobody else knows how it feels approaching a hundredth hundred.

But Sachin’s illustrious colleagues have shown in the past that they have it in them to pick themselves up and return stronger. Unfortunately, the process takes not only a rare degree of ability but also time. Gambhir and Sehwag have enough years of cricket ahead and can be trusted to make strong comebacks. But Laxman and Dravid do not have the luxury. When they have returned winners from similar situations in the past, it took them a season or two. Given opportunities, they may regain form by 2013, but their bodies will not hold.

If Dravid and Laxman have all the records but not the time to convince the selectors, Indian captain Mahendra Singh Dhoni’s case is quite the opposite. Playing abroad, particularly outside Asia, Dhoni’s Test batting record has always been ordinary.

Playing away against Bangladesh, New Zealand and Pakistan, Dhoni averages 96.50, 77.50 and 59.66, respectively. Against opponents such as Sri Lanka, South Africa and England, his away averages are 32, 31.44 and 39, respectively. In 26 away innings against these three teams, Dhoni scored six half-centuries, three ducks and did not cross 20 on nine occasions.

Against West Indies and Australia, Dhoni’s away averages are 22.08 and 18.69. In 26 away innings against these two opponents, he scored three half-centuries, two ducks and did not cross 20 on 17 occasions. Overall, playing away in West Indies, Australia, England, South Africa and Sri Lanka, Dhoni failed to cross 20 in 31 (60 per cent) out of 52 innings.

More recently, Dhoni averaged 31 in England, thanks to two valiant 50s in Birmingham. Together, the other six innings yielded just 69. In the previous away series against West Indies, just one 50-plus score propelled his average to 19. In the remaining four innings, he managed a total of 23. In the current tour, he has so far averaged 20 in six innings. But for the lone half-century at Sydney, he has scored 45 runs in five innings.

Dhoni’s wicket keeping, usually flawless and unnoticed, has also started slipping under pressure. Comparisons with Adam Gilchrist, Alec Stewart or the still-in-action Mark Boucher may not be fair but even Kamran Akmal or Brad Haddin has a better dismissals-per-inning record in Tests than the Indian captain (not to mention former butter fingers Matt Prior who shares Dhoni’s strike rate behind the stumps).

Surely, if Dhoni was not such a phenomenally successful ODI captain and India were not averse to the multiple-captain theory, his place in the Test squad would long have been suspect. Forget the younger lot in domestic cricket, even Parthiv Patel has returned a better keeper and has batting averages playing away of 32 and 65.50, respectively, against Australia and Pakistan. Only last year, playing ODIs away against West Indies and England, Patel averaged 29.40 and 34.40, respectively.

Most followers of the game do not enjoy commentator Sourav Ganguly’s psychic gifts and it is hard to guess if Dhoni really does not enjoy playing Test cricket. It is equally impossible to determine if the Indian captain was thinking aloud about retiring from Test cricket only to deflect the media’s unrelenting glare on his team’s dismal performance or if there was some genuine soul-searching.

But if Laxman and Dravid have run out of time to rediscover their lost touch that made them such formidable performers abroad, Dhoni has never demonstrated the skill that makes a Test batsman dependable on hostile foreign pitches. India does not need to look hard to figure out what is amiss. Playing on familiar tracks against weaker teams, Dhoni himself has shown what an effective number seven can lend to a team’s batting stability.

Perhaps it’s time to try someone for the Test squad who is less of a gamble at the crease, whose consistency is less challenged by quality bowling in tough conditions. That should be by far the most obvious task before the selectors, and much easier than finding necessary replacements for Laxman and Dravid.