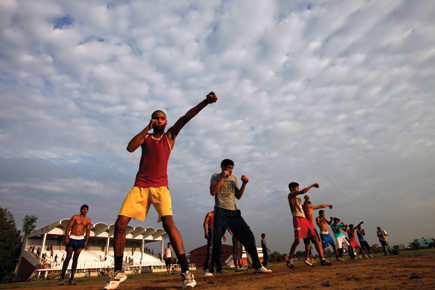 
There were no sports journalists to see them off on their way to Azerbaijan. Nor was there a single OB van present to cover the send-off. And when our boxers in Baku set about knocking their better-fancied opponents out of the reckoning on their way to Olympic qualification, there were no ‘breaking news’ headlines on Indian news channels, which were more intent on reporting ho-hum outcomes of the T20 Champions League.

India’s boxing revolution so far, we must acknowledge, has mostly been a silent one. With as many as four Indian boxers already qualifying for the London Olympics next year, and with many others waiting for their opportunity in the next round of qualifiers, it wouldn’t be a far cry to expect more than the single medal won for boxing at Beijing by Vijender Singh. Only Russia and Ukraine secured more Olympic slots at Baku (five each), while the traditional boxing powerhouse Cuba equalled India’s performance, with four boxers qualifying for the 2012 games at the world boxing championships.

As of now, India has a real chance of qualifying in all 10 weight categories at the 2012 games, a first in the history of Indian boxing. With our women led by Mary Kom also looking potent, India’s might be a rare contingent with more than 10 boxers raring to hop into the ring there.

Gradually but surely, boxing is becoming India’s top Olympic sport. The big breakthrough happened last November-December at the Guangzhou Asian Games. With India stuck with just one gold medal—won by the much-ballyhooed shooting squad—to show at the end of the first week of competition, the national ritual of celebrating failure was about to start. CWG 2010,  murmurs arose, had been a false dawn. It was under conditions of such morbid gloom that India’s boxers sprang to glory. They stunned everyone, winning seven medals, including two golds and three silvers, their best ever Asiad performance, catapulting India to sixth spot on the overall medals chart.

That moment did not happen by chance. There was no stroke of luck involved. The Asiad medallists and those who have now qualified for the Olympics are part of a phalanx of well-trained Indian boxers who have emerged over the past decade from Bhiwani in Haryana (and even strife-ridden parts of the Northeast). Most of the credit for this is due to the Bhiwani Boxing Club, whose coach Jagdish Singh is fond of saying, “Geedar ka shikaar karna ho, toh sher se ladna seekho (If you want to hunt jackals, learn how to fight a lion).”

The coach has been saying it for many years, but became a national hero only once boxing stormed into the limelight. The momentous occasion was Beijing 2008, which saw a vast TV audience cheering with joyous abandon for the achievements of Vijender Singh and Akhil Kumar, Bhiwani boxers both (and Jagdish Singh’s trainees).

Surprisingly, despite Bhiwani’s multiple Asiad gold medallists and slew of winners in other international boxing competitions, the rest of India hadn’t taken much note of it earlier. A few startling days at the Olympics transformed the town’s profile across the land. As Akhil Kumar punched his way past Sergey Vodopyanov after four gruelling rounds in the 54 kg pre-quarterfinal, and Vijender Singh more or less held his own against Emilio Correa in the semifinals of the 75 kg category, mediapersons swarmed into Bhiwani. Apathy soon gave way to the glare of nonstop TV attention, and Bhiwani, from being a shantytown, turned overnight into the cynosure of more than a few million medal-dazzled eyes.

The cheers were audible for days and days. To the media, the fact that India’s entire boxing team had emerged from the small town of Bhiwani offered too irresistible a story of human triumph against all odds. The hype was such that a slew of local politicians turned up there to grab photo opportunities with the town’s inhabitants basking in the glow of their boxers’ success.

Bhiwani is no stranger to international wins. Home to at least 1,500 regular boxers and 20,000 active sportspersons today, the town thrives on local sportsmen making it to the sports quotas of the paramilitary forces, police and Indian Army, and has produced as many as 14 Arjuna awardees—recipients of the country’s top honour for sportspersons.

The town’s rise to sports eminence can be traced back several decades. Bhiwani and Indian boxing had their first tryst with international success way back in the 1960s, when Hawa Singh won gold at the 1966 Asian Games. He followed it up with another gold medal at the Bangkok Asian Games in 1970, and this gave rise to a boxing culture that has since flourished in this town. No funding was directed towards it. But that didn’t dampen the gung-ho spirit of Bhiwani’s boxers; if Hawa Singh could do it, they told themselves, so could they.

The mid-70s and 80s were trying times for the town, with several of its youth leaving for neighbouring states in search of work and livelihood. Local discontentment over the Government’s apathy peaked during the late 80s, with unemployment leading to high levels of frustration. Sports offered hope—and, given half a chance, locals were ready to adopt competitive games with gusto.

In the early 1990s, the Sports Authority of India (SAI) started a training school for boxing at Bhiwani, its first organised sports facility, to encourage the sport. The SAI was prompted by the success of Raj Kumar Sangwan, who won golds at two Asian-level meets (at Bangkok in 1991 and Tehran in 1994). However, this solitary SAI facility offered little by way of training infrastructure.

It was the Bhiwani Boxing Club, hardly a modern facility itself, that ultimately made the difference. The club, in much better shape today, was once described in The Indian Express thus: ‘Tucked in a corner, almost hidden by fields, the yellow brick building is more a farm outhouse than a possible breeding centre for international sportspersons… The Bhiwani Boxing Club is just that, two rooms and a shed.’

Lack of infrastructure, however, can be more than compensated for by a passion for boxing, backed by discipline and dedication. Many of Bhiwani’s boxers came from remote and long-neglected parts of India, where training facilities and coaching either do not exist or are not worth their name; India’s sports administrators paid them no attention, but Jagdish Singh certainly did. Akhil Kumar and Vijender Singh just happen to be his two most famous trainees.

The story of sports in the Northeast is no different. As a desperate measure to shield youngsters from future unemployment and calls for insurgency, parents in this troubled region have been encouraging their wards to embrace sports for many years now. Nineteen-year-old Devendro Singh Laishram, a revelation at Baku, is one such teenager. If he scores bigger successes, it could boost boxing all across the region, from Manipur and Nagaland to Mizoram and Sikkim and beyond. These are states beset with problems of unemployment and economic stagnation, and enthusiasm for sports could hold out opportunities that earlier generations had not even dreamt of.

The Bhiwani Boxing Club is eager to welcome them. In Jagdish Singh’s words, “Parents are keen to bring them here, knowing this is a future they can dream of. They plead with me to enrol their children. It’s something they didn’t get a chance to do, and they hope their children will stand up to the test and become known all over the country. Plus, now that they’ve seen the success stories, it’s a reality they want to believe in.”

For now, however, all eyes will be on Devendro Singh Laishram (49 kg category), Jai Bhagwan (60 kg), Manoj Kumar (64 kg) and Vikas Krishan (69 kg), as they prepare for their bouts in the ring at London 2012. If more Indian boxers make the Olympic cut—there are hopefuls in other weight categories as well—at the next continental qualifiers

in March, excitement levels at home could reach unseen levels. And if they win more than a medal or two next summer, it could set the stage for a complete overhaul of boxing facilities in India, perhaps with a few corporate sponsors chipping in with funds. That is when India’s boxing revolution would be well and truly underway.