Will India’s current coach end up like Chappell—just another bad memory? 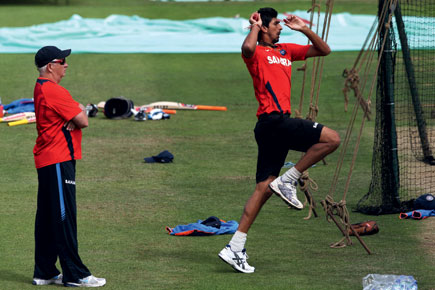 Will India’s current coach end up like Chappell—just another bad memory?


SYDNEY ~ It was turning out to be yet another of those Dhoni press meets at the end of a disastrous loss, with the Indian captain saying things like, “The solution is simple, you have to score more runs and take more wickets than the opposition to win a Test match.” No kidding.

Just as I was starting to feel exasperated with MS Dhoni’s searing insights, a colleague asked the following question: “Skipper, while we are continuously talking about what the players need to do to stem the tide, what about the contribution of Duncan Fletcher as coach? What has he done, for we only see him standing with hands on hips at the nets?”

For a second, Dhoni seemed perturbed. But now a seasoned diplomat with six straight overseas losses behind him, he ducked that bouncer well. With a hint of a smile, here’s what Dhoni had to say: “You can’t just blame one individual. It is a collective failure and one individual doesn’t make a difference. I am sure the coach is trying.”

On the face of it, this is a simple enough answer in defence of the team’s head coach. Delve deeper, it doesn’t say a thing about what the coach is doing, what his contribution is to the team cause except being a technically sound cricket brain with decades of experience. The question becomes more pertinent if you ask the players about Duncan’s predecessor Gary Kirsten. Gary Kirsten won India the World Cup and successfully catapulted the team to the number one spot in the world Test rankings. Since his departure in April 2011, Indian cricket has witnessed a steady decline, and if Sydney was anything to go by, there might just be some more humiliation left to come in the next couple of weeks.

All the players I have spoken to have nothing but praise for Kirsten. Speaking on condition of anonymity, which is understandable as Fletcher is the current boss, here’s what a player had to say: “Gary is by far the best coach we have had. He was far more involved and was exceptional in the practice sessions. We just loved working with Gary.” When probed about Duncan Fletcher, he turns suddenly more cautious, “He is a good coach”, and that’s the end of the conversation.

Having observed Indian cricket very closely over the last five years and having covered most games under Kirsten and Fletcher, here’s a list of some of the fundamental differences between the two: Kirsten was far more involved in net sessions and used to help players with throw downs for hours. Sachin Tendulkar was the biggest beneficiary. I have seen Gary throw hundreds of balls at Sachin at the nets and have never seen him tire. Gary was always hands-on. Fletcher on the other hand is a hands-off coach. With hands on hips at the nets, he is more of a supervisor than an active participant. At 63 years of age, this is hardly surprising. To his credit, Kirsten helped think out of the box, and hence the presence of adventurer Mike Horne in the Indian dressing room ahead of the World Cup. Horne’s life stories played an important part in inspiring the team before crucial encounters like Australia and Pakistan, and did much to take the pressure off the players. There is little evidence to suggest Fletcher thinks beyond the conventional. He is one who looks for formulas, and formulas, as noted Australian cricket writer Gideon Haigh suggests, ‘don’t win Test matches’.

Most importantly, Kirsten was intent on working his way through failure, and for him winning was the only solution. “You have a happy dressing room only when you are winning,” I have heard him say on many an occasion. On the other hand, the winning strokes that Fletcher appears to be looking for are those of luck, which has so far eluded him in his 10 months as coach of India. Here’s Fletcher for you at the end of the second day of the Sydney Test, “You need some good fortune in a Test match, and if luck goes our way, we can surely make a comeback in the match.”

Luck did not, and Australia ended up scoring 369 runs for the loss of one wicket on Day 3. His answer was in response to the following question: “So far, it seems Micky Arthur has out-thought you in this series. And the batting collapse is becoming almost predictable since it first started in England.  Can you please explain the reasons behind another abject surrender?” The packed media conference room was rather bemused to hear India’s coach say, “We need some good fortune” to turn things around. On being grilled further about differences between him and Gary Kirsten, the normally poker-faced Fletcher seemed to lose a little of his composure. “Gary and I are good friends and I had spoken to Gary before taking the job. I can tell you not much have changed since I have taken over as coach.”

Unfortunately, we aren’t convinced. For us fans, things have changed drastically. We have now lost six straight games overseas and don’t even seem in any position to compete with quality sides like England or Australia. Our reserve bench has a deserted look, and fans are collectively losing faith in one of the country’s two big national passions. And when this happens just months after winning a World Cup, there’s little doubt that something is fundamentally wrong with Indian cricket.

To Fletcher’s credit, every person I have spoken to has suggested that he knows the game inside out and is very sound technically. But Indian cricket needs much more than a technically sound person. First and foremost, you need to come to terms with the culture of Indian cricket. “This was my most important challenge as coach of India,” Kirsten had said to me after winning the World Cup. “I wouldn’t say much in the first couple of months. Just observed the way things were done. Things were different and it was important I understood the differences.” Paddy Upton, a close associate of Kirsten and India’s mental conditioning coach during the World Cup, put it nicely, “Gary did get frustrated on occasions. He is one who wants instant results. He hates to lose and that was his single most important driver.”

Whether or not Fletcher hates to lose is still unclear to us. At no point in his 10 months at the helm have we seen him frustrated or depressed. At no point has Fletcher lost his cool, despite losing the plot completely in England and Australia. At no point has he offered us a window into his thought process. Maybe this is his formula, but so far, it hasn’t helped Indian cricket one bit.

Following India’s tame surrender at Sydney, I had changed my BBM profile message to: ‘Is Fletcher going the Chappell way?’ Within minutes, I got a message from an Indian cricketer that said, ‘You are right in saying so.’ I was startled and amused at the same time. My pushing further yielded no more, but that one statement was enough to give me an insight into the thinking inside the Indian camp. India under Gary and India under Fletcher are two very different propositions, and unlike the former, the latter hasn’t done much yet to earn the respect of his players.

Funnily for most of us in the media, we hardly know Duncan Fletcher. Here’s Harsha Bhogle on the man. “I hardly know him. In fact, I don’t remember having a conversation with him ever. In England I had a rather strange encounter with him. I was sitting as Duncan was walking past. Seeing him I was about to get up to say ‘hi’, but he had already walked past me.” While the coach has every right to remain aloof in his overall demeanour, perhaps a less standoffish Fletcher would pick up the vibes around him and realise that he is fast running out of time. Inconsequential wins against the West Indies notwithstanding, his performance index is a huge negative so far, a statistic he will do well to rectify in the next few months. This is yet another standout feature of our cricket culture. We are an impatient lot, need results, and need them quickly. Frankly, we aren’t prepared to wait for fortune to turn our way, and want the boss of the team to get cracking on a plan to reverse the sorry record. If it doesn’t happen fairly quickly, it might soon be time to look beyond Mr Fletcher.

The timing and context of this piece is a rather strange coincidence. With Indian cricket facing a serious crisis Down Under, the last time round—after Monkeygate—we were desperately in search of some inspiration before the third Test at Perth. Among other things, it came in the form of Gary Kirsten, who first entered the Indian dressing room ahead of the Perth Test in 2008. As I write this piece on the eve of the Perth Test in 2012, again the third of the series, we need a charged Duncan Fletcher to enter the Indian dressing room at the WACA. We need him to inspire the boys and lead the team out of this crisis of confidence that seems to have taken hold. We need him to zero in on his elusive winning formula as soon as possible, and make the hallowed fortress of the WACA his own. We need him to go back seven years and recreate his Ashes winning magic. Australia coach Micky Arthur feels Fletcher is well capable. “He is a tremendous coach and I am sure he will be plotting to come back hard at us at Perth. The defeats must be hurting, and we are prepared for a backlash from Duncan.”

Indian cricket desperately needs this backlash, if that is what it turns out to be. Otherwise, Fletcher might indeed end up going the Chappell way.