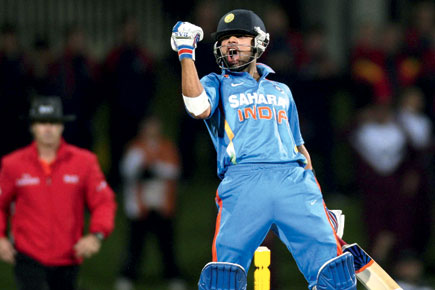 
The nine-year-old boy is shy. By and large he stays behind his father. Then we take the name of the cricketer and ask for directions to his new four-storey home. The nine-year-old emerges from behind dad’s legs and smiles. Near the house, a few feet away from the towering maroon iron gate, two schoolgirls giggle. Neighbours notice our camera, come down and boast of their proximity to the cricketer. These days, the wide and meandering bylanes of LIC Colony in Delhi’s Paschim Vihar wear a look of pride. The area is home to India’s new vice-captain and star, Virat Kohli, though he has barely lived here since his family recently moved from more modest quarters in nearby Uttam Nagar.

As we meet a bunch of people connected to Virat in some way or another, we sense in them euphoria mixed with caution. Neighbours, fans and the press celebrate his success, also partly because they need something to celebrate after the disastrous Australian tour. But those who know him better, like family and friends, are aware that Virat is temperamental and has often been in controversies on and off the field. They are quick to remind you that he is still only a 23-year-old.

Virat strayed into cricket at the age of nine. His father Prem Kohli decided to enrol him and elder brother Vikas at the West Delhi Academy in the neighbourhood so the two wouldn’t just while away their summer holidays. “He was a chubby, naughty kid when he came to us,” remembers Rajkumar Sharma, his coach at the academy. ‘Raju Sir’, as Sharma is called by his wards, is still Virat’s mentor and is often the first person he calls after a match. “He called me straight after the knock at Hobart (against Sri Lanka). It was I who informed him that he had been made vice-captain (of the One-Day team for the Asia Cup in Bangladesh).” Sharma waits for his call after every innings, good or bad. “If he doesn’t call within the next five minutes, I know he’s  been declared Man of the Match and is busy with the presentation ceremony.

As Sharma speaks, he pulls out a passport-size photograph of a young Virat, taken when he had joined the academy. “He was a bright kid even then, quick and smart. He’s a perfect combination of talent and grit.” When in town, Kohli still practices at the academy.

Young, yes. Talented, yes. But isn’t he too young to be the vice-captain? Sharma does not think so. “He already has nine centuries to his credit. The century against Sri Lanka is a sign of his ability and maturity. Besides, he’s been captain of the under-19 team and has led Royal Challengers Bangalore in IPL games several times.”

However, Virat’s conduct has not always been captain-like. His celebrations have on occasion been over the top. And then there was the ‘Fingergate’ controversy in Australia. “He is only 23. What do you expect?” Sharma says. He admits Virat has a tendency to get carried away and be overconfident. But like all of us, Virat is a man of contradictions. One moment he’s a metrosexual with a grooming kit loaded with creams and lotions, the other he’s a Delhi alpha male refusing to blink in the toughest of cricketing battlefields. One moment he’s flipping the bird to crowds in Australia, the other he cremates his father and a few hours later leads his team to victory over Karnataka in the Ranji Trophy. About the last instance, Sharma says, “He played a calm innings, ensured his team won and called me after the match. He was crying. He said he wasn’t out and got a wrong decision. I didn’t know what to say. That’s his dedication to the game.”

Parties, roisterous celebration after a great innings, showing off newly bought jackets on Twitter are not, come to think of it, so odd in a young lad. But “now that he has more responsibility on his shoulders, he will grow up and become calmer, because he is dedicated to his game, there is no doubt about that,” says Sharma.

Vikas Kohli, 30, offers more insight into Virat’s nature: “He had a tough time after our father passed away. Our father was a pillar of strength and he particularly encouraged Virat to continue playing.” Vikas, now a businessman (“manufacturing” is all he says when we ask him about his business) dropped out of Sharma’s academy two years after he joined it with his brother. “He has found his feet in the game now. He is getting more focused and is calmer. I think the new responsibilities will make him a more mature professional.” Vikas says Virat’s partying has already gone down. “Earlier, he used to take off any time. Now whatever time he gets, he likes to stay home playing with my son. Our mother cooks for us, elder sister Bhavna drops in with her family and we don’t talk about cricket at all.” Vikas says the family is looking forward to spending time with Virat before he rejoins the team for the Asia Cup.

Neeraj Bansal, a member of Haryana’s Ranji Trophy side and a close friend of Virat’s, says he’s been a “tashanwala banda” since school. “We used to love cranking up the car stereo and drive to Murthal at night for parantha meals. Virat loves Punjabi music.”

“He’s always been temperamental and emotional, but he is also dedicated to the game. We saw it when he lost his father, when he couldn’t make it to the under-14 team and cried like a baby, and now in Australia. It was all so Virat,” says Bansal, who doesn’t mind being known as Virat’s friend. “I feel proud when people call me to get a picture with Virat. He’s my friend,” he grins.

Virat’s mates at the academy and coach Sharma are planning a party for him after the Asia Cup. “When we spoke the other day, he said he just wanted to sleep before leaving for the Asia Cup and skip practice. He’ll still have to come, that’s the discipline of the game, but we’ll save the proper welcome for when he’s back from the Asia Cup,” says Sharma. A tashanwala welcome, he means.