India has now won the U-19 World Cup title three times—in 2000 under Mohammed Kaif, and in 2008 under Virat Kohli 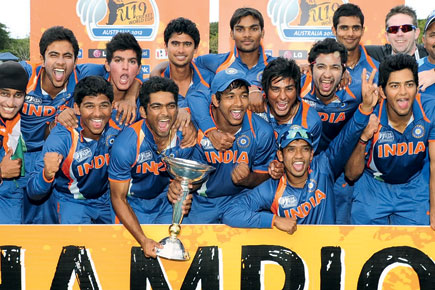 India has now won the U-19 World Cup title three times—in 2000 under Mohammed Kaif, and in 2008 under Virat Kohli


The latest U-19 World Cup victory has made India, along with Australia, the most successful U-19 team in the tournament’s history. India has now won the title three times—in 2000 under Mohammed Kaif, and in 2008 under Virat Kohli.

In this year’s campaign, in Australia, India scored 15 centuries overall, the most in a U-19 World Cup tournament. The team, however, did not start off smoothly. They lost the first game against West Indies and it wasn’t until the semi-final that their batting began to click collectively. In the final, the bowlers, after reducing Australia to 38 for 4, had a rare off day. India was set a target of 226. Accomplishing this target would mean registering the highest successful chase of the tournament.

It turned out to be a tense game, with India losing its first batsman in just the second over. Despite decent partnerships, the team continued to lose wickets. But captain Unmukt Chand, who opened the batting, along with number six batsman Smit Patel, forged an unbroken 130 run partnership, to hit the winning runs at the end of the 47th over.

Among the standout Indian performers this time were Chand and left arm spinner Harmeet Singh. Chand scored an unbeaten 111 in a challenging chase during the final, making this his third consecutive century in a final for India. Under him, the team has won two quadrangular titles and a shared Asia Cup trophy. Singh, who bowls with a classical left arm action, is already being compared with spin legend Bishan Singh Bedi. With an economy rate of only 3.02, his proved to be one of the key performances.