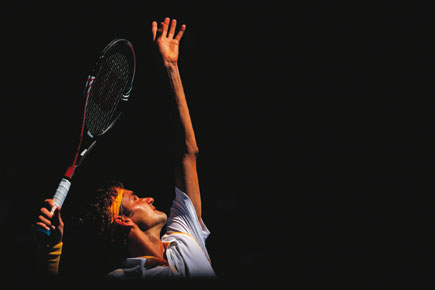 
Roger Federer was not red-faced when he met the press after his thumping loss to Novak Djokovic in the Australian Open semifinal. He was just red-shirted. It was a tomato red T-shirt bearing a white ‘RF’ logo.

A journalist asked him whether the torch had passed, since both Federer and Rafael Nadal had lost before the final.

Federer replied, “They say that very quickly, you know. So, let’s talk after six months.” The icy tone contrasted sharply with the bright colour of his garb.

Geniality often deserts the Swiss genius after a defeat. Some of his answers to journalists are curt, even if the questions are valid. Questions that insinuate an end of his voyage tick him off even more.

Perhaps his feelings are justified. After all, Federer has rebounded from a career slump before. After the loss to Nadal in the classic 2008 Wimbledon final, it seemed unlikely he would win more than a couple of majors. He won five. He had 11 Grand Slams at the time. Pete Sampras’ record of 14 looked out of reach. Now he has 16.

But Federer turns 30 this August. Secondly, even rivals other than Nadal, like Australian Open champ Djokovic, are gaining in confidence. Federer will still be a contender for a while, but it does seem that the Slams will get increasingly tougher to win. In other words, while it is not yet time to write an obituary to his career, some sort of reflection on it won’t be inappropriate.

The genius of Federer has been acknowledged enough, in different ways, by a wide spectrum of observers. David Foster Wallace, regular sports reporters, Sachin Tendulkar and makers of Rolex commercials have all appreciated the liquid grace of his shot-making and court coverage. It is the most obvious, delightful feature of his game. His statistical milestones have also been marvelled at. He is the Jack Nicklaus of tennis. Nobody has won as many majors.
What is not discussed often enough is Federer’s fighting qualities. Some critics doubt he has any. They categorise him as a dandy with extraordinary skill and staying power, but not as much fire. A David Gower, though more successful, but not a Miandad. This is not entirely accurate. Some of Federer’s memorable moments on court have been a result of his fighting qualities. What also bears examination is Federer’s occasional descent into play that is riddled with embarrassing errors, as was the case in his loss against an inspired Djokovic.

Let’s first look at Federer the battler and the performances that reveal him as one. In the 2006 and 2007 Wimbledon finals, Federer withstood a fierce challenge from Nadal. These are wins for which he does not get due credit. Don’t be swayed by the argument that Nadal’s game was still improving then. This is only partially true. Even then, Nadal’s game was formidable. Even then, he was a mental challenge for Federer. The matches were not easy. Federer had to deliver amidst the weight of expectation and an opponent with the heart and legs of a warrior.

A year later at Wimbledon, Federer again displayed his toughness. Nadal was the deserving winner of a match rated the best ever in the game’s history. But Federer hung in till the end, and in style. He was serving aces and teeing off forehand winners till the monumental battle concluded at 9.15 pm, London time, in a semi-dark Centre Court.

At the 2009 French Open, under great pressure to finish on the podium after Nadal’s shock exit, Federer showed steely nerves against Tommy Haas and Juan Martin del Potro. Both were bare-knuckle clashes where Federer, nonetheless, went for his shots. One point against Haas would rank among the bravest in recent history. Federer was down two sets to love. In the third, he was down 3-4, 30-40. One point to Haas and he would be serving for the match at 5-3. Federer’s French Open dream would most certainly be over. So Federer kicks in a serve to the Haas backhand. Haas topspins a deep return. Federer steps around his backhand and pounds an inside-out forehand that nicks the line. Deuce. Federer holds. He wins the set. He wins the next two sets and the match.

In the semifinals, Federer was down two sets to one against the hard-hitting Juan Martin del Potro. But Federer matched heat with heat and mixed it up with drop shots. Gradually, the match began to turn his way.

A month later, Federer found himself in another test of will, this time in the Wimbledon final against Andy Roddick. Roddick was the better player in the first half of the match. But Federer’s serve betrayed no tension. Though the rest of his game fluctuated, his serve held firm. He served 50 aces to prevail in five sets.

Lastly, at the 2010 ATP Championships final in London, Federer showed courage to play big shots time and again against Nadal. It enabled him to score a win over his chief rival in the latter’s best year, and thus salvage his reputation.

Now let us try to understand the mystery of Federer the spectacular struggler, who suffers timing malfunctions and confidence crises. He cannot serve out a set, as happened when he was 5-3 up in the second set against Djokovic. His first-serve percentage for the set drops into the 40s. Worse, he shanks the ball, resulting in errors unworthy of his stature as the game’s most majestic, if not best, player. Some tennis forums call Federer the greatest shanker, bar Ravi. (Shanking happens when the ball comes off the racquet frame instead of the strings.)

Such occasions take me back several years to an evening at a Peddar Road flat in Mumbai.

It was a party hosted by a poet-writer who was the editor of a publication I worked with. The gathering was small and varied. I recall a Dutchman and an attractive girl in a sari, among others. The menu was pizza and salad. Late in the evening, an art film actress renowned for her patrician beauty arrived.
She was not young, but still an emblem of class. Mentioning her in discussions on Indian actresses meant you had high taste. And she was beautiful.
At the party, though, we discovered that she could drink. Soon, she was drunk enough for food to dribble out of her mouth. I remember her picking up a cauliflower floret with her hands and putting it back on her tongue.

To watch an elegant woman’s descent into this state was distressing. The feeling is similar when Federer’s game crumbles, as it did in Melbourne.
The relentless pressure from Djokovic got to him. He became tentative and played percentage tennis from the baseline. Federer hired Paul Annacone as his coach last year, ostensibly to help him play an attacking game. But his approach against Djokovic defeated the purpose of the move. When his anxiety grew, mis-hits and bloopers dribbled off the racquet, like dinner from the actress’ mouth.

There are a few theories why Federer shanks. A majority of his shanks are on his backhand, his weaker wing. Federer hits a singlehanded backhand. And nine out of ten such players have their forehand as the stronger shot, Richard Gasquet being an exception. When the backhand is under sustained assault, as Federer’s was against Djokovic, it wilts, sometimes causing a shank.

The other reason is anxiety. Anxiety tightens the arm, which throws timing off. Some also blame Federer’s mid-size racquet. It has a head of 90 sq inches. Most other players, including Nadal, use a larger racquet, with a head size of 100 sq inches. It allows them a greater margin of error than Federer’s.
Annacone was the coach of Pete Sampras, the greatest exponent of the serve-and-volley game and, if not for his French Open failures, the greatest player ever. When Sampras ruled, he was the unquestioned boss. Federer is approaching 30. Nadal is almost five years younger, Djokovic six. Federer knows the only way he can beat them is through attack. He played like that at the ATP Championships in London and scored a meaningful win over Nadal. He did not play like that against Djokovic in Melbourne. Federer’s supporters do not expect him to win every time. He has won enough. They only want him to remember, at all times, why he got Annacone.