The most domineering strongman of the day badly needed a mood booster. The Russian president has one in the FIFA World Cup 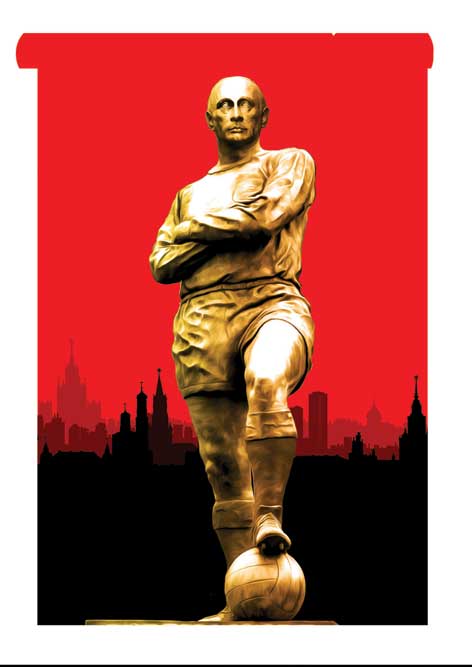 The map was torn apart by history. Russia is on the mind, again. In another time, when Russia ruled the imagination, it hurtled across the pages as Gogol’s troika, a violent leap into the future. Then, a few breathless passages later, it was a conflicted soul, as portrayed by Dostoevsky. Russia was the name of an emotion, the depth of which only novelists could fathom even as emperors and revolutionaries added to its legacy of hurt.

The past still drives the passions and pathologies of its new emperor. Vladimir Putin returns to the great yesterday to retrieve fresh armour for the cult of the

eternal leader. When he seeks the legitimacy of a sham democracy as a nationalist shaped by the secret service, it is the past that guides him, for an autocrat needs the exaggerated memories of greatness to package his present transgressions as a gift to the people.

When I read the new book by Timothy Snyder, a historian with the craft of a novelist who further convinces us that some of the finest storytellers at work today are to be found in non-fiction, I realise that even the neo-tsarist has a mind controller. In The Road to Unfreedom (Tim Duggan Books), Snyder writes that the apostle of Christian fascism, Ivan Ilyin, holds a semaphore for the wounded nationalist in these dark times.

Born in Russia, died in exile, and reburied in his liberated homeland by his posthumous protege, Ilyin abhorred a political system sustained by individual choices. ‘The principle of democracy is the irresponsible human atom,’ he wrote. So what Russia needed was not a leader born out of the arithmetic of elections, but a redeemer brought to the top by God’s will, the one who would ensure the ‘spiritual attainments’ of the nation.’ Writes Snyder, ‘The Russian nation, summoned to instant war against spiritual threats, was a creature rendered divine by its submission to an arbitrary leader who emerged from fiction. The redeemer would take upon himself the burden of dissolving all facts and passions, thereby rendering senseless any aspiration of any individual Russian to see or feel or change the world.’

The redeemer of the fascist imagination, in practice, would become the robber oligarch. Ilyin gave a divine aura to the spiritual fascist who cared more about the illegitimate wealth of the few than about the rule of law. ‘In the 2010s,’ Snyder writes, ‘Ilyin’s ideas served post-Soviet billionaires, and post-Soviet billionaires served them. Putin and his friends and allies accumulated vast wealth beyond the law, and then remade the state to preserve their own gains. Having achieved this, Russian leaders had to define politics as being rather than doing. An ideology such as Ilyin’s purports to explain why certain men have wealth and power in terms other than greed and ambition. What robber would not prefer to be called a redeemer?’

In his culture war with the West, Putin has the biggest troupe at his disposal to play for the world—and to heal his wounded ego. He badly needed a mood booster

The redeemer-dictator is a child of what Snyder calls the politics of eternity in which facts can’t change the ‘story of progress’. Its opposite is the politics of inevitability in which ‘the specifics of the past are irrelevant’. Eternity politicians such as Putin are mythmakers who travel in time to manufacture a narrative of seduction and domination. They need theatre. They need the drama of a crisis—Ukraine or Syria. They need the spectacular, its glorious display of nationalist masculinity. The frisson it generates is more rewarding than the dramatic tension of a nerve- agent attack on a renegade spy and his daughter in the cathedral town of Salisbury in England.

As the host of the FIFA World Cup, Putin has scored the redeemer’s goal even before the official kick-off. The Cup—is there anything more spectacular?—comes to Russia at time when he, in his bestselling autobiographical sketch in the domestic market, is the scarred nationalist, alone, his pride intact, pitted against the West, still steeped in a false sense of superiority. Sanctions may squeeze his economy to some extent, but the aura of suffering for the sake of the greater nation only strengthens the mythology of the eternal saviour. An autocrat at home, he is also accused of being the remote controller of Western democracy, and in the unwritten post-Cold War thriller, a super computer in the Kremlin could be the secret manipulator of freedom, the secret brain behind global domination. Putin badly needed a mood booster.

As Hitler needed one in 1936. In the Summer Olympics held in Berlin, the Führer wanted to tell a story larger than what Jesse Owens gifted to America. In the first televised Olympics, the spectacular kitsch filmed by Leni Reifenstahl, Aryan supremacy was at play—Germany beat America in the final medal tally—for global consumption. More than 80 years later, Putin— who is not Hitler and whose political ancestry stretches back to the defeat of Nazi Germany— needs a global blockbuster. In his culture war with the West, the most domineering strongman of the day has the biggest troupe at his disposal to play for the world—and to heal his wounded ego.

Maybe I like El Diego because he is the last great unimagined character of Latin American fiction. He waits for his Borges

Still, as Snyder writes, ‘the politics of eternity cannot make Putin or any other man immortal. But it can make other ideas unthinkable. And that is what eternity means: the same thing over and over again, a tedium exciting to believers because of the illusion that it is particularly theirs.’ In Russia today, the redeemer-dictator’s struggle for eternity has a spectacular backdrop.

I WON’T GO ANYWHERE near them as they debate who’s the GOAT (the Greatest of All Time), Maradona or Pele? Or Messi? That should be an aficionado’s privilege, and I watch the game only when the ‘fever pitch’ forces me to make my choices, which are not driven by football knowledge but by what one of the game’s smartest interpreters, Simon Kuper, who has written elsewhere in these pages, calls ‘innocent happiness’. I am not a fan either, for every fan is a fanatic who has an excess baggage of emotions to spare, to the discomfort of others. And I think there is truth in what Nick Hornby writes in his fan memoir, Fever Pitch : ‘The natural state of the football fan is bitter disappointment, no matter what the score.’ Then why bother, as you have more than enough to deal with?

That said, even non-fans are allowed the luxury of mythmaking, of claiming ownership of a fantasy hero. In my private football lore, Diego Maradona is the one. He was not God at play, though they called him one. He was not a machine made to perfection. Still, he won on pure magic—or a ‘bloody miracle’ in the words of his victims. He was that crazy little rascal who was better than all those noble men before and after him. In that match against England in the 1986 Cup, a classic to which we return to savour the sorcery, he is a figure animated by Michelangelo, the creator’s finger reaching out not to Adam but to a mystical ball in the air. Off-field, he was a man damaged by his own tortured soul. When he stopped playing, he wanted the magic to linger. It was as if a beautifully imagined character had lost its home, and fallen to bad reality. Cocaine nearly killed him. His flaws only accentuated his authenticity as a hero, even though, as Kuper writes in The Football Men, ‘never has a great athlete looked less like a great athlete’.

Maybe I like El Diego because he is the last great unimagined character of Latin American fiction. El realismo mágico, at its best, gave liberators and dictators a life more enduring than their historical relevance. In Argentina itself, Evita comes back to millions in the pages of Tomas Eloy Martinez. El Diego waits for his Borges.

I’M NOT SURE who said this, maybe Martin Amis, about the inherent conflict of mediums in book reviews and literary criticism. A review of what is written is not the same as that of a painting or a performance. In the first instance, one writer uses the same craft of language, not to the same degree of success or failure, to assess, appreciate or debunk another. Two writers are at work, and the original has more reason to feel let down. What about a review of a game of football? An essay on a perfect goal? A doctoral thesis on Maradona’s Hand-of-God catharsis? Or on the balletic dribble of Messi? Is there a word that can capture the surge within a player’s head when the ball defies the barrier of human possibility and hits the net? It is the nameless mystery of creation that makes every player, a lone figure in the whirl of 21 others, a work of singular wonder. Words retreat so that the mystery alone lingers in the end.

The Last Glory
Golden Feet
Two Stars and a Constellation
Big Bear Hug
Romancing Brazil
The Fault in Their Stars
Confessions of a Football Hooligan
What Are We Doing There?
Mise En Soccer