It’s time to stop comparing Sachin with other cricketers. He’s among the greatest sportsmen of all time. Cricket is just the game he plays. 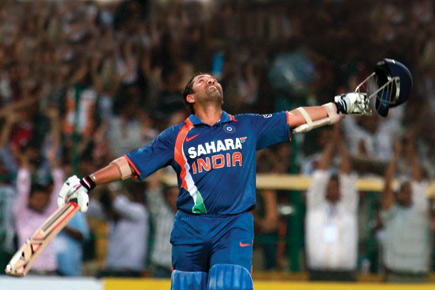 It’s time to stop comparing Sachin with other cricketers. He is among the greatest sportsmen of all time. Cricket is just the game he plays.


The numbers, the numbers. Ninety-three international centuries, 47 in Tests and 46 in ODIs. And after last Wednesday, when he scored the first double century ever in a one-day international, the debate about who’s the greatest of all time was silently put to rest. Ricky Ponting, the closest contender, has 25 centuries less, and it sounds almost like a misdemeanour to even mention him here. Sir Donald Bradman had an average of 99.94 in Test cricket. Sachin Tendulkar will have at least 100 international centuries. No one had magined in his or her wildest dreams that it could be done. This is, to put it bluntly, inhuman.

Thirty-one thousand international runs, 21 years of brutal pressure from a nation of a billion plus, which looks at cricket as catharsis and is also the cruelest and most unforgiving audience in the world. How could he have done it, how could he maintain his focus, how could he still be going out there on the field wanting to do something more, when every world record lies at his feet, pieces of broken china? Yet, he keeps on at it, and if we did not know so well that he is possessed of supernatural resolve, we would have thought he was helpless, possessed by some supernatural power that had a broader, centuries-spanning gameplan in mind: a mirror to humanity that’s also a lesson.

What is to Mr Tendulkar’s discredit is that he makes cricket look simple, giving ordinary mortals an impression that even they can do it. You will be an idiot to believe that. But then, he can’t help it, can he?

Just consider the physicality of it all. The man has played over 1,265 days of international cricket, a staggering statistic. Try to imagine the punishment his body has gone through. He has survived extreme pain and damage, and always come back. There have been rough periods when he was out of form, and the talk at The Last Chance Saloon was that he had forgotten what was most exhilarating about his batting—his sheer violence, his domination of the bowling attack—but he knew better, and we have been shamed. There was a period of two years when he became a boring batsman, taking no risks, just knowing that if he stayed long enough at the crease, he would get the big scores. And he did. And only he could do it. Test your will power: you forgo your natural instincts like last night’s clothes and play ugly knocks, but you make sure you remain unvanquished.

And then at an age when most cricketers retire, you come back like you are 18, with as much joy for the game as when you held your bat for the first time when you were three, long curly hair, grinning at the camera, your stance technically perfect.

What drives him? Still? Yes, he perhaps knows little else in life but cricket, but there must be some incomplete dreams that propel the genius, forcing him to push himself that much harder on the eve of his 37th birthday. Yes, even Sachin Tendulkar can have incomplete dreams.

Here’s an attempt at deconstructing Sachin’s wish list. Three things stand out that he would still want to do. Not for himself, not for the record books (they are fodder for paper shredders already), but for his team, and, if one ventures to use these words, for his country, for his people. We will never know his mind—no one has ever known it in 21 years other than the delight he shows when a wicket of the opposing side falls, and that beautiful smile has remained utterly unchanged all these years (1989, can you imagine? George Bush Sr was President of the United States, India’s economic reforms had not started, there was no cable TV, no one would know about cellphones for another seven years, Shah Rukh Khan was working in TV serials, and Mahendra Singh Dhoni was seven years old! India has had six Prime Ministers since Sachin debuted for his country).

The first and perhaps foremost is the 2011 World Cup. Sachin has scored almost 2,000 runs in World Cups, and also brought India perilously close to winning the silverware in 2003 (he was Man of the Tournament with an aggregate score of 673, the highest ever in a World Cup—go to YouTube and watch him hooking Shoaib Akhtar). Bring it down to basics. This man is a patriot, and his ideology is his sport. He wants to touch and caress the World Cup at the refurbished Wankhede in front of his home crowd. And he knows he deserves it. The tricolour is always visible on his helmet, his gloves are specially designed with the colours of the Indian flag, and he has a flag pinned to his cricket coffin. Finally, when you hear him utter those words—“My name is Sachin Tendulkar and I play for India”— well, that’s it. Yes, Sachin will retire one day, though it seems unbelievable, and as much as him, we won’t know what to do about the missing No 10 jersey and his gladiatorial eyes. It’ll be a loss we will have to deal with (he can’t help), but right now, it is our duty as Indians—or as plain cricket lovers, or people interested in learning something from the lives of extraordinary human beings—to just enjoy his game, each innings he plays, each catch he takes. And if you believe in these things, summon the dark spirits: we want the 2011 World Cup.

Five World Cups. So 2011 will be most likely his last. Though some like Sehwag continue to believe that he has it in him to last out till 2015, it does seem a tad optimistic, even taking into account genius like Sachin’s. And it could happen. India has a team with remarkable batting and bowling depth and, come on, shouldn’t they put in that bit of undefined extra for Sachin? The date is 29 March 2011.

Let us push the fantasy a bit more. Sachin is on 93. There’s considerable cricket to be played over the next 365 days. It may well be that he gets his 100th hundred at the World Cup. A World Cup win to go with the 100th hundred—draw the pentagrams, summon those dark powers. Or, no. You don’t need to take the trouble. He can do it.

Soon after the World Cup, India will travel to England to play what will be one of the toughest Test series on foreign soil. The English under Andrew Strauss have already beaten the Australian team at home to regain the Ashes and have drawn an away series in South Africa. They are, mildly put, a real threat to reckon with at home. A top-rate fast bowling unit with a quality spinner in Graeme Swann, England surely look the part in front of the partisan Barmy Army. And it is here that Sachin will want to tick the second incomplete item on his wish list—a century at Lord’s, cricket’s Mecca.

When India last played at Lord’s in 2007, hundreds of MCC members had turned up to watch Sachin score a century. You could hear the murmur the moment you stepped out of the St John’s Wood tube station and over glasses of champagne at Coronation Gardens. Even at the cost of the English not winning the match, they wanted Sachin to get his name up on the Lord’s honours board. And when Monty Panesar trapped him leg before wicket, the entire Long Room went into a funereal silence. As a member recounted later, “When Sachin walked past us to disappear into the Indian dressing room, the entire Long Room stood up to applaud the man. The loss was ours. We could have given anything to see Sachin’s name on the honours board.” Not many would have hoped that they’d get another opportunity to see him fulfill his dream. And this time round, it’s a new Sachin, one who has rediscovered his art and his genius in the way only he can. The Long Room could well have just cause for another standing ovation.

Finally, India travels to Australia in December 2011, to conquer what we can now label, a la Steve Waugh, Indian cricket’s final frontier. For India to be acknowledged as the undisputed No 1 team in Test cricket. And it is in Australia, his happy hunting ground since 1992, that Sachin Tendulkar will want to achieve his final goal, one that narrowly eluded the Indian team in Sydney in 2004 in Steve Waugh’s retirement Test. Waugh held on, we drew the match, and cricket won. And the world knew why Waugh was one of the greatest.

It was in Australia in 1992 that Sachin showed the world that he was unlike anyone else, even though he was only 19: a hundred at Perth in 1992, still remembered as one of the best scored by a visitor at the Waca, the fastest track in the world. And it is in Australia that he has played some of his finest knocks ever. Even in 2008, after India were mauled at Melbourne in three and a half days, it was Sachin’s master-class at Sydney that set up what is now remembered as one of the best Test series ever. It’s not bloody without reason that he gets a standing ovation every time he steps out to bat on an Australian field, and no one shouts “Wanker” from Bay 13 at the MCG. No one dares. They know it’ll make matters worse. To be able to beat Australia in Australia will be the final feather in Bombay Fat’s cap, one that will vindicate Perth 1992, sweet sweet revenge. Sachin Tendulkar does not beat up people, he shows them their place.

It is time now to think beyond cricket. Sachin is bigger than five days of six hours on the field, lunch and tea, 50 overs in a match indistinguishable from any other. He is a sportsman, he is an athlete, and he needs to be spoken of in terms of men and women who have performed feats in sports believed to be impossible. There is no need anymore to compare him with other cricketers, even The Don. He has to be seen in the light of achievements thought to be not possible, and that has hardly to do with cricket. Michael Schumacher, Diego Maradona, Dhyan Chand, Martina Navratilova, Michael Jordan, Sergey Bubka, Gary Kasparov? Cricket is just the game Sachin plays.

But how can someone love it so much? Sachin Tendulkar won’t know the answer to that. And we will spend our lives baffled. How can he?