“A small team with clever ideas can win”

Formula 1 success takes a winning combination of a terrific driver, chassis and engine, says Adrian Newey, chief technical officer, Red Bull Racing, and one of the best known engineers in the field. In India currently with his team for the inaugural race 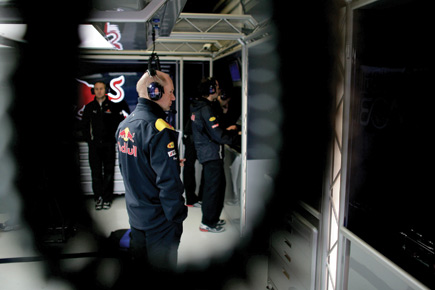 Formula 1 success takes a winning combination of a terrific driver, chassis and engine, says Adrian Newey of Red Bull Racing, and one of the best known engineers in the field.


Q Can you envisage such a thing as the ultimate F1 car, or is it always just going to be a gradual process of evolution?

A Well, the cars are always driven by regulations; if we did not have these constraints, the cars would be very different. The Red Bull X2010 prototype featured in the Playstation 3 game Gran Turismo 5 offers a look at what a Formula 1 car might perform like without regulations. But within the regulations, we currently have the theory that there must eventually be an optimum, which we will slowly evolve towards. That process of evolution gets upset by the fact that rules do change from time to time, and also, you can have parallel solutions, which promise to deliver almost the same ultimate performance but in a different manner. It is almost like two parallel evolutionary paths. Which [of the two] is ultimately more fruitful may take several seasons to find out.

Q What’s so special about Red Bull Racing this year? Your cars are not only the quickest by a country mile, but also the most reliable.

A We have certainly had good reliability to date. We have tried to be very disciplined in the way we design, develop and operate the car. That can change very rapidly; cars are very complicated, they have several thousand components, any one of which can bring them to a stop. Reliability is something we have to constantly strive for, it is an ongoing process.

In terms of performance, well, this year’s car is the third generation of a lineage that began with the 2009 car, the RB5. That car was built within this current set of regulations, which in itself was significantly different from the previous set. The RB5 was a very solid foundation on which we have been able to develop [new technologies]. We have tried to introduce new things, such as the exhaust, which has been copied by others almost in its entirety along the grid. We just have to try coming up with the next new thing.

Q With various types of new technology packed into an F1 car of today, has the driver’s role in the success of the package diminished or increased?

A It changes it. It is almost like comparing a Spitfire pilot to a current fighter pilot. Gear changes are much easier, the driver does not have to worry about temperatures and pressures because all of that is managed and monitored on the pit wall. He does have other workloads; he has to be much fitter than before, for instance, because the G-forces are so high. There is also a lot to manage with the usage of Kinetic Energy Recovery System and Drag Reduction System changing the brake balance around the lap. The skill set is different, but I do not think it is diminished in terms of contribution to the performance of the car.

Q You’ve seen a lot of world champions in your time, how does Sebastian Vettel rank among them?

A I don’t think it is fair to get into comparisons. Sebastian is clearly a very bright young lad who thinks a lot about his task, works hard at it, and is constantly looking for ways to improve himself and the car. He spends a lot of time in the evenings with his engineers, going through the set-up of the car. He learns every time he gets into the car, and very rarely makes the same mistake twice.

Q You’re not too bad behind the wheel yourself. How much of your own racing experience helps in the process of designing a championship-winning F1 car?

It doesn’t really help in the design process, it does help in the process of translating the driver’s concerns into engineering solutions.

Q How special was it for you to drive the RB5 up Goodwood Hill in 2010, and how much did you have to restrain yourself from pushing too hard once you were in the cockpit of an F1 car?

A It was very special; it was great fun to have the opportunity to drive it. Unfortunately, Goodwood Hill is not a place to make a mistake, as it’s just three metres wide, so I was very restrained and took it very carefully. I would love to take the car out on a proper circuit.

Q You’ve had a particularly fruitful F1 career. Give us some highlights.

A I have been lucky enough to have had several. That first race win and first World Championship are very special. The first race win with Toro Rosso and Sebastian at Monza in the wet was very special. And without a doubt, one of the highlights was winning the Championships last year with Red Bull Racing—because we were a young team, starting with the ashes of Jaguar in 2005, and with the aspiration, when I joined, to be involved in developing a team that could hopefully one day win a race or Championship in the future. So it was very special to actually achieve this.

Q Who’s been the most visionary team owner that you have worked for?

A Well, Red Bull Racing is different from the other three teams I have worked for because it is owned by the parent company; it is a racing team subsidiary, whereas the others exist as independent racing teams. They are all very different from each other… all I can say is that I hugely enjoy working for Red Bull.

Q Technologically, how do you see the future of F1?

A I think what is crucial for Formula 1’s health is that we maintain the balance of the three main performance contributors that influence the success of a car and team. That is, the driver, chassis and engine. If we end up in a position where only one or two of those factors become crucial in winning races, then I think it will be unhealthy. Particularly if the chassis becomes so heavily restricted that it is just a driver-and-engine formula—because at that point, it really becomes about which team can afford to buy the best driver and which team happens to have the best engine. At the moment, a small team, such as Red Bull Racing was in 2009, can come from mid-field with some clever ideas and propel itself to the front. If it were to become only about the driver and engine, that would not be good for Formula 1.