A meal with Sachin… and then some 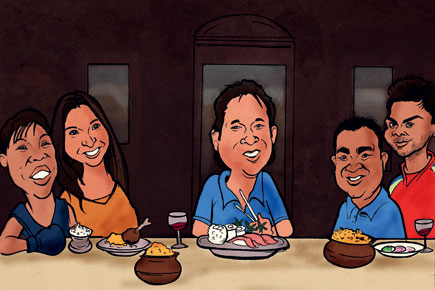 
2 April had just turned to 3 April 2011. But it was a midnight like no other and all of India had bid sleep a temporary farewell. It was party time. In every bylane of the country. After a prolonged 28 years of agony, the World Cup had been won. It was just past midnight when the players made it back up to the sixth floor of the Taj Mahal Hotel in Mumbai. A message was soon relayed to each of the rooms that the party would begin around 3 am. That is when it dawned on Virender Sehwag, Yuvraj Singh and Virat Kohli that none of them had eaten much. Viru said something like, “Arre bahut ho gaya, ab toh kuchh khaya jaaye.” (Enough is enough, time to eat something.) Viru ordered biryani. As the clay pot turned up in 15 minutes, all of us assembled in Yuvraj’s room made a dash for it. It was biryani with the World Cup on the side. Yuvraj, man of the tournament, was in a daze and still a bit teary-eyed. Virat was trying to see how heavy the trophy really was. Viru and I concentrated on the biryani. Celebrating the World Cup win with some architects of the victory devouring some of my favourite food ranks as one of the best memories of my life as a cricket journalist.

In trying to look back at meals one has had with Indian cricketers, I would have to single out a meal each with Sourav Ganguly and Sachin Tendulkar to start with. With Sourav, we were dining at University of Central Lancashire in Preston, North England. The university was conferring a distinguished visiting fellow honour on him and a lunch was par for the course. Hosted by the Vice-Chancellor, the food included lobster as the main course and chocolate mousse for dessert. With the domestic cricket season just a month away, Sourav did not touch the decadent mousse despite wanting to. However, we both loved the lobster and kept talking about our own Bengali favourite—chingri machher malaikari—all through the meal. We had spent a month or more in England by then and had started to miss home. While feasting on the lobster, the discussion centred on the subtle differences between the sarse diye chingri machh and the chingri machher malaikari we both have at home. Sourav, a foodie, is a fantastic companion for lunch.

The other real foodie, in fact like no other I know, is Sachin. The first meal with Sachin that I wish to recount was at Masuri, a Japanese restaurant in Adelaide, earlier this year. We had been planning a Japanese meal for quite some time and finally decided on going out before the start of the Adelaide Test. The sushi and sashimi were divine and we had all but forgotten that we had my colleague, Times Now journalist Harini Rana, with us and that she was vegetarian. The smell of the raw fish made Harini so uneasy that she was suspicious even of the vegetarian tempura placed in front of her. Sachin told her that tempura was “just like bhaji (pakora).” That did not help much. After we had dropped Sachin back to the hotel, Harini said to me softly, “Sir, can we please go to a Subway on the way back?”

Sachin understands the intricacies of Japanese food. He was swift in making a blend of the wasabi with a dash of olive oil to dip the raw fish into. The concoction, an improvisation, tasted fantastic. And the excitement in his voice when he orders food is the same as that when he talks about his other passion, music.

Another memorable meal with Sachin was lunch at his house in Mumbai a month-and-a-half ago. It was in the ground floor dining room. On the walls behind the dining table hung three of the most treasured awards in India, the Padmashree, Khel Ratna and Padma Vibhushan. To read each of these certifications of merit and see them all next to each other is daunting, to say the least.

The meal was simple but tasty home fare, which we both devoured by hand in typical Indian fashion. There was dal, vegetables, prawn and mutton, roti and rice, followed by kulfi for dessert. It was in the course of this meal that Sachin mentioned his intention to play a Ranji Trophy match against the Railways and one could easily see his steely resolve to do well in the series against England. He had already started his mental preparations and the Railways match was one piece of that pyramid. A man with a taste for dessert, he just nibbled on the kulfi. What is impressive is Sachin’s attention to detail and his fellow diners. He insists on serving his guests the first course himself.

This story will remain incomplete if I leave out the drink part of it. I had one of my best cricket nights out with Clive Lloyd and Haroon Lorgat, talking cricket till 3.30 am during the ICC Centenary Cricket Conference in Oxford in 2009. Lloyd, who I call ‘Governor’, was in full flow past midnight. Grumpy to start with, shots started flowing from his mouth after the first few pints of beer had been guzzled. Soon he was giving us gems like the following. “When I first met Bishen Bedi during the 1967 tour of India, I was stunned. I hadn’t seen a man with a patka before. I wondered what his headgear was all about and if it had anything to do with his cricket.” Lloyd also revealed, “When we were walking back after dismissing India for 183 in the 1983 World Cup final, I did not have a good feeling. Jeffrey Dujon too felt the same way and we were both right in the end.”

After Governor had downed a couple of jugs of beer and the clock had moved past 2 am, he wanted a final drink before going to bed. With everything shut in the university town, our only option was to check out a mobile kebab van on St Giles Street open till about 2.30 am. As we were making our way there, a group of students stopped Lloyd. Haroon and I thought they may have recognised the legend and would ask for an autograph. One of them did walk up to Lloyd and said, “I know who you are. You are the boxing promoter Don King.” Lloyd did not say a word and just made his way forward with a somewhat disgusted look on his face.

While I recount the ICC Centenary Conference, I can’t not talk about my favourite Bishen Singh Bedi story. Bishenji, one of my favourite cricketers of all time, had agreed to come and speak at the conference. And the morning session with Bishenji and Clive Lloyd conversing with each other was surely one of the best parts of the symposium. Bishenji was to be part of another session in the afternoon with Sourav, Angus Fraser, Bob Willis and others. With the session due to start at 4 pm, I had started asking my participants to make it to the Nissan lecture theatre at 3.50 pm. There was no sign of Bishenji. At 3.55 pm I called Mrs Bedi. She said rather apologetically, “Boria, Bishen is sleeping. I think he enjoyed the lunch and the wine and has forgotten there was another session at 4 pm. I don’t think I can wake him up and get him to the venue in the next five minutes.” Bishenji, however, made up for the afternoon at dinner, and the audience was enthralled by some fantastic cricket anecdotes from his career.

Moving away from cricket to my two other favourite food stories related to sports stars, I just need to go back a couple of months to the London Olympics. The first was at Sania Mirza’s Leopold Road Apartment (a rented apartment just a lob away from Wimbledon). The second involves MC Mary Kom at the London Olympic village. Sania, who loves her halim and biryani

, had just won a very good match partnering Leander Paes against Ana Ivanovic and Nenad Zimonjic. Sania’s parents, her sister Anam and I were in the mood to celebrate. Mrs Mirza had ordered a lot of food. Sania’s father, Imran, who was fasting for Ramzan, agreed to join us at 8.46 pm. Just before the food arrived and each of us jumped at the chicken and roti, I asked Sania to give me some insights into her culinary skills. She rather nicely returned my serve and said, “Let’s get the table ready.” My persistence, however, paid off and she soon confessed that, “All I know is [how] to break an egg, besides making tea.”

Finally to MC Mary Kom. The day after she had won her bronze medal, she attended a felicitation at 4 pm. But she got lost on the way back to the Olympic Village. Her face red with frustration and make-up, which was very unusual to start with, Mary first vented her anger at the organisers before agreeing to a chat with Viren Rasquinha of Olympic Gold Quest and me. Before I could ask her about the medal, she said, “You know I was thrilled when I was coming to England. Emirates [the airline] did not charge me extra luggage for my rice cooker.” Viren completed the story. “Mary Kom without her rice cooker and sticky rice is incomplete.”