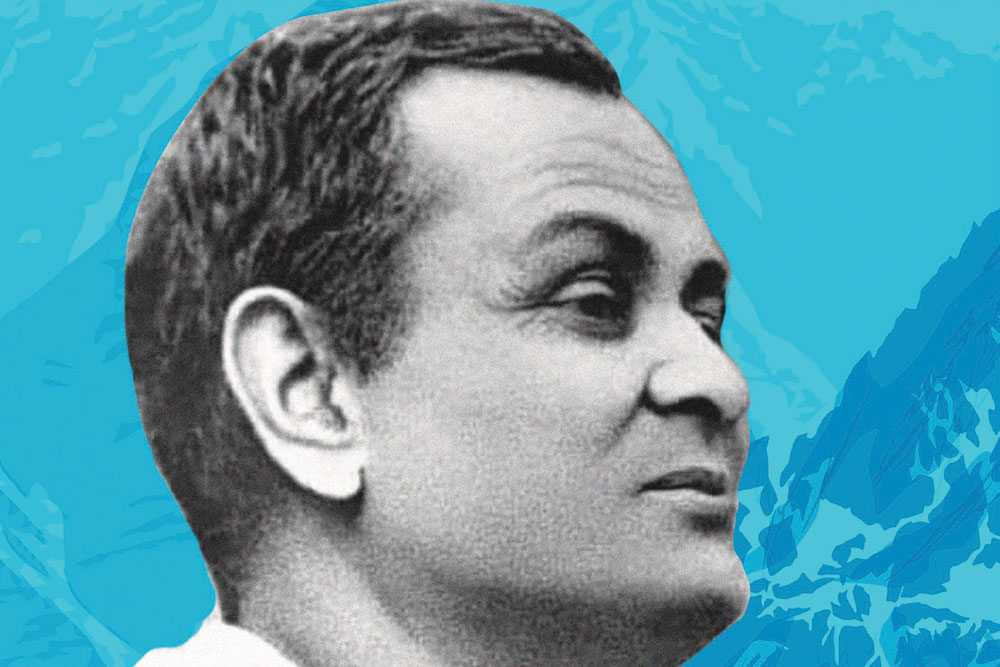 
FROM 1929 TO 1938, an Indian scholar called Rahul Sankrityayan discovered a number of Sanskrit manuscripts in mid-western Tibetan monasteries that ‘shaped the very basis of modern scholarship in the field [of Madhyamaka philosophy and, in general, Buddhist epistemology]’, in the words of Ernst Steinkellner, one of the great scholars of Tibetan Buddhism of the 20th century. By now, Sankrityayan is largely forgotten in India except among students of Buddhism and an older generation of Hindi literature aficionados.

On May 25th, 1936, during the third of the four journeys Sankrityayan would make to Tibet, he entered a nondescript room perched high up at the Sa-skya monastery close to Mount Everest. When he pushed the door, ‘a cloud of dust arose’ and, he adds, ‘our throats were choked with dust’ and the floors of the room were ‘covered with a layer of dust about one-third of an inch’. Eventually, after working his way through long forgotten manuscripts, he laid his eyes on a bundle of palm-leaf manuscripts. About that moment, he writes: ‘It is beyond my power to describe my feelings when I saw among those 25 volumes the complete Pramanavartikka Bhasya, a portion of Dharmakirti’s own commentary on the first chapter of the P.V… .’ Decades later, after Sankrityayan’s travels and discoveries had led to elaborate studies, Steinkellner writes, ‘Much of the progress in Buddhist studies [particularly Buddhist epistemology] achieved during the post-war 20th century is due to Sankrityayana’s vision and labor.’

The monasteries of Shalu, Pokhang, Ngor and Sa-skya are not easy to get to—even today—in part because of the inclement weather as well as, in those days, owing to robbers who viewed interlopers on donkeys, with manuscripts and photographic equipment, none too kindly. Eventually, when he made it back to India, he notes casually that during the four-and-a-half months in Tibet, he took 1,400 photographs of Sanskrit manuscripts. During the course of his journeys, he found texts by Asvaghosa, Dharmakirti, Jnanasri Misra and others—names in Buddhist philosophy that still preoccupy scholars.

What brought Sankrityayan to Tibet was an increasing recognition that monasteries scattered across the highlands—from Sikkim to the Everest to the upper ends of the Central Asian Plateau—held in their possession vast repositories of manuscripts in the original Sanskrit, as opposed to their copies in Magadhi or Tibetan. Some of these manuscripts had arrived in Tibet around the 13th century when monks fled the greater Bengal-Bihar areas after monasteries like Vikramsila were destroyed. What however did add a sense of urgency to Sankrityayan’s own journeys was that it was also an age when manuscripts were increasingly sought after by European expeditions which had begun to trek deeper into Central Asia after the end of World War I. Perhaps the most famous among European scholars in search of manuscripts was Giuseppe Tucci—an Italian Orientalist who had been asked by Benito Mussolini to go out into the East. Later, Tucci, an intellectual and a fellow traveller with fascists, declared that he had ‘found’ Tibet for Europe. From Asia, Japanese scholars had begun to make similar efforts to access manuscripts, if not in Tibetan or Sanskrit, then at least in their Chinese translations. They, in turn, were further aided by the social and financial prowess of the resurgent Japanese empire of the 1920s and 1930s. The 20 years between the two World Wars was the age of a great scramble for manuscripts in the Central Asian highlands, including Tibet. Having witnessed and participated in this ‘great game’, of sorts, Sankrityayan ended up writing two monumental volumes called Madhya Asia Ka Itihas (The History of Central Asia).

All this while as Europeans and Japanese explorers were in search of manuscripts, Sankrityayan had been working on trying to painstakingly restore copies of manuscripts from Tibetan to Sanskrit. Among the texts he was working to restore was Dharmakirti’s Pramanavarttika (Commentary on Valid Cognition), which was a commentary on a foundational text called Pramanasamuccya (Compendium of Validities), which was in turn written by a monk called Dignaga, acknowledged as the pater familias of Buddhist logic in the first millennium. When Sankrityayan heard that a Nepalese pundit called Hemaraj Sharman had discovered the original Sanskrit text of Pramanavarttika in a Tibetan monastery, he abandoned his restoration efforts and decided to go inspect the original manuscript himself. In July 1936, two months after the discoveries at the Sa-skya monasteries, Sankrityayan discovered another major text: this time a Sanskrit version of the Vigrahavyavartini (Dispeller of Disputes), in which the great Nagarjuna clarifies misconceptions about the doctrine of universal emptiness. Over a period of four months, Sankrityayan discovered other texts that had lain unused and forgotten for centuries. The result of these journeys is that his name shall forever be remembered as long as Madhyamaka Buddhism is studied and followed.


Rahul Sankrityayan’s own evolution as a person happened thanks to a series of contestations within himself about who he was. What marked him as special was the willingness and courage to go where those internal dialogues took him—with little concern for orthopraxes or social commitments

During his lifetime, Sankrityayan was a majestic personality to behold—a mahapandit as he was often called and written about. In our times, he is often acknowledged as the father of Hindi travel literature, including as the author of a slender book called Ghumakkad Shastra (A Treatise on Wandering) in which he commingles scholarly seriousness and tongue-in-cheek frivolity. Perhaps his most popular book is Volga Se Ganga Tak (From Volga to Ganga), a historico-philosophical fiction on the origins of man and Indian society that is one part Jared Diamond; another, Robert Pirsig; and the third, Yuval Noah Harari. In more ways than one, as a litterateur Sankrityayan was ahead of his times while as a scholar of religion, he could very well have been a teacher at Vikramsila in the 13th century debating the newly emerging ideologues of the Navya Nyaya school.

Sankrityayan was born Kedarnath Pandey, a name that he slowly abandoned during the course of his life as he became Ram Udaar Das Sadho as an initiate in a Vaishnavite order. Later he joined the Arya Samaj and called himself Kedarnath Vidyarthi; before long he became a Buddhist monk and came to be known as Rahul Sankrityayan, the name by which he became famous. Along the way, he fashioned himself as a Marxist, an anti-feudal activist and a kind of nationalist who is largely extinct in our public discourse—one who could only love his country by loving the world. Unlike the Portuguese writer Fernando Pessoa who wrote as four personas at the same time—some estimate that Pessoa may have written as more than 80 people—in case of Sankrityayan, these names were neither elaborate literary games nor were they the consequence of some fractured psychological self. Rather, they were part of his own efforts to live a life of radical truthfulness as he understood the world better. Like much of Indian philosophy, of which he was an especially perspicacious student, Sankrityayan’s own evolution as a person—from a Brahmin boy to a Marxist intellectual by way of Vedanta, the Buddha, Krishna, Nagarjuna and Dharmakirti—happened thanks to a series of contestations within himself about who he was. What marked him as special was the willingness and courage to go where those internal dialogues took him—with little concern for orthopraxes or social commitments.

Thinking about a life like Sankrityayan—one so supple in its intellectual ambitions, a life that was willing to acquire and abandon self-descriptors—only reveals how difficult it is to live authentically. Especially one lived in the public eye runs the risk of being traduced to some performative ideologue who eventually no longer even cares to hide that intellectual rigor mortis has set in. Alongside, a life like Sankrityayan also reveals the bland truth that across Indian languages there are perhaps others like him who have walked alone, their footfalls marking out a path for others—but we no longer know how to speak of them, their in-between lives that belonged neither to the metropole nor the periphery. Their shapeshifting journeys into their own interior strike us as strange. For, by now, we have told ourselves that to change one’s mind about our relationship to the world is a sign of opportunism or, worse, cowardice. Sankrityayan’s life tells us that changing one’s mind is a prerequisite to uncovering who we are, to going past illusions we mistake for ourselves.