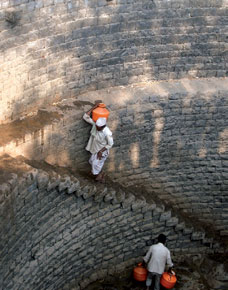 
Maharashtra is currently reeling under one of its worst droughts in decades, with the Chief Minister recently calling it more severe than the one that occurred in the state in 1972.Around 11,801 villages are grappling with drought because of poor rainfall the previous year. Crops have been badly hit, cattle are without fodder and the government is struggling to provide drinking water. There are also media reports about large-scale migration from these parts to nearby cities.

Recently, an Empowered Group of Ministers, headed by Agriculture Minister Sharad Pawar, approved a Rs 1,207-crore relief package for the state. Maharashtra Governor K Sankaranarayanan told the newspaper that while in February 2012, the number of tankers supplying drinking water to these regions was 230, in the same month this year, the number has risen to 2,136 tankers. Additionally, 554 cattle camps have been set up where a reported 450,000 animals are provided fodder. Some, like journalist P Sainath, argue that the state’s skewed water policies are to blame. A recent editorial of his in The Hindu describes how water is being diverted to private developers’ real estate projects and golf courses. And how sugarcane, which consumes large amounts of water and has a strong lobby in the state assembly, is continuing to be grown in these parts.

The situation is likely to worsen in the summer. Already, growth projections for the gross state domestic product in the current fiscal year have dropped to 7.1 per cent from earlier estimates of 8.5 per cent. According to the state’s recent economic survey, agriculture and allied sectors will shrink by 2.1 per cent in the current fiscal year. Also, food grain production is expected to drop from 12.7 million tonnes to 10.4 million tonnes.