Kerala’s fishing community, the first to volunteer for rescue and relief operations during floods, is plagued by social and economic marginalisation 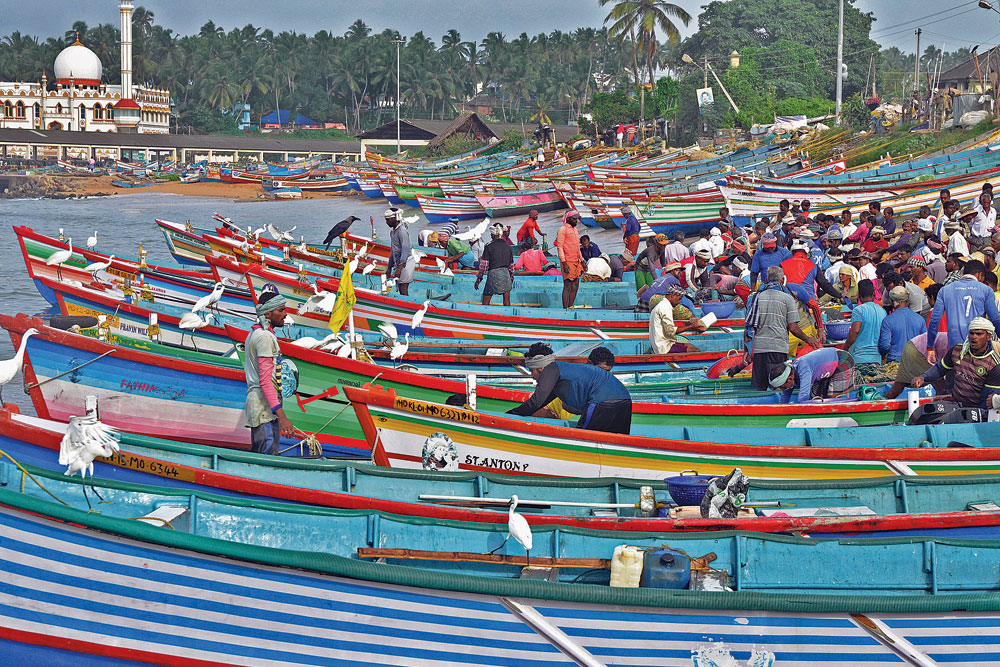 
A YEAR AGO, when unprecedented floods sank large swathes of Kerala, the state’s fishing community rescued thousands, keeping the death toll low amid the devastation. And when heavy rains this month led to flooding for four days from August 8th, they didn’t hesitate either. In many parts of northern Kerala, the ‘fishermen army’ arrived with boats to shift people to safer places. When the forecast said the storm would move from north to south Kerala, the government called for a team of fishermen to be sent to Pathanamthitta district, one which had been the worst hit last time, and they again willingly cooperated. Such service is however rarely reciprocated by mainstream society. The community is far below the social development standards achieved by the state in general. They are reeling under debt and as fishes go scarce in the waters, economic deprivation is hitting them hard.

“We were praised all over after last year. But the hard battles that a fisherman has to fight in his daily life remain the same. It gets even worse after every hit of climate change,” says Pani Adima John, an activist of Kerala Swathanthra Matsyathozhilali Federation (KSMTF), one of the oldest trade unions in the fisheries sector. Nothing exemplifies the plight of Kerala’s fishermen more than the story of Luis Christudas, a fisherman and native of Adimalathura village. On July 17th this year, he and six other fishermen were reported missing at sea. Search operations by the Coast Guard and Navy drew a blank and the seven were written off as dead. Family members and neighbours even started preparations for funerals. And then, by almost a miracle, four of them came back alive after being adrift in the sea without food and water for four days.

When we met Christudas at his home in Valiathura near Thiruvananthapuram, he was yet to recover from the trauma of coming face to face with death. There was only one chair in his home which was offered to me and he sat on the floor on a mat. It was a struggle for him to walk from the bedroom to the living room. Both his legs were swollen and there were wounds all over the body.

On July 17th, when he and three others left in a fibre boat, an early warning had been given cautioning fishermen from sailing into the deep sea. However, they had no idea about it. About 26 km into the sea, rough weather overtook them. “The engine was turned off. We lost control. The wind took us 35 km farther and the boat turned upside down. I was thrown into the sea but managed to get back. We anchored the boat somehow in the sea,” he said. They were lost and without provisions, unable to get back. What rankles is the absence of any assistance. “We were in the sea only for four days. The Navy could not locate us. If this is what they do, how poor is the coastal security of our country?” he asks. On returning, what they had to face was equally bad. They were sent to the hospital of the medical college in the region where they encountered apathy and negligence. “We hadn’t had food and water for four days. I was unable to walk. I was still asked to go for the X-ray and scanning by myself. I was not even given a bed,” he said. After waiting a couple of hours in the hospital, Christudas walked out and came home. Local political leaders and police rushed to his place after the media reported how he had been treated.

“The fishermen were honoured and given awards [after last year’s floods]. Everybody talked good about us. But life remains the same for this community,” says P Stellus, president of KSMTF. According to him, no one is genuinely interested in the welfare of fishermen. No sustainable long-standing solutions have been looked into for their hardships, whether it is sea erosion, loss of housing and livelihood, debt trap, poverty and all sorts of social and economic marginalisation.


The total population of fishermen in Kerala is one million with marine fishermen making up 700,000. The number of active fishermen is however only 236,000 (trade union leaders and activists say that this data is not correct because only those registered with the welfare fund board are counted). The community’s younger generation doesn’t want to get into the profession. Kerala occupies foremost position in marine fish production, accounting for about 20 per cent of total landings. The state has a long coastline of 590 km and 400,000 hectares of rich inland water bodies. There are 222 fishing villages. But in recent times, according to the Department of Fisheries data, there has been a gradual decline in the catch. Kerala recorded the lowest fish production growth rate among coastal states in India between 2004-05 and 2010-11. There is an acute shortage of quality fish seed as well. Fishermen too trace it back to 2004, when the tsunami struck the Kerala coast. “Fishing is fast becoming a non-viable activity. Recurring natural calamities like the tsunami, seasonal cyclones and floods took a toll on us,” says P Ashraf, a fisherman who lost his house in the heavy rain and sea erosion last month. A native of Beppur in Kozhikode, Ashraf, his wife and three children relocated to a relative’s place from where he is not able to send his children to school. His fibre boat was also damaged and he has not been able to go fishing for a few weeks. “I borrowed money from a private moneylender to repair the boat and buy nets. I am in a debt trap now,” he says.

Falling prey to private moneylenders at usurious interest rates is a common problem among Kerala’s fishermen and the government says it can’t do anything about it. “We are helpless in this matter. We can only consider waiving off the money borrowed from public sector banks and cooperatives, but we are aware that this is a serious problem that pushes the community further into the margins,” says P Vijayalakshmi, secretary of Kerala State Fishermen Debt Relief Commission. Even the waiving of debt belonging to public sector banks and cooperatives is minimal, the commission having given approval only for the year 2007-08. Very few fishermen have benefited from this.

No sustainable solutions have been looked into for the hardship of fishermen, whether it is sea erosion, loss of housing or poverty

According to the fisheries department statistics, 28 per cent of the fishermen households in the state still live below the poverty line. The National Sample Survey data indicate that most fishermen are undernourished, being highly deficit in both calories and protein intake. The sea surge and destruction of houses have become an annual affair. There are fishermen families in the state capital, Thiruvananthapuram, living in camps on a permanent basis. Schools in the coastal belt have been used as shelter homes for over 20 years. Valiyathura Government UP School is one—it is being used as a shelter camp since 1999 with as many as 110 families currently residing there. “We have been here since five months. We tried our level best to get a rented house but everybody is asking a very high amount” says Midhun, a native of Valiyathura village, whose house was washed off. Though he is from the community, Midhun does not do fishing as an occupation. His wife Reji, a graduate, works with an NGO. With their eight-month-old toddler and an ailing mother, they sleep in an open place in the school. “By the time we reached, all the rooms in the school were occupied. We didn’t even get a room,” says Midhun. Even for those who got rooms, it is not a rosy picture. Five to six families together occupy one room and it is hard for women to even change clothes. There is only one toilet for all the 110 families living in this camp.

Forty-five-year-old Bosco and his family have been living in this shelter camp since a year. He was an active participant in the rescue and relief operations during the Okhi cyclone which hit Kerala end-2017. “I assisted the Navy in their search in the sea for several days. I sailed with the Coast Guard too to find missing fishermen. We could not find anyone. I lost my sister’s husband too in Okhi,” he says. Bosco went for rescue operations despite being injured after his boat had crashed against a rock. The next day, an emergency meeting was called in which a minister asked for help from fishermen. Bosco volunteered, ignoring his injuries. However, since the cyclone, he continues his life in a shelter camp.

Women in the community are worse off. There has been a drastic fall in the number of women fish vendors. In 2015-16, there were 69,695 of them and official figures say it went down to 5,977 in 2017-18, a 91 per cent decline in three years. The reason is attributed to cyclone Okhi. Mercy Alexander, a women’s rights activist and former state-level leader of KSMTF, observes that the data could be deceptive and the number could be even higher. “The official figures include only those who have registered in the welfare fund board. It doesn’t cover even 50 per cent of the fisherfolk in the state. The actual number of women being displaced from the employment sector in fisheries is many times this figure.”

The community has a rich history of trade unionism, church interventions, the active presence of NGOs and perennial struggles for claiming rights. The Latin Catholic Church plays a decisive role in shaping the priorities of the community in Kerala’s southern districts. “The Church and NGOs under it have played a crucial role in hampering the social and economic progress of the community,” says Stellus, who has also been an office-bearer of the Thiruvananthapuram Diocese for four years. He alleges that the church used the community as a vote bank to negotiate with political parties and in return, fishermen gained nothing. Both the UDF and LDF governments did nothing of any consequence for them. “They make declarations that go void after a point of time. The fishermen community is facing massive displacement from the narrow strip of coastal land due to perennial sea surge every year. We have been facing this since 20 years. The latest in the long list of hollow promises is the declaration of a package of Rs 2,000 crore for the welfare of the fishermen community. Nine months have passed. Not even a Government order has been issued yet,” says Stellus.

During last year’s floods, Jaisal KP, a young fisherman, became famous when he let people step on his back as they embarked the boat during a rescue. Jaisal also lost his boat in the flood last year and has not been able to buy a new one. But he continues to work selflessly for others. When we talked to him, he was busy raising funds for the treatment of a poor man suffering from liver disease. “We don’t ask anything in return for what we have done in the flood but demand only our legitimate rights. Fishermen here live in abject poverty, many of us lost boats and other equipment. What we gained is the title ‘Kerala’s Own Army’, and nothing else,” he says.