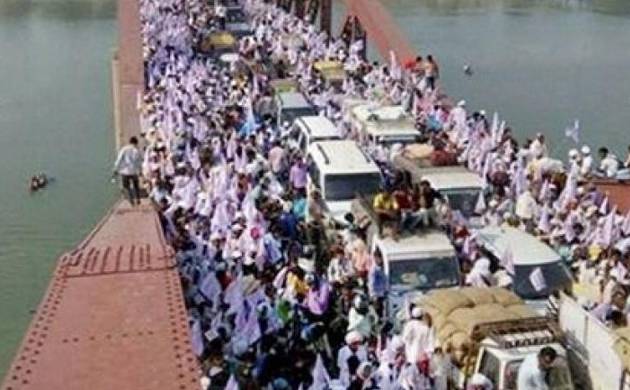 Varanasi was covered with posters and banners of Pankaj Maharaj of Jai Gurudev sect almost a fortnight before the tragic incident which claimed 24 lives. On 15 October, a procession was planned by  Jai Gurudev Seva Sansthan to spread awareness about alcohol addiction and to promote vegetarianism.

The local administration was aware of the huge gathering. But sadly, there were no visible arrangements in the city, which experiences religious gathering regularly. Almost a week before the event, followers of Jai Gurudev sect had started gathering at Domri village, on the banks of the Ganga near Rajghat in Varanasi.

The crowd of followers had swelled up to nearly ten thousand whereas the organiser had sought permission only for 3,000 who were expected to attend the procession march. According to eyewitnesses, there was no security arrangement at the site and the scene had become chaotic much before the procession began.

By 10 a.m., it was chock-a-block situation in the city and the policemen remained mere spectators. The narrow Rajghat Bridge which connects Varanasi to Chandauli, a mofussil town bordering Bihar, was occupied by supporters of Jai Gurudev who were chanting slogans and trying to move ahead towards Domri village, the venue of congregation.

The police decided to stop the movement of vehicles on the bridge from both the sides as the crowd started gathering. In order to manage the crowd, the police started sending them back to Varanasi via Chandauli. Those on the bridge turned back and started moving towards the other end.

The police however, did not stop the crowd at the entrance of the bridge, while the other side of the bridge was blocked. The situation became worse with the death of an old woman who was suffocated in the middle of the bridge. People had started running into each other without any clue and direction. To save themselves, children took the help of iron girders of the bridge.

The police was able to pull the people who were at the ends of the bridge while those stranded in the middle could not be reached. 24 people, mostly women died in just twenty minutes. Some even jumped into the river and were saved. By the time additional forces were rushed to Rajghat, it was too late.

The gross negligence and unpreparedness of the local administration resulted in a tragedy that will haunt Varanasi for years to come. Late in the evening on Saturday, the Uttar Pradesh Government suspended five police officials including SP city (Varanasi) and SP traffic.

“Gross failure to anticipate the swelling crowd and make adequate arrangements accordingly has led to the suspension of these five officers,” said Javed Ahmed, DGP, UP. The state Government has also ordered a magistrate level enquiry to find out the reasons for the stampede