If diversity and pluralism is at the core of Indian gastronomic culture, tea is the defining symbol of British identity 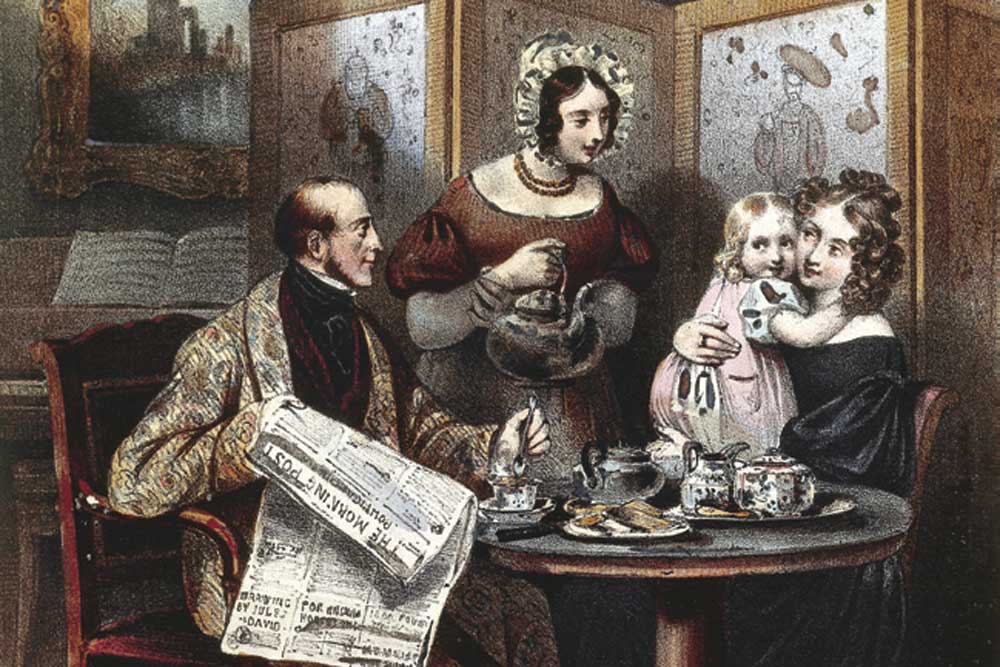 HOW DO YOU write a history of food in a country as diverse, as vast and as fragmented as India? Even the concept of ‘Indian’ food is quite bewildering and seems unidentifiable once one begins to delve deeper. So, to take on the challenge of writing about a history of food in India, as Colleen Taylor Sen does in Feasts and Fasts: A History of Food in India (Speaking Tiger; Rs 699), is a brave act indeed. While the title—‘a’ history, not ‘the’ history—suggests modesty in the endeavour, the questions posed by her do not lack ambition.

After commenting on the diversity and multiple layers introduced by history and geography to the palimpsest of Indian cuisine, ‘in which no layer ever hides or erases what has gone before,’ Sen poses the questions tackled by the book. What makes Indian food recognisably Indian? How did it come to be that way? Is there a gastronomic culture common to all Indians?

Her modus operandi is to trace the history of Indian food —using reports of archaeological discoveries, accounts of travellers, philosophical texts and so on—from prehistoric times to the present in the context of historical, social, religious and philosophical developments. One chapter is entitled ‘Food and Indian Doctors (600 BCE-600 CE)’, another is about the Delhi Sultanate, and the last two chapters deal with new trends in Indian food (1947-present) and the food of the diaspora.

The chapter on climate, crops and prehistory has interesting titbits—coriander and cumin that one associates with Indian cuisine are actually imports from South East Asia. Chilies came to this country only with the voyagers from the New World in the 16th century. We also learn that our prehistoric ancestors were quite enterprising: as early as 6500 BCE, they were cultivating primitive forms of barley and wheat, and their main cooking fuel was juniper wood. By the second millennium BCE, the technique of steaming flour was quite the rage—as one might conclude from the excavation of perforated bowls with spouted lips. The Indus Valley folks (between 2500 and 2000 BCE) were using turmeric, ginger and garlic. These are distillations from research conducted by archaeologists, philosophers and Vedic scholars, and it gives one an easy glimpse into hitherto unknown eras. ‘Flavourings used in Vedic times included mustard seeds, turmeric, black and long pepper, bitter orange and sesame seeds.’

We also learn about the origins of some cultural practices. For instance, even in the Vedic age, men did not eat with their wives, nor did women take their food in the presence of their male relatives. So, the patriarchy that is rife today, and not just in India, seems to have ancient origins. In the middle of the first millennium BCE, Brahmin priests wrote a series of prose texts called the Dharmasastras, an extension of the ritual prescriptions of the Vedas. It included instructions for the people on what, when, and how a person could eat at different stages of his or her life, belying, in one scholar’s words ‘The common assumption that ancient Indian society was uniform and stifling under an orthodoxy imposed by the Brahmins’. Here we see, in writing, the taboos associated with castes—garlic, leeks and onions are forbidden to men of the twice-born caste, as are mushrooms, meat from a slaughter house, alcohol and so on. Taylor Sen dips into the accounts of historians, travellers and grammarians to show what people ate and why they ate that way. For instance, the fourth-century linguist, Panini, is quoted on the three types of food—supa which is like daal or rasam, meat, and vegetables. It is quite a revelation that we still eat what people ate thousands of years ago. It makes one realise the glacial pace of change in a culture, ritual and most importantly, in our relationship with food.

Taylor Sen’s easy, conversational style of writing provides a coherence to events that are bewilderingly contradictory, opaque and span many centuries. But this coherence is an illusion; it is not possible to discern from her account, a specific set of characteristics that relate to an ‘Indian’ cuisine. A glimpse is all we get—it is like being in a fast train speeding through the ages, civilisations and religions. The whistle-stop tour leaves us with more puzzles than answers, but that is alright.

Returning to the questions posed by Taylor Sen at the beginning, the book is better on question two: how did whatever we call Indian food (and it is not clear from her book if there is such an entity) come to be that way? The book answers the question in the only way it can—by collating and describing the multiplicity of foods, modes of cooking, and histories—and by doing so, highlights the pluralism that informs the concept of ‘India’. Whether there is a gastronomic culture common to all Indians is less obvious. ‘It is no exaggeration to say that an example can be found to refute any statement made about Indian food,’ concludes Taylor Sen. If so, is there really a core to Indian food? Well, her answer is that ‘despite its shortcomings, a regional survey is the most practical way of describing the diversity and richness of the subcontinent’s cuisine.’ Which means that diversity and pluralism is still at the core of cuisine in India, making food in India too echo Naipaul’s description of the country as a ‘million mutinies’. So it is not surprising that the search for an ‘Indian’ gastronomic culture has become a hunt for the Holy Grail.

IN CONTRAST, Empire of Tea: The Asian Leaf That Conquered the World (Speaking Tiger; Rs 499) by Markman Ellis, Matthew Mauger, Richard Coulton, charts the path of one beverage primarily in Great Britain. The narrative begins with the 17th century ‘discovery’ of a hot infusion of oxidised and prepared leaves of Camellia sinensis by British natural historians when they voyaged to China. But, as the authors point out, the Chinese had a long history of consuming that frothy infusion. The earliest reference to tea is over 2,000 years old, in the satirical The Slave’s Contract by Wang Bao, a poet and humourist in the court of Emperor Xuan (91-49 BCE). Anthropologists use the concept of foodways to assess how ethnic groups develop shared habits of food consumption. Ellis, Coulton and Mauger, three scholars at the University of London, focus on the passage of tea through Britain’s foodways ‘by looking beyond the beverage itself to its effects and significance’ within the wider national and international culture. It is a story about how tea moved from a time in the 16th century when none in England knew about it, to the late 17th century when tea drinking had become an established aspect of elite and aristocratic social and domestic life in England, to the 19th and 20th centuries when tea became the defining symbol of British national identity.

One of the delightful puzzles posed in the book is: how does tea, a foreign entity, become so entwined with Britishness within two centuries? How is value created for an object? Tea is initially only consumed by the wealthy elites. Tea preparation, say the authors, was one of the few activities upper-class women and men were proud to perform themselves. So how did it percolate downward and become a beverage of the labour classes? The answer is, of course, complex: it involves creating value through myth-making (English poets situated tea in classical Rome in their odes to the leaf), and magazines such as the Spectator advocated tea as a symbol of urban sociability. ‘Groups of friends should assemble at the tea table every morning for tea, bread and butter and to read.’ It also involves creating the buzz about tea-drinking as a practice worthy of being emulated by the lower-classes, and even more importantly by ladies. Tea’s appeal transcended gender (unlike the coffee houses which were male bastions). This can be seen in a painting by Richard Collins in 1727. The Tea Party depicts a woman, her husband and two daughters gathered around a rectangular wooden table, holding tea cups. The painting epitomises genteel domestic civility. The five o’clock tea in the houses of the aristocracy was different from the high tea of the labour classes, but both, along with the middle-classes, consumed the beverage.

The authors take us on a wonderful journey to view tea’s role in empire-building by Britain and the response by the colonised. The narrative zig-zags through charming vignettes about philosophers (John Locke in the 17th century discovered a taste for tea after his exile to Holland in 1683) and noblemen (the Duke of Bedford had a special upper servant to purchase tea), to debates about tea’s curative properties particularly in the ‘self medicating’ Victorian age (tea was considered non- intoxicating in a temperance-fixated Victorian England), to tea’s appeal as a provocateur in the American Revolution (340 chests of tea were cast into the sea in Boston in 1773).

The fact that the dried leaf was not a homogeneous product, but a differentiated one, made it easier to grow tea in different countries and supply different grades to different classes. ‘When the question seriously began to be asked whether India itself might offer the soil, climate and topography necessary for the cultivation of tea, an astonishing (re)discovery was made: a variety of tea was already growing there.’ So in America in the 1770s, India in the 1830s, and China in the 1840s, tea became a lever upon which British imperial strategy itself was effected. Sugared tea and white wheaten bread became the nutritional mainstays in cottages and factories from 18th century onward, because more tea was available in grocery shops due to a fall in excise duty and price.

Today, the use of the tea-bag has made tea-drinking more convenient and more efficient, but one wonders whether it has come at the expense of something valuable— that is, in the disappearance of the semi-ritualised preparation of the brew and the reflectiveness it had evoked in the performer of the ritual. Empire of Tea returns us to that space of contemplation. It is a deeply rewarding book not just for the aficionados of tea but also for someone like me, a devotee of coffee.