The Kerala government wants to stop the state’s obsession with the occult with a law against superstition. Can black magic be contained? 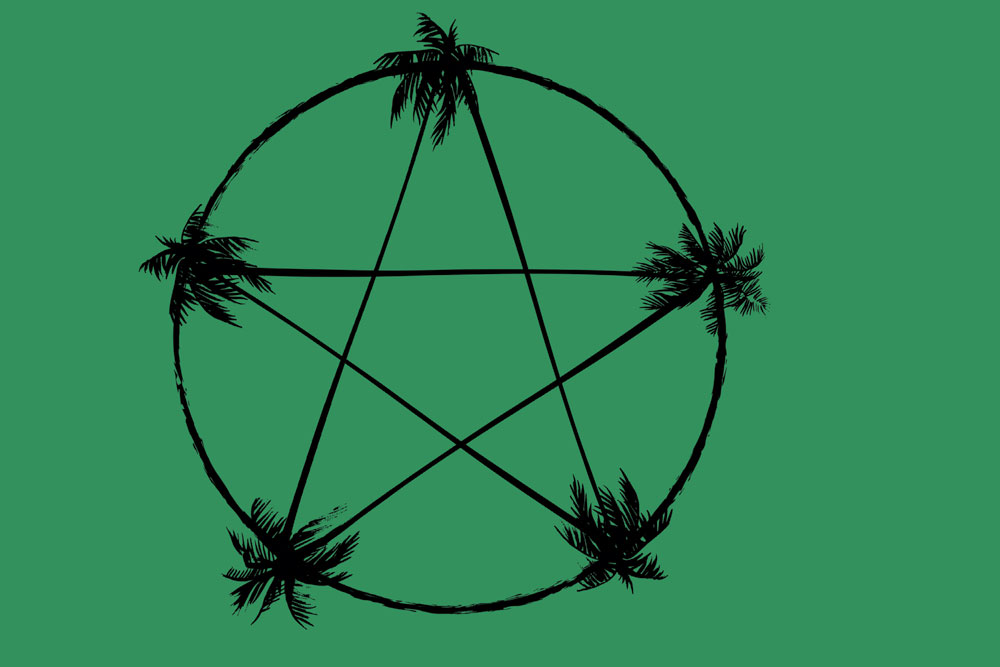 
ON FEBRUARY 25TH THIS year, 32-year- old Jamshath, a resident of Kotakkal in Kerala’s Mallappuram district, was almost smothered to death by her husband. “The next day of our housewarming he beat me so badly I was taken to hospital with severe injuries. He informed my mother that he had pronounced talaq and I was no more his wife,” she says. An exorcist he had been frequenting told him that she was responsible for the ‘ill omens’ in his life. Getting rid of her was the solution given to correct his life. Her marriage had been good enough in the beginning. Then her husband came under the influence of the godman and would take Jamshath along on his visits. The godman wanted women devotees to hug and kiss him. They were asked to sit on the floor near his chair and rub his feet. Jamshath refused to do it. When he tried to touch her, she walked out. It was this that made the godman command her husband to do away with her by either a divorce or finishing her off.

After her escape, she walked out of her home with their 10-year-old son. She now lives with her parents and works in a commercial establishment. “He had wanted me to cooperate with that exorcist who was a pervert,” says Jamshath, who is now fighting a legal battle to establish her matrimonial rights. However, there was no action against the godman despite her police complaint. “The police told me it was not possible to book him,” she says. The godman, meanwhile, goes on with his business uninterrupted across the state.

Jamshath’s account is one of the innumerable stories from the underbelly of black magic and exorcism prevalent in Kerala. Despite the state’s literacy, its history of rationalist movements and communist ideology, it doesn’t have a law banning black magic like Maharashtra and Karnataka. Rationalist organisations like Kerala Yukthivadi Sangham and Kerala Sastra Sahitya Parishad (KSSP) have prepared and sent draft bills to the previous Congress government years back without any success. It is only now that the present state government has decided to heed the long- pending demand to ban black magic and exorcism by law. But the draft bill prepared by the Kerala State Law Reforms Commission seems to be toothless. “In the current form, it appears to be one that protects superstitions instead of banning them,” says AP Muralidharan, president of KSSP. For example, there are exception clauses for religious rituals. “Any superstition and witchcraft can be attributed to religion and holy scriptures. They can avail the benefit of the exemption,” says U Kalanathan, one of the founders of Kerala Yukthivadi Samgham.

And while the bill might be ineffective in what it wants to do, resistance to it by conservative religious communities is going to be a headache for the government. For instance, the bill brings a ban on discriminating against menstruating women. A clause stipulates ‘involving in evil practices against women by forcing isolation, prohibiting re-entry into the village or facilitating segregation of menstruating postpartum women’ as a punishable offence. This might again find a similar resistance as the ban against women of menstruating age in Sabarimala that Kerala witnessed recently.

The bill punishes a range of activities usually termed witchcraft or black magic. Instilling the fear that one’s body is possessed by supernatural powers, assaulting a person under the pretext of expelling ghosts, killing of an animal or bird, prohibiting and preventing a person from taking medical treatment for any illness are some of the punishable acts specified. All such activities are widely practised across all religions at present.

Apart from sexual assault, Jamshath also had to deal with her husband’s unwillingness to vaccinate their son because the godman was against it. “I gave all periodical vaccinations to my son without the knowledge of my husband and his family,” she says. The practice of relying on magic for physical and mental diseases is endemic to all religions in Kerala. Kreupasanam is a perfect example. It is registered as a newspaper but its primary goal is not dissemination of information but performing miracles on devotees who buy and distribute the copies.


In the Bill’s present form, any exorcist activity can be exempted under the cover of religion

The Kreupasanam Marian Shrine located at Kalavoor in Alappuzha district looks like any another church but the difference begins once you enter. A devotee has to go to a counter adjacent to the gate and buy a bundle of the newspaper, which has about 25 copies. Further inside, there are separate counters for covenant prayers. This is an agreement to visit and offer prayers there for a fixed tenure. People come with a diverse range of requirements— from curing diseases, getting wealth, jobs, houses and even electric connections.

Father Joseph Valiyaveetil, founder-director of Kreupasanam, says 300 to 500 people visit the shrine daily to offer prayers. With each one of them buying at least one bundle, that adds to around 1,000 copies of the newspaper being sold in the church itself daily. The newspaper is published in five languages—English, Tamil, Kannada, Telugu and Malayalam. More than half of the newspaper is filled with the narrations of miracles experienced by devotees. Consider these examples:

– ‘My dad had a severe stroke. Doctors warned us that he would not live more than a day. We made a covenant prayer. He got up the next day and started talking’.

– ‘My sister was in coma from stage 4 cancer. We made a covenant prayer and I even witnessed Mother Mary near me while praying. She was completely cured after this.’

Many women we met at Kreupasanam had in common liquor or tobacco addiction of men in their family. One woman sought our help to fill the printed registration format for a covenant prayer. She wanted her husband to love and care for her. “I have two children. I got married ten years ago. He has stopped talking to me long back. I am not loved at all,” she said. Another couple had come from Thrissur to complete the covenant prayer they offered after losing their house in last year’s flood. A new house was built through a government project. The couple says the authorities provided compensation on time and reconstructed the house. But instead of good governance, the wife thought it was because of “the blessings of Kreupasanamand Mother Mary and nothing else.”

And yet when Father Joseph Valiyaveetil fell ill with viral fever, he got admitted to a private hospital. When asked why Kreupasanam could not cure his disease, he said, “I am a priest and I absorb the sins of people coming here seeking cure from diseases. They all become well but there is no one to absorb my sins. Hence I have to go to hospital and take medicines.” KSSP recently filed a complaint against Kreupasanam for promoting superstitions but it led to no action.

KS Zubair, a medical doctor who got his MBBS degree from Kozhikode Government Medical College and who claims to have been an office-bearer for the left-wing Students’ Federation of India, now runs a centre to cure people possessed by djinns, which he claims is the cause of many diseases. He is opposed to the anti-black magic bill. If asked to stop his practice, he plans to invoke his fundamental right to religion. “There are legal means to fight against the proposed bill,” he says.

That someone should be correlating djinns with diseases is not accepted by many devout Muslims also. “It has nothing to do with Islam,” says Jameela Alpatta, the vice-president of Muslim Girls and Women’s Movement (MGM), affiliated to the Mujahid faction in Kerala. She agrees that there is a reference about djinns in the Quran but doesn’t believe they have the capacity to possess human beings. She supports the bill. “Treatment practices like Dr Zubair’s should be banned. It is nothing but exploitation of superstitions,” she says.

The bill does contain provisions to curb it. Clause 10 says: ‘Prohibiting and preventing a person from taking medical treatment for any illness and instead giving him treatment like mantra-tantra or chanting prayers or such other things would be treated as a punishable offence.’ But the bill also has provisions to defeat itself. In its present form, any exorcist activity can be exempted under the cover of religion because the bill does not provide any definitions to exception terms like ‘Religion’ and ‘Spiritual’. “There are limitations, I agree,” says K Sasidharan Nair, the vice-chairman of the State Law Reforms Commission. “We don’t claim that this bill would put an end to all such practices. We cannot go against the fundamental rights of religious freedom guaranteed in the Constitution.”

Dr Manoj Komath, a rationalist activist and senior scientist at Sree Chitra Tirunal Institute for Medical Sciences & Technology, thinks the bill will not be of much use. He points to what he terms the conspicuous example of ‘Chathan Seva’, especially in the village of Peringottukara, in which kuttichathans or poltergeists are worshipped in temples. For a fee or an expensive pooja, it solves the problems of devotees. “Normally, almost all the established black magic and sorcery activities are claimed (or cleverly made) to be connected to some religious practice by the proponents themselves. This Chathan Seva is being claimed to be a legitimate Hindu religious activity. However, none of the Hindu scriptures endorse it,” says Komath. He argues that Section 15 of the bill permits all these activities.

Predominantly worshipped by backward-caste Hindus, chicken and liquor are the major offerings in the chathan temples. “Devotees used to offer arrack in the past. When it was banned, we allowed Indian Made Foreign Liquor. Either the devotees paid for it and we bought from the Beverages Corporation outlets or they themselves bring it,” says Sujith Lal, a trustee and priest of Kanadi Chathan Madom, one such temple. He argues that no code of law can close down the temple because of their fundamental right to practice religion.

The bill clearly says that vastu and astrology would not come under its purview and that ‘the advice in regard to vasthusastra, or advice by astrologers, unless such advice results in cheating, defrauding or exploiting any person’ is exempted. The ‘saint’ who made Jamshath’s life hell, the doctor who does djinn therapy, the newspaper that performs miracles, the Chathan Seva in temples can all claim for the exemption provisions in the bill.

The State Crime Records Bureau doesn’t have separate data of crimes related to exorcism but the rationalists give some indication. “Twenty-four people have been killed in 17 crimes since the last three years,” says U Kalanathan who meticulously collected media reports of crimes related to black magic since 2014. Every time there is a gruesome crime, there is the call for curbing black magic by law. In May this year, exorcism by a family in financial straits drove a mother and daughter to suicide in Neyyattinkara in Kerala. In August 2018, an exorcist and three members of his family were buried alive. The murders were done by his assistant who had been a loyal follower for years. However, no one practising black magic seems to be worried about the bill, confident that whatever they are doing would pass the test of being a religious faith, a confidence corroborated by the loopholes in the bill.