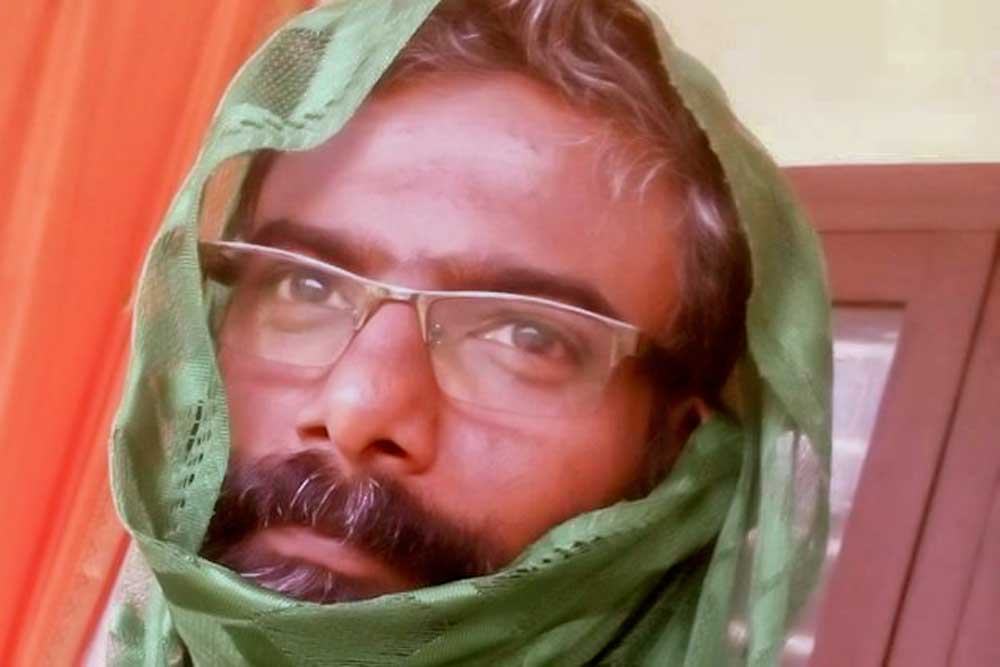 It seems that the Kerala Police is working overtime to implement the recent Supreme Court order on the National Anthem. After a series of arrests, the state police drive culminated with the detention of Malayalam writer Kamal C Chavara, who was charged under Section 124-A of the Indian Penal Code for showing disrespect to the Anthem. Kozhikode’s Nadakkavu police took the author into custody for interrogation before setting him free on the night of 18th December. He was later taken to a local medical college as he displayed signs of fatigue and weakness.

Chavara had posted a satirical piece that mimicked a primary school rhyme ridiculing the new judicial ruling, which makes it mandatory for people to stand up for the Anthem in cinema halls. Social media was full of demands for Chavara’s release.

“A society without a sense of humour is a bad sign,” says poet K Satchidanandan, adding, “Who is afraid of satire? Only the fascists. Right-wing forces are the ones insulting the National Anthem by using it as a tool of revenge against their political opponents.” Paul Zackaria, a Malayalam story writer and novelist, says, “The government is obliged to protect the constitutional rights of the people. The Chief Minister of Kerala should have control over the police, instead of letting them do whatever they want.”

There is a widely shared perception that the Kerala Police are soft on Hindutva forces and act promptly on their complaints while ignoring their offences. The recently concluded International Film Festival in Thiruvananthapuram was marked by a controversy over the arrest of people for the offence of not standing up for the Anthem. Some 11 filmgoers, including three journalists, were booked at the festival for failing to make the required show of respect. The Kerala Yuva Morcha, a youth wing of the BJP, had filed complaints against them.

The Anthem was played before the screening of each film at the festival, though there were 490 screenings in all over the course of a week, with many attendees sitting—and repeatedly having to stand—for several together. A delegate who watched six films had to pay his respect in this manner six times in a single day. Audience complaints of an ‘excessive display of honour’ to the Anthem were kept to whispers in fear of harassment by the police.

The state police appears confused, however, about how to legally proceed with such cases. The errant delegates were booked under Section 188 of the Criminal Procedure Code for disobedience of the order of a public servant, but the police are unsure if this Section is applicable. “Sitting silently without creating trouble for others during the National Anthem is not an offence to the best of my legal knowledge,” says Harish Vasudevan, a practicing lawyer in the Kerala High Court.

The law book does not specifically deem the act of sitting through the Anthem an offence. “The maximum that one could be charged with is the offence of Contempt of Court in the light of the recent verdict,” says Vasudevan. “Booking somebody under 124-A for ‘insulting national anthem’ prima facie sounds irrational.”

In Chavara’s case, meanwhile, according to Kollam district’s Police Commissioner Dr Satheesh Bino, the police are investigating allegations against the writer. “He was only detained as part of the procedure, an arrest could be made only if we are convinced that there is substance in the complaint,” he said. Facts are being verified, he added. When asked if this is not to be done only after an FIR is filed, the commissioner did not have a clear answer. “We proceeded on a complaint, we will act according to the facts of the case,” he said.

The police had taken an entirely different approach when a complaint was filed against Yuva Morcha activists for insulting the National Anthem. In yet another incident in Kodungallur, the members of this group also staged a protest in front of filmmaker Kamal’s house. Kamal is also Chairman of Chalachithra Academy. During the protest they sang the national anthem aloud. A complaint was lodged against them, accusing them of insulting the Anthem by using it as a tool for protest. “We verified the facts of this case. It is true that they sang National Anthem, but we could not make it an offence. It does not attract Section 3 of The Prevention of Insult to National Honor Act 1971,” said the Kodungallur police circle inspector. “That is the only statute under which a person can be booked for insulting the National Anthem.”

Supporters of the BJP and RSS have begun a social media campaign against the filmmaker, referring to him by his full name ‘Kamaluddeen’ drawing attention to his Muslim identity. On 19th December, the Kozhikode police took into custody Nadir KP, a 26-year-old filmmaker and journalist, on suspicion of his Maoist connections. Nadir is a friend of Chavara and had gone to hospital to meet him after he was picked up by the police. According to police, Nadir along with six other persons were charged under Sections 20, 16 and 38 of the Unlawful Activities (Prevention) Act, Sections 452, 143, 147, 148, 124-A (Sedition) and 506 of the Indian Penal Code (IPC) and Section 3 of the Arms Act. He was accused of intimidating Tribals in Aralam Farm in Kannur and for distributing a magazine that’s the mouthpiece of a Maoist armed squad.

Nadir, a popular figure in social media, has expressed opposition to Maoist ideology and activism in his past statements. He has also written a cover story for a prominent Malayalam magazine. He says he was in Kozhikkodu, his native district, on the day that the police allege he turned up ‘armed’ in the Tribal colony. He was however, released the next day. There has been huge protest against the police action on Nadir in social media.

VS Achuthanandan, the veteran communist and former Kerala Chief Minister, has condemned the police action and warned that the state is turning authoritarian. Chief Minister Vijayan, who also handles the Home portfolio, has maintained a steadied silence on the issue.