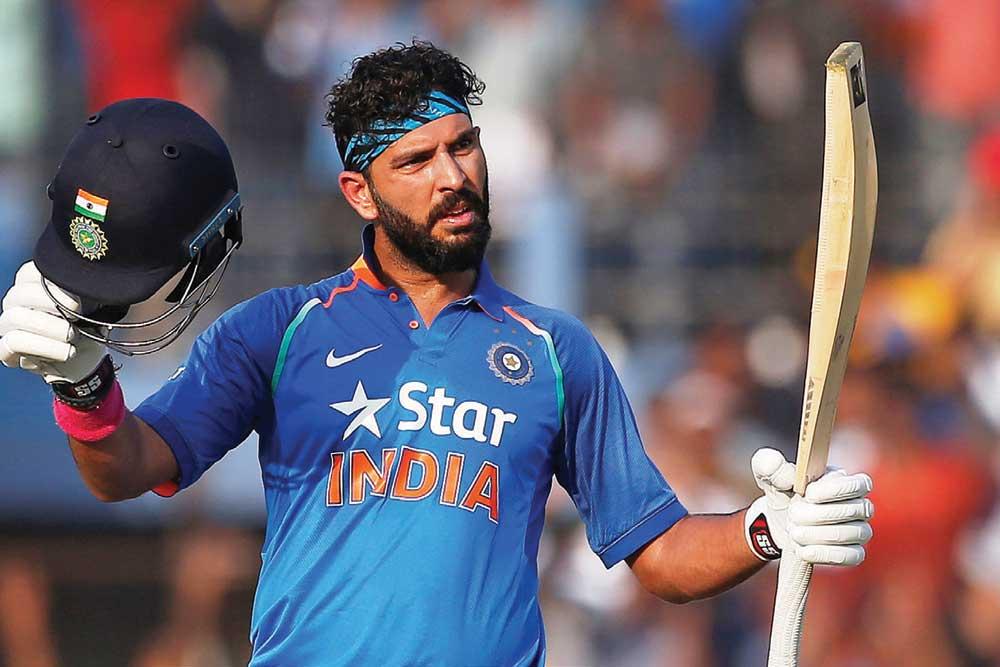 TO GAUGE A CRICKETER’S worth the first—and often the final— port of call is their career stats. Here are Yuvraj Singh’s: 304 ODIs, 8,701 runs, 14 centuries at an average of 36.55; 40 Tests, a paltry 1,900 runs, three centuries and an average of less than 34. Going by the old cricketing wisdom where a batting average around 40 is good, above 45 great, these are more so-so than wow, more Vinod Kambli-Ajay Jadeja than Tendulkar.d

Numbers may not lie but they can hide, cloak the spitfire and bite that enlivens the drama of sports. Using statistics to measure Singh’s career would be doing him and Indian cricket a disservice. Singh is the link between Sachin Tendulkar and Virat Kohli, and everything in the interim that happened in Indian cricket. He was its first brash, tough-talking superstar. Not passive and conservative like the cricketers in whose era he first broke in. He wanted everyone to watch him, from the way he lifted his bat to the way he prowled on the field. He took Indian cricket from the workman-like way it was played by genteel figures and made it cool. He struck the ball not just with timing, but with muscular, awe-inspiring strength. He was acrobatic, the first Indian cricketer (soon to be joined by Mohammad Kaif) to earn the epithet the ‘Indian Jonty Rhodes’. This at a time when one couldn’t imagine Indian cricketers ever diving—on the field or in a pool.

There is a difference in how cricket was played and watched in India in the 1990s and now. Then, it was played and watched on hope—and Tendulkar. Small grandmothers sat in front of TV sets, like the commercials showed then, clutching their prayer beads with trembling hands every time Tendulkar marked his stance. Now, one gets the distinct feeling players and viewers genuinely believe they are as good as, if not better than, their opponents. That bridge too, between the hope of the 90s and the self- belief of the near-2000s, was laid down by Singh.

He first appeared, right at the start of the new century, as though he were appointed by fate to shed Indian cricket’s baggage. The pall of the match-fixing saga still hung over the team and prominent players had been barred from the game. Singh was still a child then, only 18, part of a new- look team at the ICC Knock Out Trophy, when he first got to bat in his second match, against Australia. All the big names then—the Tendulkars, Gangulys and Dravids—were back in the dressing room without having made any impact, when Singh first walked in with an incomprehensible amount of swagger. Every Indian watching must have thought the match was going down like it almost embarrassingly always did. Everyone else in the team certainly seemed to be trying their best to do so. But Singh, without any visible self-consciousness or doubt, began taking down the best and meanest fast-bowling team of that generation with an insouciance never seen before. By the end of his innings, we could have been forgiven to think only a new star had been born. Almost 20 years later, we know he was also taking India towards something new and exciting.

He had his fair share of failures. But when he performed—and he always did on the big stages— he was spectacular. The lasting image of the 2011 World Cup might be Dhoni’s six to finish the match or the sense of destiny which surrounded Tendulkar as he was lifted over his mates’ shoulders. But without Singh, none of that would have happened.

His biggest fight though did not occur on the field. It occurred first in hospital whites and then in the whites of the training circuit, as he went through cancer treatment and then tried to return to the field. When he was back, he didn’t have the same touch or ability. But he did possess a big heart.

His stats aren’t remarkable. But as the public outpouring ever since he announced retirement shows, he was a sum of much more than his numbers.