You Are On My Seat 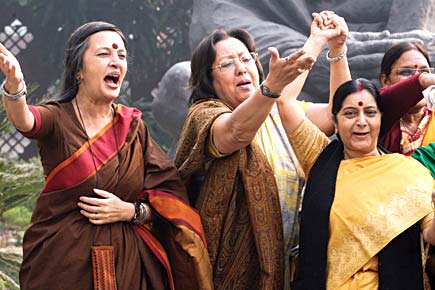 It’s so obvious. The Women’s Reservation Bill makes no sense at all. So, why is everybody silent?


Pardon me for being the dumb Indian male but this is what I can’t figure out: assuming you get 33 per cent women in Parliament election after election, what is it changing? I can understand reservations in college or school or offices or the IAS or the Tata group or Open magazine. That’s education or a job which will result in not having to hold the begging bowl before the master and husband. That makes sense, sort of. But Parliament? That’s the place where they pass all those laws , right? So, when these 33 per cent gang up, what new laws are they going to pass which will suddenly make this country a paradise for women?

Don’t we already have all these laws which protect women? The Dowry Prohibition Act was passed in 1961, and that’s not been such a roaring success, has it? We’ve got pretty good rape laws too, thanks to a feminist movement which was on the streets and not in Parliament. And is there any reason why this Parliament would not fall over itself to look after women? All those Congress MPs, the only pat they want on their white-kurta backs is of a woman called Sonia Gandhi, right? All she has to do is ask and they will be serial legislating for women. So, pardon me for asking again, how is women’s reservation in Parliament changing anything?

And, perhaps someone will also explain this to me: isn’t India like a whole bundle of marginalised, exploited groups? There are people below the poverty line, illiterates, farmers dying of starvation, a bewildering entanglement of castes, Muslims, Christians, Christian Dalits, the disabled, HIV patients, and…you get the point, right? Why not a 25 per cent reservation for people below the poverty line, or a 35 per cent quota for illiterates or a 20 per cent reservation for Muslims? Why women? I know the historical and social discrimination against them but this is India: you can’t turn without bumping into someone who’s not been screwed by caste, class, religion, gender, the state you were born in (think of Biharis in Mumbai) etcetera. If you had to reserve Parliament for every such entity, then there would be literal sharing of seats in Lok Sabha.

It is surprising the Women’s Reservation Bill is taken seriously at all. And how come the whole of urban, liberal India was clamouring for a creamy layer exclusion when the quotas had to do with Other Backward Castes, but they are not particularly worried about it in the case of the Women’s Reservation Bill? And why is it always complicating an issue when such questions are raised about the bill? I mean, it’s a complicated issue, right?