The Yeti: A Beast in Imagination 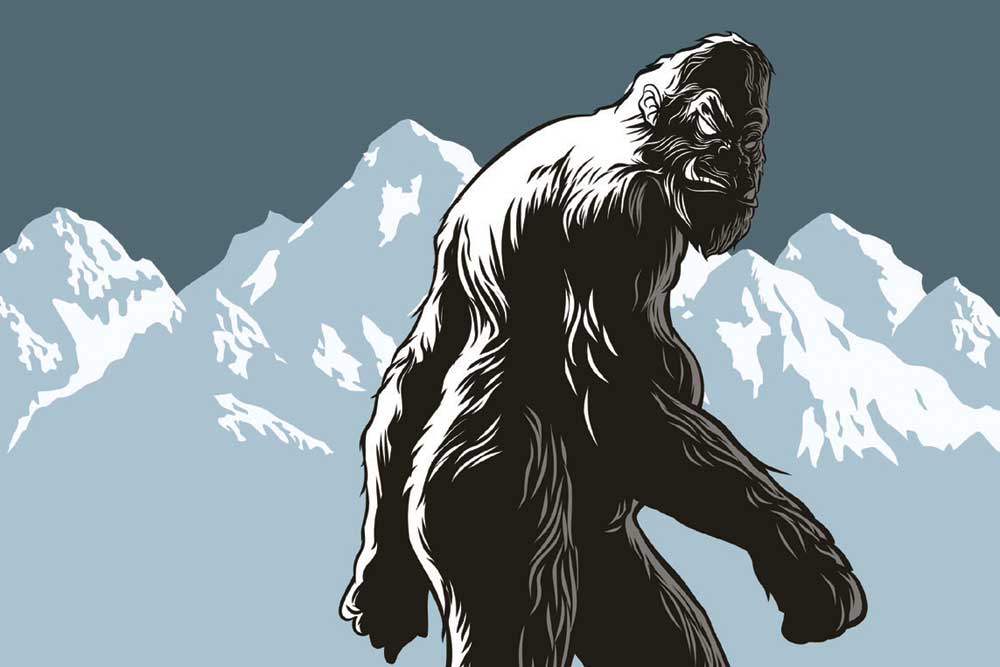 A YETI IS ALWAYS known in tangents—a miasma in the snow, a giant foot print, a memory of a memory. Man is always a little too late for a Yeti, never at quarters close enough to request a selfie. For good reason. Yetis don’t exist even if the Indian Army would have you believe otherwise. They are not alone. A large fraction of humanity chooses to believe in Yetis. But then they also believe in beings above the clouds managing us with thunderbolts in their hands. Or, existence of unicorns was not up for debate not very far back in time. Even now, the Loch Ness monster too has a following. North America has a Yeti of its own—they call it Bigfoot. Bigfoot too is man-shy, leaving only enough traces to keep its own legend alive.

On April 29th at 10:43 pm, the Indian Army’s Additional Directorate General of Public Information, tweeted, ‘For the first time, an #IndianArmyMoutaineering Expedition Team has sited Mysterious Footprints of mythical beast ‘Yeti’ measuring 32×15 inches close to Makalu Base Camp on 09 April 2019. This elusive snowman has only been sighted at Makalu-Barun National Park in the past.’ Note the absence of self-doubt about an entirely new species at least four times the size of man. They might as well have said, ‘We have discovered giants’, but no one would believe that. Public ridicule has done little to change the Army’s opinion. It now says when the members of the expedition team return, they will hand over the evidence to ‘subject matter experts’. Who are these experts holding a doctorate in Yeti behaviour? When the mountaineers do return to hand over the evidence, you can be certain it will be without further sightings. Yetis never come to the same person or group twice and that is because they don’t exist.

Look at the probability. The Yeti has been in Nepalese folklore for a long time. It didn’t take much to make the leap into the imagination of colonial rulers, making the Abominable Snowman a Western construct. Even Edmund Hillary went in search of it but Everest was far easier to conquer. Assume that the Yeti is real. How many are there? The more the numbers, the greater the odds of real human encounters and not just footprints. And if there are just a handful, then natural selection will have long done its job to efface them.

But the soldiers did see footprints. You can question their naiveté but there are photos for proof. Daniel Taylor, who obsessed about finding the Yeti ever since he was a teenager and then went in search of it, wrote a book a couple of years ago. His conclusion—the Yeti is a myth, and the signs that are taken to be its existence are made by an animal called the tree bear. In a National Geographic interview two years ago, he spoke of going into the Barun valley in Nepal where the Yeti is particularly active and its footprint had the peculiarity of also having a ‘thumb’. ‘Once I got in that valley I found footprints. I’d seen footprints before but these were fresh and I had no doubt I had found the Yeti.The question was, what made them? A local hunter I worked with said he thought what I’d found was a tree bear. I’d never heard of a tree bear in this region. Suddenly we had an explanation for where the thumb came from. A bear that lives in a tree forces an inner digit down so it can make an opposable grip. Normal bears cannot make an opposable grip. But if you’re spending a lot of time in the tree, you train that one thumb to grab a branch or break bamboo.’

After the Indian Army claim, the newspaper Mint got in touch with Taylor and he told them, ‘First of all, look at the size of the footprints. They’re saying it’s 35 inches. This is the size of a dinosaur. And we are quite sure dinosaurs don’t exist in the Makalu-Barun National Park. The most logical explanation is that it is almost certainly a Himalayan black bear (Ursusthibetanus), a very dangerous bear that lives at this altitude.’ Yeti or not, it was fortuitous the Army mountaineers only came across footprints and not the creature that made them.