×
Person of the week

The king of clay stays golden 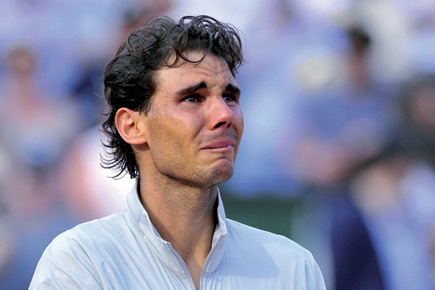 And then he said it. On the summit of his greatest ascent, Rafael Nadal, before taking the customary mock bite off his record 9th French Open cup this week, admitted that the end is near. Not just for him, but for the Big Four of the golden generation— Roger Federer, Novak Djokovic, Andy Murray and himself. It is perhaps for the first time any of the Big Four have spoken about it. When he won the French Open, Nadal had equalled Pete Sampras with 14 Grand Slam singles titles—bringing him to No 2, behind Federer who has 17 such titles. But what he said was not celebratory in tone: “I am 28, it’s not forever …I will have a few more opportunities but you don’t know if I will ever win it again. Our generation is on the way out. We have all been here for a long while. It’s normal. A generation is walking away and others will replace us. It will not come overnight, but it will come.”

The past is always more promising than the present. More so in sports, where people preach from barstools of the glorious days of yore; when the game was purer and tougher, when there were no distractions of showbiz and fame. How no cricketer will come close to Don Bradman and Gary Sobers, no boxer will equal the grit and showmanship of Muhammad Ali, no footballer can have the skill of Pele. These are, however, affectations of nostalgia. All these earlier mentioned greats would perhaps struggle with the demanding expectations of modern sports, where players are stronger and trained like soldiers.

Many tennis lovers, on the other hand, will agree that the present is as good a glorious period as the game has ever had. The beginning of this era saw the arrival of Nadal challenging Federer, who has been heralded through the decades as GOAT (Greatest of all Time). Later Djokovic and Murray brought additional excitement. They were aided by age catching up with Federer and Nadal’s periodic injuries. These four players have bedazzled a generation with their ability, fitness and character. Since the late noughties, they have blitzkrieged through every tournament, winning most major titles, and greedily keeping the top four rankings among themselves, reducing every other player to mere sideshows. Between them, those four men have won 39 of the last 44 majors stretching back to Federer’s first Wimbledon title in 2003. Suddenly it appeared there were four GOATs in the same generation. We have probably been living through tennis’s finest golden era. And now, as Nadal admitted, it is the comet’s tail-end.

Federer is 34 and many believe he is already way past his prime. Nadal is 28 and Djokovic and Murray are 27. In tennis, this marks the twilight end of the middle ages, while Federer is decidedly old. And the signs have been there. In 2013, Federer continued to plummet down the rankings, and he even exited the 2014 French Open in the fourth round. While the four have won a few tournaments here and there, they haven’t quite been able to dominate. Nadal, dogged by bad knees, was out for almost a year. When he returned, he faced a number of defeats, even on clay. And earlier this year, he lost the 2014 Australian Open to Stanislas Wawrinka. The Spaniard has been able to hold on to his No 1 ranking currently and he promises to return. He admits it will be tougher to win tournaments, and perhaps he never will again, but he is going to try. As Nadal attempts to chase down Federer’s record of most Grand Slam singles titles, and the other three seek their own individual glories, all we can do is savour their game and be glad to have witnessed the most glorious period in tennis history.