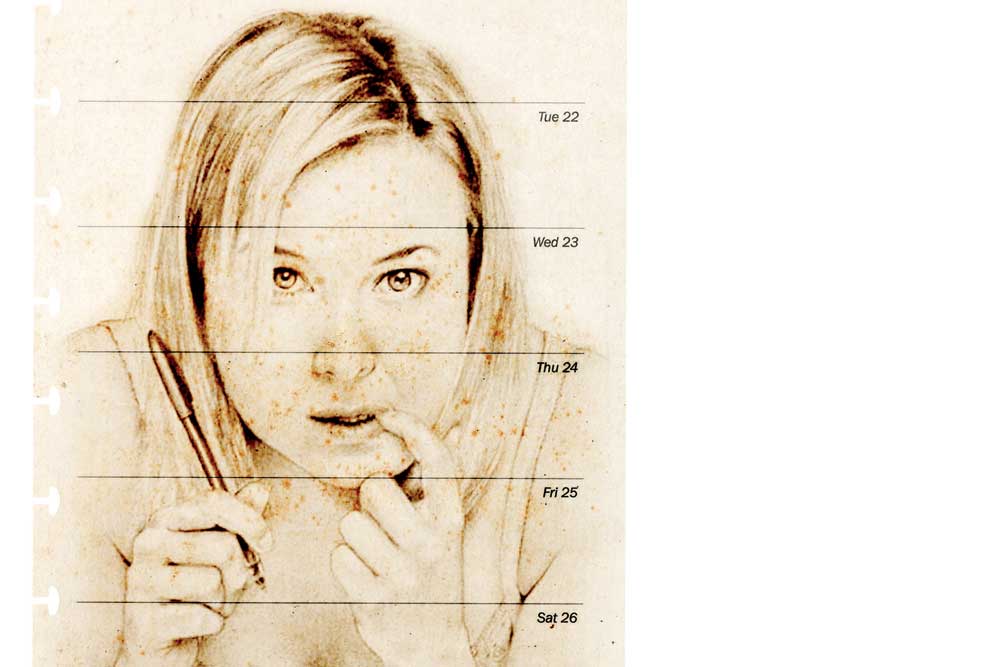 IT IS TOUGH not to like Bridget Jones. Here is a woman who loves fiercely, drinks rampantly, speaks freely and laughs loudest at herself. But it was this abandon of spirit that also scared away the men, or so she feared, as here she was a 30-something woman, without a significant other and few professional prospects. The 1996 novel Bridget Jones’s Diary by Helen Fielding sold over two million copies in a decade, spawned a film of the same name in 2001 and a sequel in 2004 (both starring Renée Zellweger). More importantly, it was also the harbinger of a movement. Today if chick lit is as legit as a dude in a tux, we have Bridget to thank for that. She gave legitimacy and currency to the opinionated interior monologue of a woman.

Twenty years ago a ‘verbally incontinent spinster’ was hardly considered the stuff of literature, let alone fantasies. Bridget proved that a woman could be lovely and loved, even if she served blue soup to friends, wore granny panties to smother her love handles and smoked packets of cigarettes slouched on the couch. She took the usual ‘feminine’ tropes and by turning them on their head, proved just how hollow they were. A woman didn’t need to know how to cook or blend to be a heroine. What was more important was the capacity of her heart and the wit of her repartee. (But if only she’d stop listening to that sodden song All by myself… don’t wanna be.)

Today when one watches Bridget Jones’s Diary, it seems as dated as Celine Dion. The 30-something unmarried woman (or man) is no longer the aberration at a dinner table, but is often the person with the most interesting stories to share and the envy of many. The constant jibes from ‘smug married couples’ and ‘concerned’ aunts and uncles about ‘time running out’ and ‘getting with the programme’ seem hackneyed and overdone.

The 30-something single woman (or man) is no longer the aberration at a dinner table, but is often the person with the most interesting stories to share

These scenarios in the movie seem outdated because they don’t reflect today’s realities of the West. ‘The Single American Woman’, a recent cover story in the New York Magazine reported that for the first time in US history, single women outnumbered the married. It noted that for women under 30, the likelihood of being married is astonishingly low.

In Hollywood, comedians and writers such as Amy Schumer and Mindy Kaling have given voice and muscle to this new kind of woman. A woman who makes her own rules, questions convention and relies on her ‘urban family’ rather than the bloke with a bank account. And in some small way, they have dear Bridget to thank for it all.

With Bridget Jones’s Baby, she is back in her third movie avatar, now in her early forties. And as the name suggests, she is having a baby. It also appears she is still single and knows not who the father is. Could it be the old favourite and dull Mark Darcy (Colin Firth) or the rakish and delish Jack (Patrick Dempsey)? Her cluelessness about the paternity of her child proves her life is still in a bit of a mess. But that is why we like her. Because that is how life is.