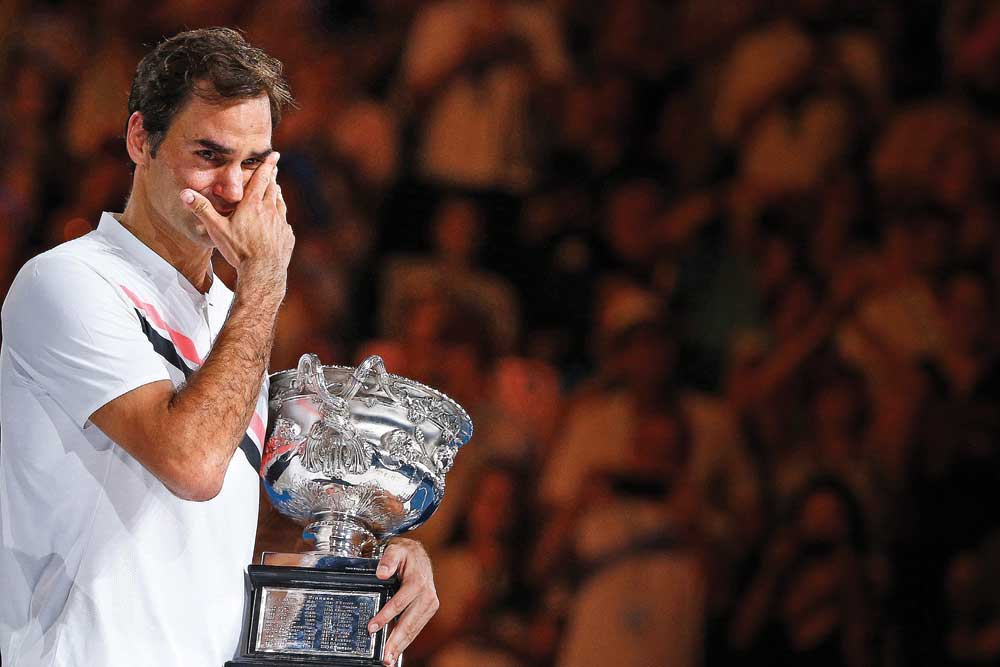 ROGER FEDERER IS welling up. And in a matter of moments, he is about to have an emotional breakdown. We know this because of history and precedence; in the 19 Grand Slams he has won before this one at the Australian Open earlier this week, Federer’s tears had told us just what the biggest trophies in tennis, and tennis itself, meant to him on each occasion. So why should No 20 be any different, especially given that no man had ever reached this figure before?

Following the Australian Open win last year—his least expected Slam win considering he hadn’t played competitive tennis for six months and was seeded a lowly 17th then — Federer wept immediately, on court and with his racquet veiling his face, after his great rival Rafael Nadal’s return shot flew wide off the singles court. A few months later, when he won Wimbledon for a record eighth time (No19 overall), Federer cried salty tears only on seeing his two sets of twins appear in the Royal Box just before the presentation ceremony.

On January 28th this year, Federer spoke through a lump in his throat and cried after the presentation. And immediately, in real-time, fans compared his post-win emotions with earlier ones. “Did this feel like your first win in Wimbledon?” Jim Courier, two-time Aussie Open champion and a registered Federer nut, asked the man of the moment in a TV studio. “No, man,” a laughing Federer replied. “This was a different emotional, clearly.” Of course it was; anyone who has invested the last two decades of their lives watching Federer’s every teardrop will tell you that.

In 2003, when Federer beat Mark Philippoussis to win his maiden Grand Slam trophy, Sue Barker, Wimbledon’s in-house presenter, plucked at his heart-strings until the 21-year old was a wreck. “You’ve had so much support from back home and the people here, what’s your message to them?” Barker had asked a visibly shaking Federer. “Oh yeah, people came from Basel and it’s so nice to share this moment,” he replied, choking. “So yeah, I just, I just want to say thanks to everybo…” And that was that.

“That first one was like, ‘Oh my God,’ you know, like I was able to win one, the rest now doesn’t really matter. I’m Wimbledon champion, I’m Grand Slam champion,” Federer explained to Courier in the studio. “This one here, tonight, reminded me more of the 2006 win I had here after I beat (Marcos) Baghdatis.” Six months shy of his 37th birthday, this win and these emotions reminded Federer of his 24-year old self—a Federer in the middle of a peak so wide that it was actually a ridge; a Federer who was then in the beginning of a run that saw him reach 10 consecutive Grand Slam finals, winning eight of them.

Back then, in 2006, Federer arrived at Grand Slams knowing that anything less than the trophy would be considered a tragedy by both him and his fans. During this period, Federer’s greatest competition wasn’t Nadal or Novak Djokovic or Andy Murray (boys who were still cutting their teeth in the sport), but Federer himself. Now, with Nadal, Djokovic and Murray waylaid by injuries (leg, elbow and hip, respectively), a 36-year old man has outlasted his much younger and far stronger rivals to once again reach a point where he fears only his own reflection.

The fact that Federer once again enters Grand Slams with the burden of being favourite—at an age when simply competing should’ve been the ultimate burden—tells you everything you need to know about his genius. And why he is, without a doubt, the greatest sportsperson the world has yet seen.

“I got to the final quickly on both occasions (against Marin Cilic this year and Baghdatis in 2006) and I had a lot of, um, emotions left,” he said. “I spent all day thinking of how cool it would be to win, and also what it would be like to lose after coming so close. So when it was all said and done, that’s when it hit me.”

Twelve years ago, on the same podium, Federer was presented with his second Australian Open trophy by Rod Laver, widely considered to be the greatest tennis player before Federer and a man Federer considers to be his ultimate hero. “I hope you know how much this means to me,” he had told Laver and the crowd then, quivering, before bursting into hot tears and walking away from the microphone to get a hold of himself, and Laver. “I guess it’s all coming out now.”

Twelve years later, at the Rod Laver Arena, with Rod Laver clicking smart-phone pictures of a trembling sixth-time Aussie Open champion, Federer combusted. Again, he stepped away from the mic, snivelling, even as Cilic, who had lost over five gruelling sets, smiled. “Did Laver really take pictures?” Federer asked a room full of reporters at the press conference. “I didn’t even see it happening through the thick tears.”

Composed now and perhaps even a little embarrassed, Federer hastily added: “It was what it was, you know, and I wish it wasn’t so sometimes. At the same time, I am happy I can show emotions and share it with the people. That does mean more than anything else to me.”