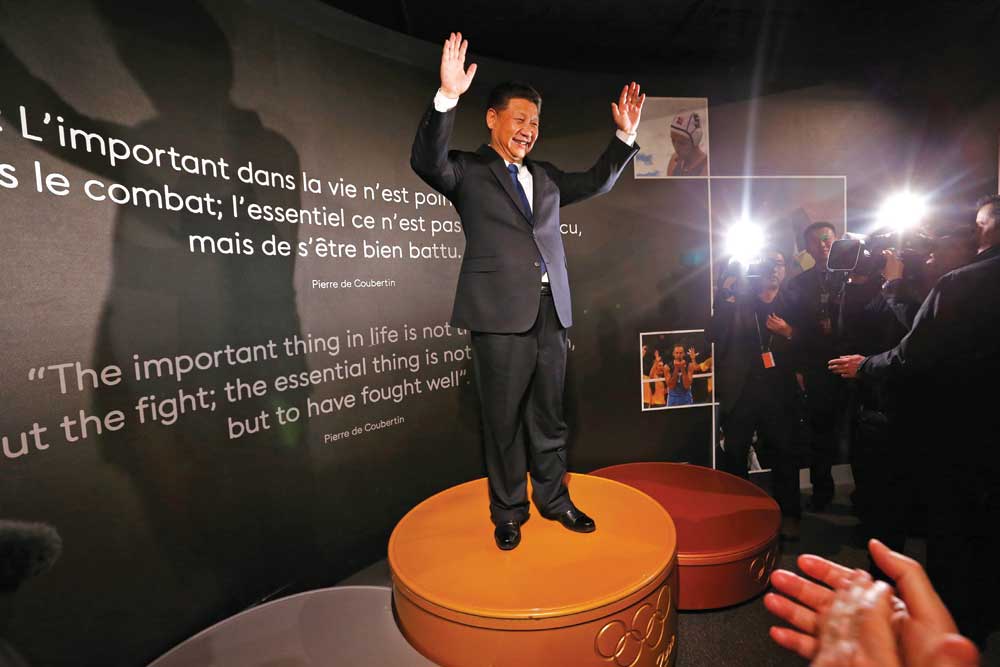 XI JINPING OF China is an ambitious leader and his drive to consolidate power within his country is reflective of Beijing’s global intentions and expansive agenda. It is therefore natural that the proposal to get rid of the 10-year cap on presidency, the passage of which in parliament is a foregone conclusion, has left Western political analysts, rulers, policymakers and local dissenters piqued. While most commentators have claimed ‘disquiet’ among the country’s elites and a large section of the public, Xi, for his part, hopes to endear himself to his people with the promise to make China the greatest, most powerful country in the world, a lofty goal that has the potential to detach the public from immediate worries and focus on potential gains. The state-sponsored media is expected to play up the critical role of the man and the need for him to bestow himself with more powers to take the Asian economic powerhouse—home to the world’s largest population in a single country—on its path to glory and pre-eminence.

For the international community, China’s infrastructure building- oriented foreign policy is a major cause for worry, especially the Belt and Road initiative and several others in Sri Lanka, Africa and elsewhere in India’s neighbourhood, as well as its aggression in the South China Sea where it keeps staking its claim on more islands. Huge debts that many poor countries owe to China in the long run could turn them into colonies of the nation. In its demeanour, China is a proto-Imperialist power, flexing its geopolitical muscle with the hope of surpassing the United States as an economic and military superpower.

In a country under the spell of Confucius, Marx, Mao and Deng, China has often adopted homegrown tactics in resolving its myriad contradictions— of nurturing capitalism in a society taught to hate the rich and industrialists; between economic liberalisation and political rigidity; governance and corruption, and so on. Xi’s intent in expanding the scope of his powers should therefore come as no surprise to any diligent China watcher. After all, he has displayed enough signs of vaulting ambition, especially in embarking on a nationwide clampdown on graft since 2012 that is known to have ‘disciplined’ more than a million party workers, including politburo standing committee members. The idea, however sober it may have looked, was also meant to obliterate factions around other powerful leaders. But then, corruption had been a rotten legacy of regimes that preceded his to the extent that officialdom was loathed by the public. And the scourge had to be tackled rather than tolerated.

The past five years also made Xi one of the most powerful leaders in China after Mao. He adopted multiple mantles, including that of the all-powerful general secretary of China’s Communist Party and chairman of its Central Military Commission. There are analysts who argue that in a middle-income yet prosperous country like China where there is no democracy, it is imperative that the ruler has sweeping powers to ensure that the political system remains cohesive. Their logic is that Xi, following his anti-corruption drive, has made enemies and the task upon him is bound to offend many people. Amassing more authority is a prerequisite for cleaning up a country that has seen a rapid rise in official corruption, especially over the past decade, they offer.

We have authoritarian rulers in several other countries of the world. Vladimir Putin and Recep Tayyip Erdog˘an are among them. But Xi has elevated himself to a different plane, that of a ‘paramount’ leader, an adjective once reserved for Deng. Though the privileged rich in China have raised eyebrows, as evident in several social-media posts, indications are that for the majority that craves a more prosperous and formidable China, the image of Xi as a strong leader has tremendous appeal.