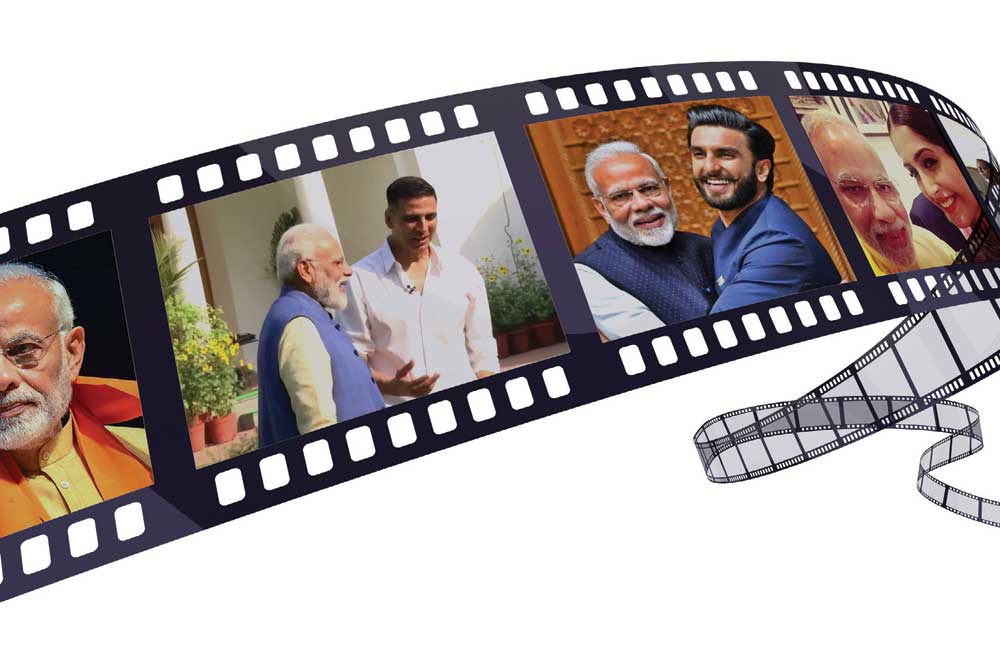 “HE IS A GREAT man, I have not seen this sort of development elsewhere.’’ That was Salman Khan in January 2014, while flying kites with then Gujarat Chief Minister Narendra Modi in Ahmedabad. A few months later, Salman was in the audience when that ‘great man’ was sworn in as Prime Minister. But in his new film, Bharat, which releases after the results of the General Election will be out, it is another Prime Minister who is front and centre. The trailer for Bharat begins with Jawaharlal Nehru’s ‘Tryst with Destiny’ speech and lingers for some time on visuals of his death in 1964, saying how “us waqt desh ki halat nazuk thi (the nation was at a delicate juncture).’’

For director Ali Abbas Zafar, who came of age politically and socially in the multicultural atmosphere of Kirori Mal College’s drama society, The Players, Bharat questions how far India has come and what it has become. In the journey of Bharat, a man with no surname, no caste and no religion, Zafar sees the possibility of a new idea of India. Yet, he hastens to add, the film is “non- political’’ and prefers to examine history with a “humane eye”.

He is not the only artiste in Bollywood who hesitates before speaking his mind on politics at a time when the right-wing is on the rise in the industry. Much as newly-independent India’s film industry which saw a healthy mix of left-wing poets and writers such as KA Abbas and Kaifi Azmi associated with Indian People’s Theatre Association, Bollywood is slowly aligning itself to a different, more conservative narrative. Its new conservative stars cover the spectrum—from the BJP Government’s undeclared poet laureate Prasoon Joshi who wrote Manikarnika to Kangana Ranaut who believes India has been ruled by foreigners till now, from the British, to Mughals to Italians; from Anupam Kher who routinely tweets his anger at the ‘intolerance brigade’ to Akshay Kumar who interviewed Prime Minister Modi in a charm offensive of dazzling proportions. These self-appointed ambassadors of the party in power are vocal about their adoration of Prime Minister Modi, ready to do anything to amplify his nationalist message, and in positions of immense influence within the film industry.

The left-liberals may not be in complete retreat in the industry but they are more circumspect than before, after the toxic reception that Shah Rukh Khan got in 2015 for speaking out about “extreme intolerance’’ in the country and the equally vicious response around the same time to Aamir Khan’s declaration that his wife had questioned whether it was safe for them to continue living in India. Privately Shah Rukh Khan has often laughed off suggestions that he be packed off to Pakistan (“why can’t they choose a first-world country for me to go?” he says) and Aamir has now restricted his political commentary to homilies about how there should be love, prosperity and progress in the country.

But the general response to them, two such powerful superstars, has shaken most of Bollywood, sending them scurrying to take selfies with the Prime Minister and dutifully doing as they are exhorted by him, whether it is to encourage people to vote or keeping India clean.

Yet, there are a few who still speak out. Take those who made an effort to appear in Vote Sambhal Ke, a public service advertisement shot by Satyen K Bordoloi. So there’s Kalki Koechlin saying “Vote Right, or vote Left, but vote with deliberation and purpose’’; Tigmanshu Dhulia asking young people to vote to save the nation and the Constitution; and Nandita Das demanding that people vote to defeat the politics of hate. There are others who have made it clear where their political sympathies lie. So Javed Akhtar and Shabana Azmi went to Begusarai in Bihar to campaign for former JNU student leader and CPI candidate Kanhaiya Kumar. Anurag Kashyap took on trolls on Twitter when he said ‘Koi bhi gaali Aaj search kar ke dekh lo twitter pe, dene waale jyadatar Chowkidar hi niklenge’. And Swara Bhasker, who is often slut-shamed for her liberal views which she wears proudly on her sleeve, continues to do as her conscience dictates, whether it is campaigning for Kanhaiya Kumar or appearing in the Vote Sambhal Ke video. Yet, ask Bhasker whether Bollywood has split down the middle along Left and Right and even she will hesitate before speaking out, saying she doesn’t want to get into a slugfest with the industry.

There is also a distinct religious chasm, a Hindu-Muslim fissure, in the industry which was unspoken for many years but is now being whispered about loudly. I remember a powerful film producer exulting to me once when Ranbir Kapoor looked like the next big superstar. “It’s about time we had a Hindu superstar in the industry, don’t you think,” she asked me. Ask anyone about this and they will pooh pooh it, trotting out clichés about how secular the film industry is.

But some, like sometime actor Payal Rohatgi, have no qualms in talking about what she calls Bollywood’s hidden “pro-Islamic” agenda. As she says: “I personally have no problem if any filmmaker or actor wants to promote any religion as it’s their personal choice but shaming Hindus and Hindu traditions is a complete no.” She goes on to give examples such as the movie PK which she claims shamed Hindu idols and says filmmakers such as Mahesh Bhatt sell “fake stories about Muslims being victims while promoting talent from Pakistan”. She also released a series of short films rubbishing those who appeared in the Vote Sambhal Ke videos.

Vivek Agnihotri has another perspective on this. The filmmaker who often gets into ugly spats on Twitter with “Urban Naxals”—his description of those who espouse liberal values— says there have always been strong political groups within the industry. If there were hardcore Communists such as Balraj Sahni and Bimal Roy, there was also the hyper-national original Mr Bharat, Manoj Kumar. During the Emergency, Dev Anand and Kishore Kumar were staunchly independent and suffered at the hands of the Congress establishment. But they co-existed with dedicated Congressmen like Sunil Dutt. Much later, Amitabh Bachchan became a Congress MP, while Dharmendra and Vinod Khanna joined the BJP.

But of late, he says, some young actors, directors and even film critics have started mixing their political ideology with their professional obligations. He points to a boycott of his new film The Tashkent Files by some film reviewers as an example. “Similarly, some young actresses refused to play the lead in my film because they thought associating with me will become a hurdle in their careers. Isolating me merely because I am anti-Left is a dangerous trend,” he says. Yet, he adds, there are a few who believe in peaceful co-existence despite different ideologies. “The Tashkent Files had Naseeruddin Shah and Mithun Chakraborty, both of whom have diametrically opposite views. Yet, we worked in absolute harmony. Similarly in my earlier film Buddha in a Traffic Jam, the lead star Arunoday Singh is the grandson of Arjun Singh, and I am absolutely anti-Congress. Yet, we worked well together.”

Whether the ideological rift can be closed or whether it will widen, the artist’s work will be political. As KA Abbas, the great progressive writer, would say before launching into one of his immense variety of works: “Mujhe kuch kehna hai (I have something to say)’’. In every age, there will be an audience if the art is effective. And as actor and director Nandita Das points out: ‘’Ultimately, the people working in films come from our society, which is becoming more right-leaning and divisive. So why are we expecting them to be any different? As far as many in the industry choosing to remain silent is concerned, it is a reflection of the fear that is spreading and forcing people to self-censor, out of a sense of perceived threat. Spaces for simply expressing a different point of view and to dissent are shrinking rapidly.’’ But just as fear begets fear, she adds, courage hopefully begets courage.