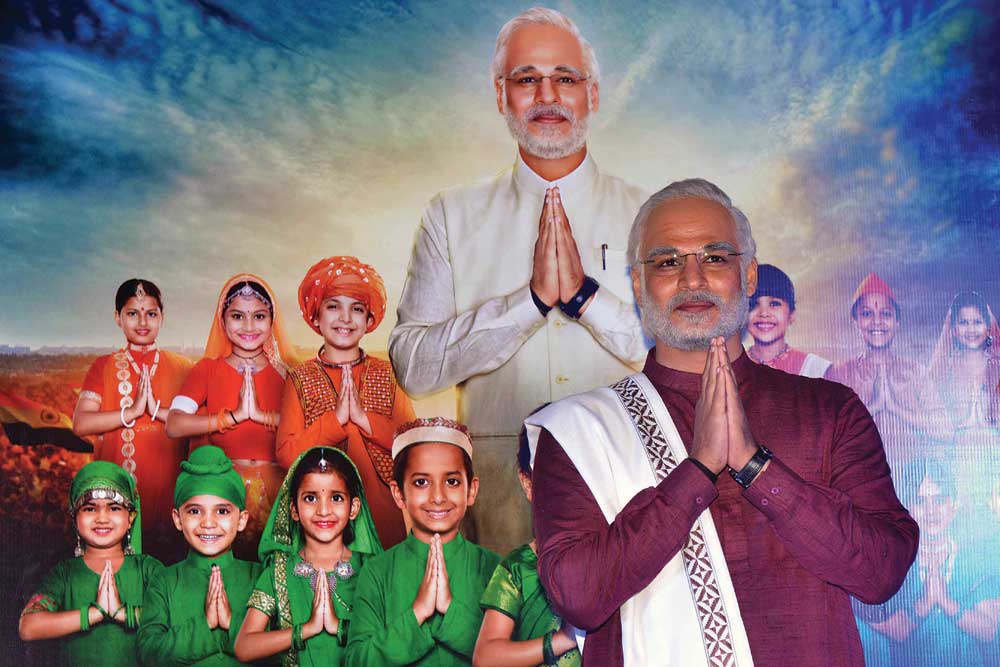 IT IS 1975, Ahmedabad, and Narendra Modi has just made khichdi with lauki, which he is about to eat with his political mentor Lakshmanrao Inamdar aka Vakil Sahab. Suddenly they get word that Emergency has been announced. What is that, wonders a fellow swayamsevak. ‘Naa Pakistan ke saath ladai, na akaal, na log raaste par hathiyaar lekar hai’ (There is no war with Pakistan, no famine, people are not out on the streets with their weapons ready to fire). Quickly Modi’s role in what Vakil says is India’s unfinished swatantrataa sangraam (freedom struggle) is established, underlined and juxtaposed with visuals of national leaders such as Nanaji Deshmukh, Morarji Desai and Raj Narayan being imprisoned. For good measure, newspapers are flashed, announcing Dev Anand’s harassment, ban on Gulzar’s Aandhi and Kishore Kumar being blacklisted.

Scenes from ErosNow’s web series, Modi: Journey of a Common Man, directed by Umesh Shukla, are just some that form the backdrop of General Election 2019. It’s been an unusually frenetic time for political films ever since The Accidental Prime Minister and Uri: The Surgical Strike landed on screens in January. While Aditya Dhar’s Uri caught the popular imagination with its deification of Modi and National Security Advisor Ajit Doval as Heroes No 1 and 2 against Pakistan’s Evil Unlimited, making a remarkable Rs 336 crore at the box office, Vijay Ratnakar Gutte’s The Accidental Prime Minister reinforced the message of the Congress being the party where dynasty is the default setting. Sonia Gandhi was shown as a woman who planted her loyalists in the PMO, among them Pulok Chatterji, principal secretary to the Prime Minister. She was quick to steal credit for her son from the hapless Manmohan Singh (played by Anupam Kher); was forever coldly offering the Prime Minister tea instead of relieving him of his misery by accepting his resignation; and refused to allow Rahul Gandhi to take over the party at a time it was so ‘tainted by scams’. The parivaar (family) was shown to be bigger than the party and just in case anyone had doubts about the film’s mission, it ended with a real- life cut to Prime Minister Narendra Modi saying, “Yeh ma-bete ki sarkar to gayi” (This government of mother and son is gone). For all its pains and Kher’s relentless publicity blitz, the movie, with a budget of Rs 30 crore, made a modest Rs 31 crore.

“It’s one thing to make political biopics which are convenient for the establishment and another to make political cinema that speaks truth to power. We aren’t there yet,” says filmmaker Hansal Mehta. Bollywood’s sudden discovery of political cinema is a happy marriage of good business and convenient politics. The Akshay Kumar model of cause cinema has been good for his bank balance and his image. Movies such as Toilet Ek Prem Katha (2017) and Padman (2018) show star power can sell issues close to this Government’s heart, while also erasing memories of some of Akshay Kumar’s embarrassing comedies. Other stars, sidelined and side-swept, are also using Prime Minister Modi to reinvent themselves. In Omung Kumar’s PM Narendra Modi, Vivek Oberoi, reduced to playing villains after a brilliant debut in Company (2002), plays Modi as he laments his Gujarat burning during the 2002 riots and his nation not being nationalist enough. For good measure, it ends with the fictional Modi issuing a threat to Pakistan: ‘Main chetaavni deta hoon, tumne hamaara balidaan dekha hai, badla bhi dekhoge’ (I am warning you. You’ve seen our sacrifice, not our vengeance). Like Shukla’s mini-series, it also eulogises the role of the Rashtriya Swayamsevak Sangh, being not merely a ‘sangathan’ but a ‘sena’.

With Bollywood’s finest meeting Modi in January to cement their ‘nation-building role’ with a group selfie, the coyness Indian filmmakers have had about politics may finally be at an end

Kindness to a right-wing political entity at a time when right-wing is on the rise is clearly more agreeable than investing in a movie such as Ashvin Kumar’s No Fathers in Kashmir (2019), which ran into trouble with the Central Board of Film Certification for its depiction of the Indian Army’s activities in the state. Some filmmakers believe there is a new millennial audience which has been bred on a diet of political theatre on news television every night and is now keen to rewrite the historical narrative. Filmmaker Vivek Agnihotri is one of them. “People make movies on the lives of famous people. I became obsessed with the death of Lal Bahadur Shastri.” He filed as many as 20 petitions under the Right to Information Act but says he was stonewalled by the establishment. His movie, The Tashkent Files, was ready in March 2018 but no one wanted to release it, until Agnihotri went to Zee TV founder Subhash Chandra who decided to embrace it. The first fundamental right is to truth in any mature democracy, says Agnihotri, and “I will exercise it”. His quest in the film: to uncover whether Shastri’s death was a heart attack, or a state-sponsored murder.

Sunlight is the best disinfectant and if the Congress’ lack of reaction to The Accidental Prime Minister is anything to go by, it is a lesson it has finally learnt. In not protesting against the movie, it gave sanction to an indelible truth—in the age of streaming, seamless entertainment, very little can be hidden. Despite the Congress’ valiant attempts to stall movies based on the Lady Edwina Mountbatten-Jawaharlal Nehru relationship, most recently a version that was to be directed by Joe Wright and based on Alex Von Tunzelmann’s Indian Summer: The Secret History of the End of an Empire, there is enough out there, fact and fiction, on the two. Most recently, Netflix’s The Crown portrayed the closeness between Edwina and Nehru when the fictional Mountbatten tells the Queen, in reference to Prince Philip: ‘You married a wild spirit—we both did. Trying to tame them is no use.’ How will the Congress party approach Rupesh Paul’s forthcoming My Name is RaGa, which chronicles, sympathetically even if tackily, Rahul Gandhi’s journey from troubled teen to an unprepared politician to duty-bound dynast?

With Bollywood’s finest meeting Prime Minister Modi in January to cement their ‘nation-building role’ with a group selfie, the coyness Indian filmmakers have had about politics may finally be at an end. Umesh Shukla, the director of the Modi web series, believes the Prime Minister is a combination of Swami Vivekananda and Sardar Vallabhbhai Patel, and gushes about how he fell in love with his subject during production. Sandip Ssingh, the producer of PM Narendra Modi, is equally clear about his admiration for the Prime Minister: “I only want the right leader,” he says. “This is the time for India to be put on the world map. One can’t have personal choices.”

But Prime Minister Modi is not the only recipient in Bollywood’s sudden love-fest with political biopics. Thackeray, written by Shiv Sena MP Sanjay Raut, tried its best to humanise and lionise Bal Thackeray. Ditto with the NTR biopic, directed by Krish Jagarlamudi in two parts, with Ram Gopal Varma and Agasthya Manju making Lakshmi’s NTR to spice things up. But the biopic, though well acted by NTR’s son, Nandamuri Balakrishna, failed at the box office, doing nothing for the popularity of the son-in-law, N Chandrababu Naidu.

No doubt the Jayalalithaa-inspired mini-series directed by Gautham Menon, and two biopics, one starring Kangana Ranaut and the other Nithya Menen, will be kind to Tamil Nadu’s ‘Booty Queen’ just as Mani Ratnam’s Iruvar (1997) had to be careful of not hurting the sensibilities of fans of both MG Ramachandran and MK Karunanidhi and his Bombay (1995) had to be pre-screened by Thackeray who wanted to vet how he was projected during the Mumbai riots of 1992-93.

Over 70 years on, the jury is still out on whether Leni Riefenstahl’s Nazi-commissioned Triumph of the Will (1935) and Olympia (1938) are pure propaganda or impure art. What is true though is that they are an invaluable record of the era she lived through. Will Bollywood’s newly minted nationalists achieve even a fraction of that?