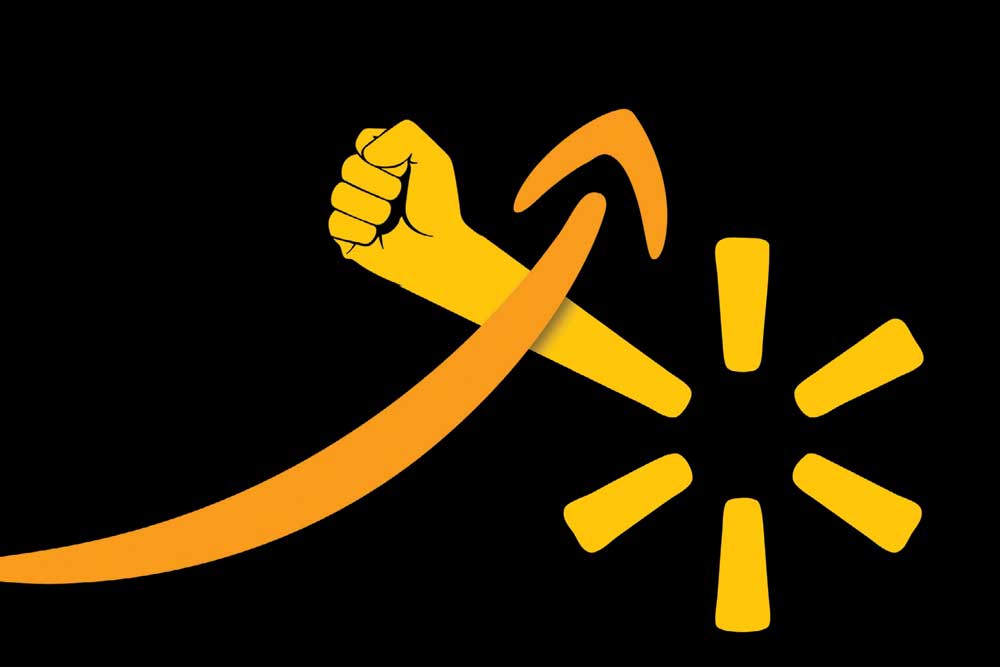 JUST A YEAR-and-a-half ago, Sachin Bansal, the founder of Flipkart, was railing against unfair competition from foreign companies. He obviously meant Amazon, whose pockets seemed to be so unendingly deep that they could keep pouring in thousands of crores while his own company scoured around for capital infusion. Flipkart is the largest e-commerce player in India but Amazon was steadily catching up until it was a matter of time that they would draw level. Even then Bansal’s argument had sounded hollow because Flipkart itself was shored up by foreign investors, which included Softbank, Microsoft, eBay, Tiger Global, Qatar Investment Authority and so on. But you could say that there was at least a distinction between foreign investment and ownership. That changed this week when Walmart picked up a majority stake in Flipkart.

It didn’t come cheap. Walmart will pay over $16 billion for 77 per cent of Flipkart. This might include a stake that Alphabet, the company that owns Google, is said to be interested in. Sachin Bansal is said to exiting, about Rs 7,000 crore richer. But his co-founder Binny Bansal, who is also the group CEO, is hanging on along with the current management. Ostensibly, therefore, very little will change in the way Flipkart’s operations are run. On the other hand, it is still somewhat unclear what Walmart’s grand vision is with such an acquisition. You don’t pay Rs 100,000 crore just to let things be as they are.

Analysts who track the sector have pointed out that the way Walmart runs its business is entirely different from the world of e-commerce that Amazon has captured. Walmart is a brick-and- mortar play, which forces its suppliers to sell goods at bare minimum profits, savings which are then passed on to customers even while it earns on vast volumes. Flipkart and Amazon, on the other hand, have been paying out of their own pockets to build customer loyalty, hoping that at some point they will start making money. But until such time, both are making enormous losses in India. Walmart knew that Flipkart would be a cash-guzzling machine when it bought it and so why go against its own business wisdom?

Because Walmart has seen how disruptive Amazon has been to its traditional retail business and attempts at taking on Amazon on its own turf have failed. Flipkart offers it a ready agency in online retail. Walmart has cash to bring in to keep Flipkart competitive in India, and at some point, this could be a launchpad for its global e-commerce ambitions. Plus, it can also help make headway in India’s regular retail space. As of now, regulations prevent it operating with freedom, but the backend of Flipkart will be of great help if and when the sector is liberalised. A PTI report says that the day after the deal, Walmart announced that in the next five years it was going to open 50 wholesale cash-and-carry stores, where FDI rules permit it to operate at present. ‘At its 21 Best Price wholesale stores, Walmart sells everything from fast-moving consumer goods to furniture to other retailers and institutions. It could potentially use these Best Price stores as pickup and delivery points to service online sales made on Flipkart,’ says the report.

Between Amazon and Walmart, they will end up with much of the Indian e-commerce market. PayTM, which is gradually entering this space and has the Chinese giant Alibaba backing it, might be a possible third player. But the rest of the pack are going to find it difficult to survive. They just don’t have the resources to match these global behemoths. For the Indian consumer, it is going to be very good. At present almost everything is cheaper on Amazon and Flipkart, and they also are much more customer-oriented. Returning an air-conditioner bought online is far easier than if you had bought it in a store. The sole reason more Indians don’t shop online is that they have not become acquainted with it, but this will change. The market is huge, a reason why Walmart is betting on huge short term losses eventually paying off. An Economic Times article with some numbers on the potential of the market, says, ‘India’s total consumption is expected to rise to $3.6 trillion in 2027 from $1.3 trillion in 2016, according to industry data. The retail market is expected to hit $1.8 trillion from $650 billion in 2016. Of this, the biggest driver is expected to be food and grocery, pegged at $1.1 trillion in 2027 from $420 billion in 2016, which will drive a separate and similarly substantial investment by Walmart in agriculture.’

Another fallout of the deal will be Amazon ramping up its focus on India. It tried and failed to acquire Flipkart when the Walmart negotiations were on, but competition doesn’t faze it. Ironically, when Jeff Bezos founded Amazon, one his inspirations in being relentlessly customer-centric was Sam Walton, the founder of Walmart. A biography of Bezos, The Everything Store, noted that Bezos ‘wove the Walmart founder’s credo about frugality and a “bias for action” into the cultural fabric of Amazon’. When the two companies battle it out in India, the customer here is going to be the one certain winner.