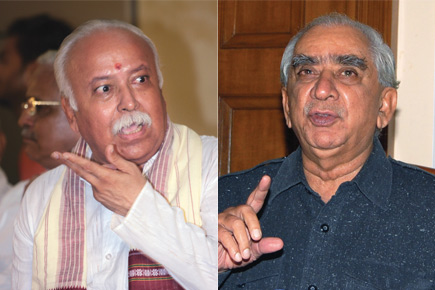 Of course, the Rashtriya Swayamsewak Sangh (RSS) is a cultural organisation that doesn’t interfere in the internal matters of the Bharatiya Janata Party (BJP).


Of course, the Rashtriya Swayamsewak Sangh (RSS) is a cultural organisation that doesn’t interfere in the internal matters of the Bharatiya Janata Party (BJP). Only, its leaders can’t stop themselves from making public statements about the BJP’s internal affairs. The RSS’s prodigy and BJP’s president Nitin Gadkari might have fed ladoos to Jaswant Singh when he returned to the party last month, but Big Brother finds it unpalatable.

RSS leader and ideologue MG Vaidya has lashed out at the BJP for accepting Singh back into the party without an apology for praising Pakistan’s founder Mohammed Ali Jinnah. ‘Why not Govindacharya, Uma Bharti and Sanjay Joshi? They might have made some mistakes but it was not as serious as that of praising Jinnah,’ Vaidya has written in the Marathi newspaper Tarun Bharat. Keeping Jaswant Singh out, he contends, wouldn’t damage the BJP, but bringing back Bharti, Govindacharya and Joshi would certainly strengthen it.

Last year, RSS Chief Mohan Bhagwat camped in Delhi and met with the BJP leadership to choose a new party president, his Nagpur crony Nitin Gadkari. In public, the RSS had nothing to do with the BJP’s internal matters. It just wanted a younger leader.