Asaram: The Fall of a Guru 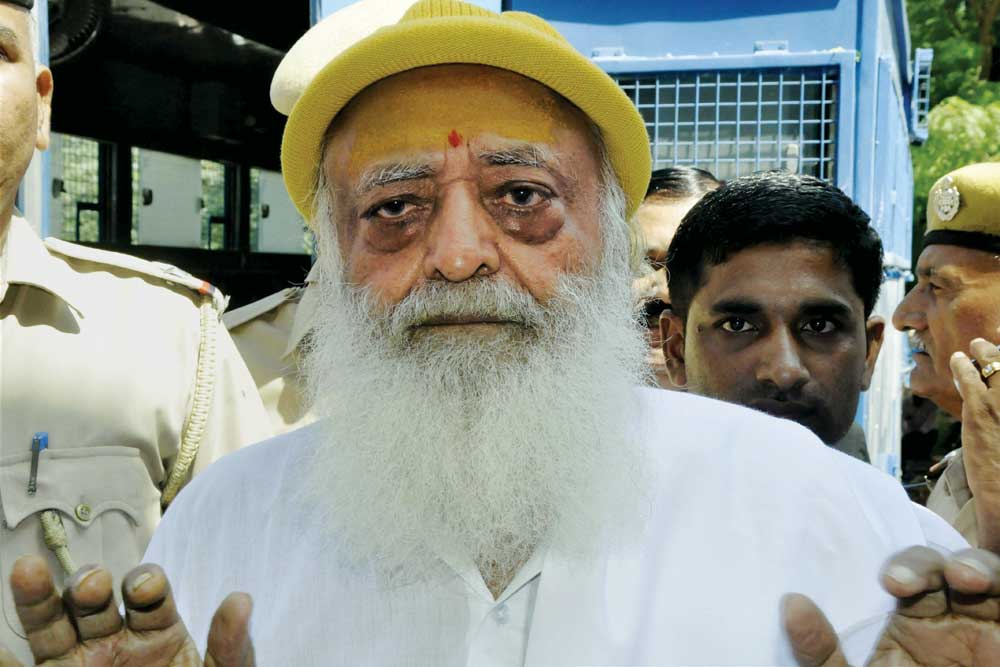 THE EVOLUTION OF law in civilisation has two major milestones. One is the idea of a formal law itself as a necessity for the orderly functioning of human affairs. The second is the concept that everyone is equal before it. It took thousands of years before the latter met up with the former, but in reality we are still some distance away from a society where practice meets principle. Upper castes and classes still fare better in the judicial system. The elites who hold the threads of the country still easily get away with serious crimes. The sentencing of Asaram Bapu after being convicted of rape, however, is a gratifying reminder that the wind is shifting slowly in the right direction, at least when it comes to godmen.

Contrast Asaram with another godman, Sathya Sai Baba. His spiritual abilities were exposed on camera as clumsy tricks befitting a street magician. He had been accused of child abuse and the BBC did a documentary which had victims and their families talking about it. There was also a case where four men who tried to attack him in his ashram were shot dead by the police under suspicious circumstances , not something you associate with a saint. But despite the murkiness that trailed him, he passed away in 2011 after enjoying extraordinary popularity, protected and nurtured by policemen and politicians.

Asaram being held guilty comes on the heels of another godman, Gurmeet Ram Rahim Singh, head of the Dera Sacha Sauda, being convicted and sent to jail in a rape case. The violence his followers unleashed only made it more difficult for his supporters among politicians to protect him. Asaram too belongs to a similar category of criminals who hit upon a formula that would have made him invincible in an India of a few decades ago, where a mere combination of popularity and spiritualism was a licence to commit any crime ranging from rape to land grab to murder.

The crime for which Asaram has been convicted is the rape of a 16-year-old. Her parents, residents of Shahjahanpur, UP, had been ardent followers of Asaram and had helped in setting up his ashram there. Having taken her to him in his Jodhpur ashram to heal an ailment, they had been outside the room during the rape. As The Caravan had reported in an investigative story on the case, ‘When the girl came out after approximately an hour, her father said, “she was crying and looked disturbed.” The parents asked her what was wrong, but she only asked them to take her back home to Shahjahanpur, which they did the next morning. Only once they got home did the girl give her mother an account of what had happened to her inside the hut. She, in turn, told her husband. “He made her drink a glass of milk and then started sexually assaulting her,” the father said. “He tried to force himself on my daughter but she resisted.” The charge sheet in the case contains more disturbing details of what Asaram allegedly did. It states that the godman took off his clothes and forced the child to perform oral sex on him, and kissed her body and hugged her even as she cried and resisted. It also states that he intimidated the girl by threatening to kill her parents and family members if she dared to speak to anyone of what he had done to her.’

Even after the family filed a police case, their ordeal would go on, with relentless threats issued by Asaram’s supporters. They refused to be terrorised into silence. That a case had been registered against Asaram emboldened two sisters from Surat, Gujarat, to come out and file cases of rape against Asaram and his son Narayan Sai. Despite hitmen killing witnesses and top lawyers like Ram Jethmalani representing Asaram, he still couldn’t walk free.

There are a few reasons why Asaram, like Gurmeet Ram Rahim, found that he was not beyond the law. One is the role of television, which ironically gave them a reach that earlier godmen didn’t have, but also brought home the nature of their crimes to all those millions who were not his followers. Another factor was that there is no tolerance for sexual crimes after the Nirbhaya rape case, especially once it makes headlines. Asaram faced charges under The Protection of Children from Sexual Offences Act (POCSO Act), a stringent law passed in 2012 that ensured he was behind bars without bail for the entire duration of the trial. While his followers still tried to scuttle the case, it would have been far worse if he had been able to use his network and influence directly.

Politicians were also wary of coming in his support despite their closeness to him. YouTube is replete with videos of Asaram with leaders of every party. Politicians and godmen have a mutually parasitical relationship where one bolsters the fortunes of the other. There is still an appeal process left and given his thousands of crores and vast following, it is almost certain that there will be more chapters in this story. But the idea that powerful godmen have no free pass for crime is a silver lining in a bleak landscape.