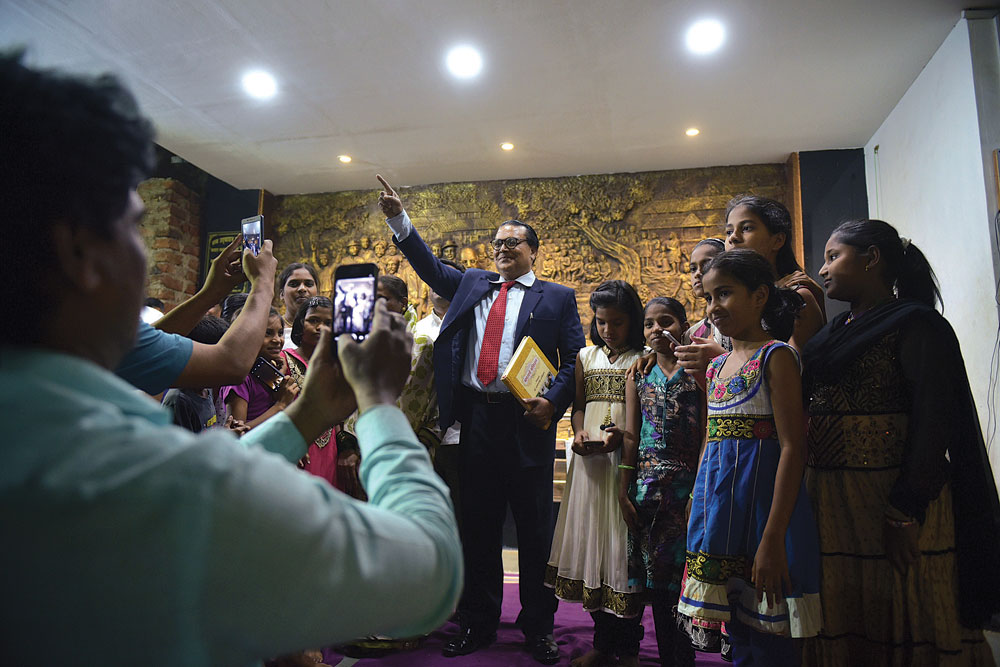 GULABRAO OVHAL IS easy to miss in a crowd—a conventional pot belly, thinning hair and spectacles. Only when he steps on to the stage, with his hair gelled back, in a suit whose shirt collar overlaps the jacket’s, does the startling resemblance to Babasaheb Ambedkar become apparent. The story goes like this. On a Sunday morning in 1995, Ovhal’s razor slipped and he nicked a portion of his moustache. His younger son insisted he shave off the rest of it to save him embarrassment at Century Enka, the factory where he worked. He also remarked that if only Ovhal had a blazer and round-framed glasses, he would probably pass off for a photocopy of Ambedkar.

Off went the duo to a photo studio, after borrowing glassless round-framed spectacles from an optometrist. Dressed in a blue blazer that might have been worn by many men of his town, the studio photographer was probably the first to document the transformation of a commoner into Ambedkar. On their way home, minus the blazer and the glasses, Ovhal was stopped by his neighbour’s mother, an 80-year-old woman, who remarked, “Surprisingly, today I can see Bhim in you.”

Since then, over the last nine years, Ovhal has been performing an hour-long one-act play, Pragnyasurya, where he narrates a compressed version of Ambedkar’s life, struggles and penning of the Indian Constitution. Every year, in the days before and leading up to Ambedkar’s birth and death anniversaries, Ovhal is flooded with invitations to perform—from local associations across Maharashtra, politicians, schools and colleges. He refuses no one and there are days, like his current schedule for Ambedkar’s 125th centenary, where he has over nine performances scheduled in and around Pune.

When he was five years old, Ovhal remembers waiting for hours to fill water from the pump close by; of watching a game of cricket seated on the steps of the Hanuman mandir, when a boy of a higher caste kicked him from behind to send him rolling down. Much later, like other Dalits, he took up Buddhism without paying attention to what Ambedkar had preached.

After the shaving incident, Ovhal began reading books on Ambedkar and was struck most by the leader’s plea to his followers that his deeksha shouldn’t go waste; that they must rise and continue to spread his message. The following year, Ovhal participated in Ambedkar’s anniversary celebrations in Pune. He went to a barber shop near the venue of the festivities, changed into his cheaply-tailored suit and round spectacles, and, armed with a copy of the Constitution in Marathi, led his village contingent to grand applause.

Ovhal started getting invited to events and political rallies as an entertainment fixture. Once, a stranger mocked him by asking if he did anything else besides parodying Ambedkar by standing around in crowded places pointing skywards. The hurt of the remark began to heal only when Ovhal performed a play on Ambedkar’s life at the village square back in his village, Bhosri, in 2007. It was a sketchy performance, he concedes, but it began his transformation—from a mill worker to Ambedkar’s lookalike and eventually, to his messenger. When his factory offered an early retirement option, Ovhal leapt at it. He devoted all his time to perfecting his one-act play.

Even now, political parties invite him to inaugurate public landmarks, or just stand around while people request him to keep pointing skywards so that they can take selfies. Ovhal doesn’t like it much, but it helps generate awareness and he gets more invitations to perform his play. One of his most memorable performances of being Ambedkar is a gig he did for just two families in a small hamlet near Koyna Dam. After a wretched journey on a state transport bus, followed by a three-on-a bike ride and a long walk under the April sun, he took to the stage erected for him. Built of dung cakes, it had no loudspeakers, and he later got to savour a home-cooked meal under the stars.

Back home, his grandchildren yell ‘Baba’, when they come across a photo or footage of Ambedkar on Lord Buddha TV, the household’s most-watched channel. Ovhal also runs a modest travel agency that specialises in Buddhist tours, wherein he takes people to some of the holiest places associated with Buddhism.

On Monday morning, 11 April, after yet another riveting performance at an event in a slum in Bhosri, his dyed hair is no longer slung back. He is dialling the number of the organiser of an event, and begins by saying, “Mi Ambedkar boltoy” (I’m Ambedkar speaking). The man on the other end recognises him at once and they exchange notes on the time and place of the next performance. An address is being noted down by Shravni, his granddaughter, while Ovhal says to the organiser, “This year, it is the 125th, hence all the noise. What about the next and the years after?” They laugh as Ovhal hangs up. His wife enters the room with a cup of tea and takes a good look at the mess around. “Please finish your calls quickly; I need you to bring me a few things from the market.”