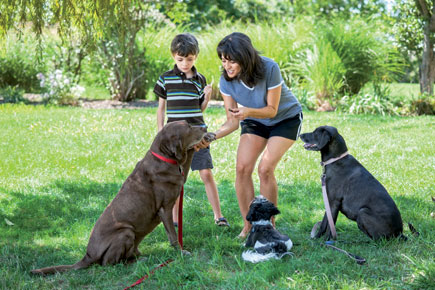 According to one theory, the modern mutt’s ancestors, the wolves, started living around ancient human settlements to eat leftover food. Over the years, the wolves developed a close relationship with humans and evolved into modern dogs. But why are dogs so emotionally attached to their owners?

According to a new study, the answer could be the so-called ‘love hormone’ oxytocin. This hormone, which is produced by all mammals, is known to increase trust in humans, and help mothers and babies develop a strong bond, the researchers claim, also makes dogs develop close attachments to humans.

The study was conducted by researchers from Monash University in Australia and published in the science journal Animal Cognition. The researchers associated with this study claim that the production of oxytocin in dogs enables them to better read human social clues like, for instance, pointing, and helps them become the perfect human companion. Dogs are known to outperform wolves in understanding human cues.

For the research, 75 dogs were studied for over 12 months. The dogs were encouraged via hand signals to find a food treat hidden in one of two bowls. They were given a nasal spray of oxytocin and later a nasal spray containing only saline water. After both occasions they were tested to see if this had an impact on their ability to follow human cues.

It was found that after receiving the oxytocin spray, dogs performed much better and this performance boost lasted for up to 15 days after the spray was given. According to the researchers, this shows how oxytocin played a key role in the domestication of dogs. They write in the journal, ‘It has been postulated that the neuropeptide, oxytocin, is involved in human– dog bonding. This may explain why dogs, compared to wolves, are such good performers on object choice tasks, which test their ability to attend to, and use, human social cues in order to find hidden food treats. The objective of this study was to investigate the effect of intranasal oxytocin administration, which is known to increase social cognition in humans, on domestic dogs’ ability to perform such a task.’