Heavy rainfall in the state has led to the deaths of at least 71 individuals, 59 of them in Chennai alone 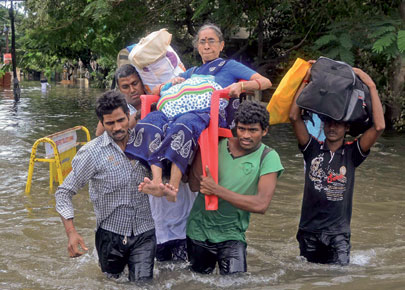 Much of life in Chennai and several other parts of Tamil Nadu came to a standstill because of heavy, incessant rains this week. Over 70 people are believed to have died because of rain-related accidents in the state, most of them in Chennai. These have ranged from incidents of drowning and building collapses to electrocution.

More than 10,000 were evacuated from their homes in Chennai, with offices and educational institutes shut for several days, and trains and buses diverted or cancelled. Military and paramilitary forces were pressed in for rescue and relief efforts in the state and military helicopters were used to drop food and drinking water to the worst-hit areas. Chennai alone received 85.5 millimetres of rain from 8:30 am to 6 pm on 15 November, the day of the heaviest downpour, according to the Met department. Meteorologists say that a depression formed over the Bay of Bengal has set off heavy rains in the coastal areas of Tamil Nadu and Sri Lanka.

The Tamil Nadu government has come under severe criticism for being underprepared. But the state’s Chief Minister J Jayalalithaa, who has announced a Rs 500-crore relief fund for flood-affected areas, claimed in a report broadcast by BBC: “The rain that was meant to be spread out over the monsoon months has poured in just a few days.”

With the rains having abated now, there is now the fear of water-borne diseases spreading. Newspapers have reported that this fear is especially high among those who have taken shelter in relief camps.