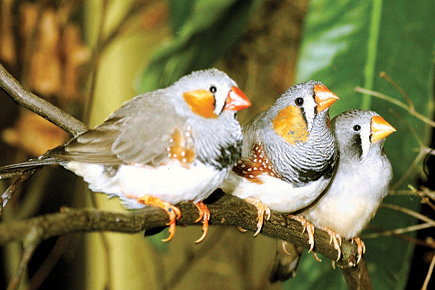 
Is language innate to us, hardwired in the brain, or is it entirely a cultural artifact? Recent work by scientists at Cold Spring Harbour Laboratory (CSHL) and the City College of New York (CCNY) has given a hint in a research paper in Nature.

The question they set out to answer in their own words was, ‘During infancy, each of us emerges from a delightful, but largely incoherent, babble of syllables and learns to speak—normally, in the language of those who care for us. But imagine what would happen if we were somehow raised in utter isolation from other people… Would we learn to speak? Would such a language evolve over multiple generations? If so, would it eventually resemble existing ones?’

Obviously, the scientists who posed this question could hardly answer it by studying humans; instead, they focused on the bird song of the zebra finch.

According to Olga Feher, who conducted the experiment for her dissertation at CCNY, first generation male zebra finches raised in isolation produced an unstructured, often abnormal-sounding song that was quite different from the ‘wild-type’ song of birds in the forest. These birds were paired in a ‘tutor-pupil’ relationship with a new generation of zebra finches that imitated their tutors’ songs, but changed certain characteristics. The alterations accumulated over generations. By the fourth generation, the song had evolved toward the ‘wild-type’ song.

If the analogy of bird songs can be applied to humans, then it seems that a certain structure of language exists in our genes, but it expresses itself only through cultural learning.

“What is remarkable about this result is that even though we started out with an isolated bird that had never heard the wild-type, cultured song, that’s what we ended up with after generations,” explains Partha Mitra, an alumnus of Presidency College, Kolkata, who now works at CSHL. “So in a sense, the cultured song was already there in the genome of the bird. It just took multiple generations for it to be shaped and come about.”