New findings on how the statues were constructed and coloured 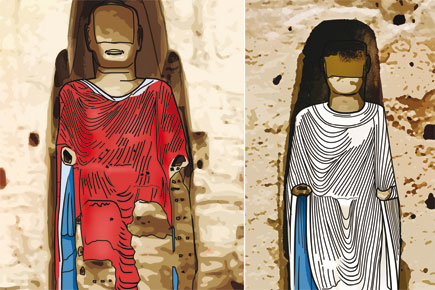 New findings on how the statues were constructed and coloured


Foreshadowing the 9/11 attack on the World Trade Center, in February 2001 the Taliban dynamited Afghanistan’s Bamiyan Buddhas. Over the past two years, Unesco experts from Europe and Japan have been examining the fragments of the two statues at the Technische Universitaet Muenchen (TUM). Their work has already revealed details of the statues that substantiate what we know from historical records. Dating techniques have shown that the taller 55 metre Buddha designated male and later called Salsal (‘the light illuminating the universe’) by locals was constructed between 591 and 644 AD, while the other 38 metre Buddha designated as female in local lore (of course, both were male figures) and called Shamama (Queen Mother), was built earlier between 544 and 595 AD. According to a university press release, researchers have also found that earlier chronicles were correct in their description of the colours that once adorned the statues. “The Buddhas once had an intensely colourful appearance,” says Erwin Emmerling, whose team discovered that before the conversion of the region to Islam, the statues were overpainted several times, presumably because the colours had faded. The outer robes, or sangati, were painted dark blue on the inside, and pink, and later bright orange, on top. In a later phase, the larger Buddha was painted red and the smaller white, while the interior of the robes was repainted in a paler blue. The graphic reconstruction undertaken by the TUM researchers confirms ancient traditions: sources as far back as the 11th century speak of one red Buddha and one moon-white. The other parts of the figures may possibly have had a white priming coat, but that can no longer be proven beyond doubt. Researchers also found that while ‘the statues themselves were hewn out of the cliff’, ‘the flowing garments were formed by craftsmen using clay, which was applied in two or three layers’. “The surfaces are perfectly smooth—of a quality otherwise only found in fired materials such as porcelain,” says Emmerling.