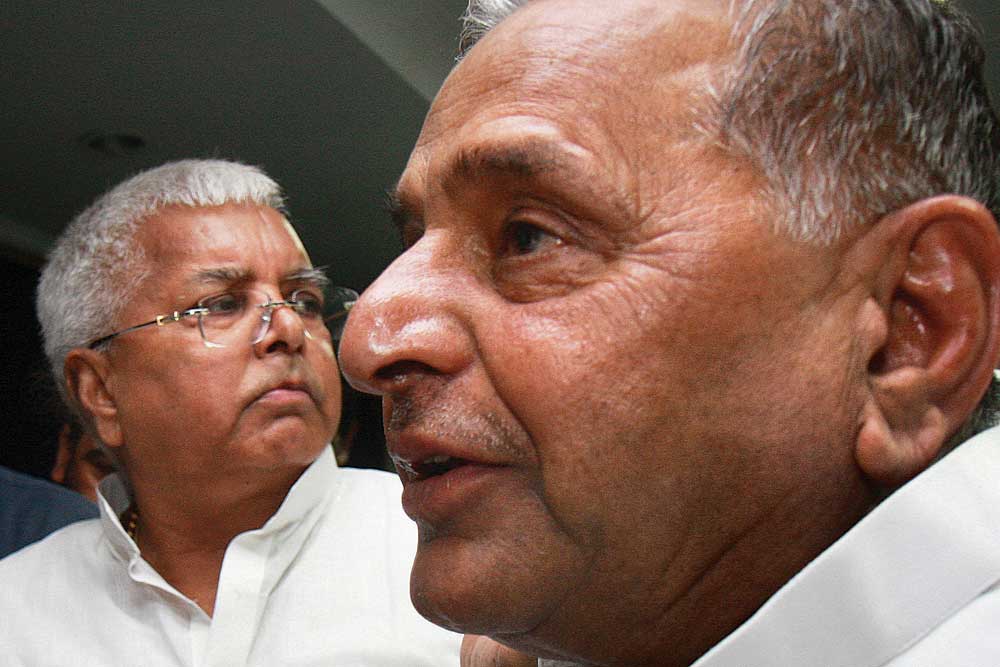 
ALONG A PAVED HIGHWAY in western Uttar Pradesh’s Badaun, the newly-opened Singh’s Haveli restaurant stood out like an oasis in a desert. It was late afternoon, but food— a typical Punjabi fare cooked in ghee—was still being served. Elections were just three days away and the sizzler on the table was politics. One just had to stoke it. Between serving hot tandoori rotis and dal, Brajesh and Bijendra praised the work—over bridge, roads and educational institutions—done by Samajwadi Party’s two-time MP from the seat Dharmendra Yadav, party leader Mulayam Singh Yadav’s nephew. However, Bijendra said there was a wave in “support for Modi”. He had no idea who the BJP’s candidate was. That did not matter, he said. Brajesh, an SP supporter, was concerned that the Muslim vote was getting divided between Yadav and Congress’ Salim Shervani, who was a four-time SP MP from the seat till 2004.

For the first time since 1997, the SP lost Badaun, a Rohilkhand seat with a large chunk of Ahir (Yadavs in the Hindi belt) and Muslim population. Brajesh was right. Yadav lost to BJP’s Sanghmitra Maurya, a non-Yadav OBC, by a margin of 18,454 votes. Shervani got 51,947 votes. While Yadav’s vote share dropped by 2.91 per cent from 2014, BJP’s increased by 14.9 per cent. Yadav had managed to retain the seat in the 2014 Modi wave, when BJP swept the state with 71 seats.

In the tempest of 2019, the SP vote bank lay scattered, torn by the SP-BSP tie-up, the family feud and yet another Modi wave. The Yadav family itself lost three of its turfs. Former Chief Minister Akhilesh Yadav’s wife Dimple Yadav lost in Kannauj, a family pocket borough with around 3.5 lakh Yadavs, to BJP’s Brahmin candidate Subrat Pathak, by a margin of 12,353 votes. The seat, first won in 1967 by socialist Ram Manohar Lohia, was later held by his protégé Mulayam Singh Yadav and then his son Akhilesh Yadav and daughter-in-law Dimple Yadav. The discord in the Yadav family reverberated in Firozabad, where Mulayam’s younger brother and Akhilesh’s estranged uncle Shivpal Yadav was taking on nephew Akshay Yadav. Both the Yadavs lost while the BJP’s Chandra Sen Jadon, a Thakur, cashed in on the duel and wrested the seat by a margin of 28,781 votes. Only Akhilesh Yadav, with a comfortable margin of 2,59,874 votes, and Mulayam Singh, with his lowest ever margin of 94,389, won the seats they fought—Azamgarh, an eastern UP constituency, and Mainpuri, another family bastion, which the party patriarch had won in 1996 and then thrice later. The other seats not only slipped through the fingers of the Yadav family but went to BJP candidates, none of whom were Yadavs.

Out of every six Yadavs in the state, two voted for BJP, according to a study conducted by the Centre for the Study of Society and Politics, Kanpur. This meant 33 per cent Yadavs voted for BJP, as against 21 per cent in 2014, and 6 per cent in 2009. The gradual erosion of the Yadav affinity to the SP, nibbling slowly at the seams, has come as an ominous warning for the party that it can no longer bank on narrow caste politics alone. “It’s too early to say this politics is finished forever. But it has certainly taken a backseat,” says the Centre’s director, AK Verma.

Traditionally a pastoral community claiming to be descendants of Krishna, the Yadavs’ clout in the political landscape of Uttar Pradesh and Bihar since the 1990s was led by Mulayam Singh Yadav and Lalu Prasad—whose beginnings in statecraft were rooted in anti-Congressism. The quota agitation, to implement recommendations of the Mandal Commission to reserve jobs for Other Backward Classes (OBCs), had lent further political muscle to the two Yadav leaders. They came from humble backgrounds, were self-made, directly connected with the people and built a constituency.

This was the first Lok Sabha election their parties fought under the leadership of the sons— Akhilesh Yadav in UP and Tejashwi Yadav in Bihar. In 2012, at the age of 38, Akhilesh became the youngest chief minister of Uttar Pradesh, when his 72-year-old father passed on the legacy to him. But since then Akhilesh is yet to prove his political mettle given the SP’s performance in the 2014 Lok Sabha elections, when the party managed to hold on to just the Yadav family’s five seats, in the 2017 Assembly elections when he lost the state to a resurgent BJP, and in the 2019 General Election when the SP won just five of the 37 seats it fought in an alliance with Mayawati’s Bahujan Samaj Party (BSP). In Bihar, where Lalu, serving his jail sentence in Jharkhand on fodder scam cases, left it to his second son, 30-year-old Tejashwi Yadav, to take the lead, the RJD failed to win any of the 19 seats it contested. The party drew a blank for the first time since 1997 when RJD was floated, but more or less held on to its vote share. Lalu’s daughter Misa Bharti herself lost the Pataliputra seat by a margin of around 40,000 votes to BJP MP Ram Kripal Yadav, a former aide of her father. This Yadav family too had its share of family squabbles, with his elder son Tej Pratap Yadav and daughter apparently seeking a larger share in the political hierarchy.

The Yadav leaders failed to offer to its vote banks a promise that could go beyond the hackneyed caste affiliations. Their voters were uncertain who the Mahagathbandhan’s face would be in Delhi, if at all the BJP was defeated. They doubted that the alliance leaders would even have a role to play in national politics. Modi, on the other hand, had cast a wider net with the slogan of nationalism, amplified after the Balakot air strikes, which appealed to the majority, cutting across caste lines.

Akhilesh Yadav’s promise of an Ahir Regiment, in an effort to consolidate the Yadav vote, alienated the other backward groups from the SP

POLITICAL PUNDITS WILL have to decipher the mathematics of vote transfer and the lack of it, a possible backlash of a past bitterness between Dalits and Yadavs. When the Mulayam Singh Yadav government came to power in 1993, it was supported by BSP, which withdrew support in 15 months. It left a lot of bad blood. Four months into SP rule in 2012, the BSP had alleged a rise in atrocities, particularly against Dalits. “The SP-BSP alliance would have caused unease. At the grassroots, there is an economic and social conflict between the land-owning Yadavs and Dalits, who are land labourers. The Yadavs considered themselves a dominant caste,” says Verma.

The optics of Mayawati blessing Dimple Yadav, who touched her feet, mitigated doubts about the sustenance of the alliance, but may have not gone down well with their voters. The SP had relied on caste mathematics, tying up with its former political foe BSP, besides Ajit Singh’s RLD, banking on the Yadav, Jatav, Jat and Muslim vote. Together, this is estimated to account for 39 per cent of the population. What they did not factor in was that among the OBCs, the Most Backward Classes (MBCs), wary of the Yadavs, would again like in 2014, turn to BJP, which gave tickets to 19 candidates from around 10 such groups, including Kurmis, Rajbhars and Nishad. Among the non-Jatav Dalits, the BJP gave 13 tickets. Akhilesh’s promise of an Ahir regiment, in an effort to consolidate the Yadav vote, further alienated the other backward groups from the SP.

Samajwadi Party leader Ram Gopal Yadav insists that the BJP had polarised the votes on the basis of castes, saying its choice of candidates was based on caste. The BJP had given 28 tickets to its upper caste support base of Brahmins and Rajputs. According to him, in seats the SP had done well last time the voting had fallen by 10 per cent-15 per cent leading to a loss of votes. “Nobody wins on the basis of just one community. Nothing is permanent in politics. Situations change. There may come a time when we get the BJP votes,” he says.

In Bihar, where Nitish Kumar’s Janata Dal (United) and BJP combine wrested 39 of the 40 seats, Congress won from Kishanganj, a Muslim-dominated constituency along the West Bengal border. The RJD, which fought on 19 seats, less than half the total, got a vote share of 15 per cent. With Lalu, the unparalleled leader of the Yadavs despite his conviction in scams, away in jail, it now depends on whether his son Tejashwi can fill the vacuum. The Lalu brand has been losing its sheen in Lok Sabha, dropping from 22 seats in the 2004 Lok Sabha elections to four in 2009, weakening the leader’s bargaining power at the Centre where he supported the Congress-led UPA. He won just four again in 2014. Like in UP, the BJP made inroads into non-Yadav OBC vote banks, proclaiming that it was striving for inclusive politics, trouncing the Yadav- Muslim arithmetic. In 2014, BJP wrested 22 seats and a vote share of 29.4 per cent, in what seemed to have blurred caste equations. In terms of vote share, the RJD came second with 20.1 per cent.

In Bihar, where Lalu left it to his second son Tejashwi Yadav to take the lead, the RJD failed to win any of the 19 seats it contested

But Lalu bounced back in the Assembly polls of 2015, stitching up an alliance with Nitish Kumar’s Janata Dal-United, bringing the OBCs, Kurmi-Koeris, EBCs, Dalits and the Muslims under one umbrella. Of the 243 Assembly constituencies, the RJD won 80 seats (18.8 per cent), JD (U) 71 seats (17.3 per cent), BJP 53 seats (25 per cent) and Congress 27 seats (6.8 per cent). When the legal noose started tightening around Lalu over corruption cases, Nitish Kumar switched sides to align with BJP. As chief minister in 2006, he had reached out to the extremely backward classes (EBCs), setting up a separate department, matching their reservation in state bureaucracy with a 20 per cent quota in panchayat institutions. In 2019, this section, around 30 per cent of the electorate, consolidated in NDA’s favour.

For RJD, the 2020 state elections pose a challenge, given the political equations, a section of voters, particularly the youth, moving beyond caste affinity and Lalu away in jail. The results seem like doomsday for caste politics, but political analysts say decoding them is more complicated than it looks. “Lalu was seen as the voice of backward castes. But you cannot play identity politics for long. You have to deliver to retain effectiveness of identity politics,” says DM Diwakar, professor at the AN Sinha Institute of Social Sciences, Patna. The BJP, which was an upper- caste party, roped in leaders like Nityanand Rai, to capture Lalu’s Yadav support base and forged in the foreground Nitish Kumar, who became a popular leader owing to his development agenda. The NDA pursued the politics of reaching out to the backward castes to contain Lalu’s popularity, he says.

According to Verma, Indian politics is in the process of churning. “People are gradually moving away from caste and entering the domain of class. They also feel there’s a Government at the Centre which is delivering.”

Both Mulayam and Lalu, with socialist leaders as their mentors, surfaced in the political arena as part of the Janata Parivar in resistance to the Emergency imposed by Indira Gandhi in the mid-1970s. But they slipped into the quagmire of corruption and caste dynamics, relying on its tenacity to survive in the unrelenting world of politics. From an outreach to backward communities, they further narrowed it down to Yadav and Muslim appeasement. They left it to their heirs to take up the mantle, pursuing the politics of dynasty. Today, the two septuagenarian Yadav leaders watch silently from a distance as their children fight a surging BJP, which promises to change the rules of the political game.