Have You Passed the Nationalism Test?

A democracy can do without fan clubs and vigilante crowds 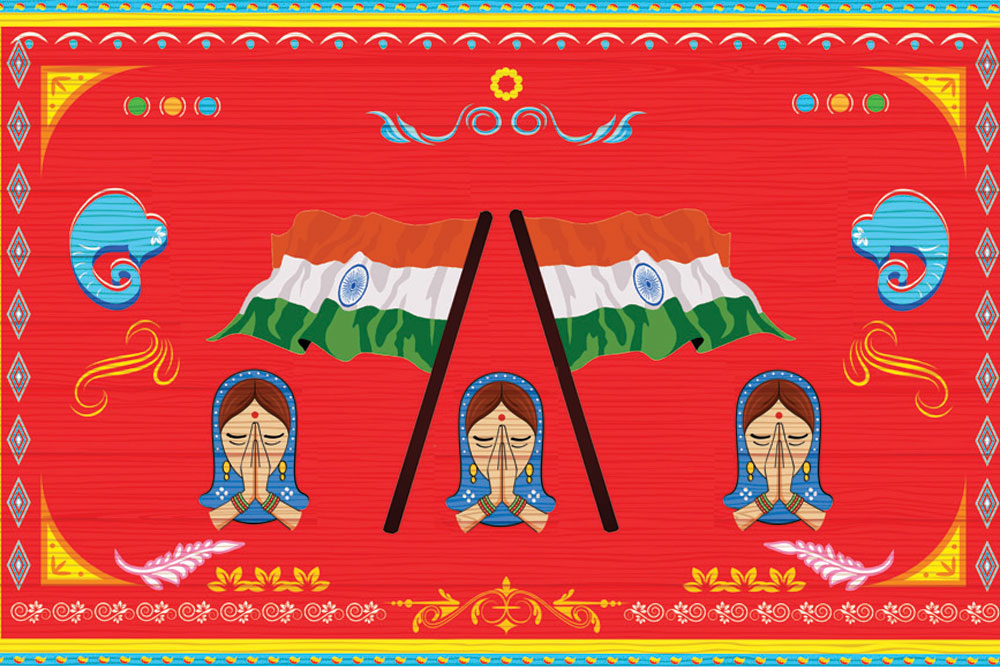 SOMETIMES A SMALL event with an almost harmless beginning becomes a hyperbolic space for discussion. In fact the trigger has little or no connection with the fate of the discussion. An almost mundane comment becomes the source of a major witch-hunt and then one realises that it is not the original text that is important but the contexts of discussion and interpretation. The events around the interventions of the AIMIM MLA from Aurangabad in the Maharashtra Assembly provide one such example.

Imtiaz Jaleel was responding to the governor’s speech referring to plans to construct memorials for Shivaji, Bal Thackeray and Babasaheb Ambedkar. Jaleel’s speech was not a personal reaction to any one of the local icons. All he wondered or asked was, should public money be used for the construction of memorials? Jaleel later pointed out to the ironies of the time where banks hounded farmers who haven’t repaid their loans but could not stop a Vijay Mallya for defaulting on Rs 850 crores. He added that a Mallya would have said, ‘Bharat Mata Ki Jai’ after landing safely at London airport. But what was presented as what economists would call a Guns versus Butter debate became a War Memorials versus Bread debate, between bread as the political economy of everydayness versus sacrament.

Jaleel’s speech was a red flag to the members of the Assembly. They immediately savaged him amidst a chorus of vilification. The BJP MLA Ram Kadam complained that Jaleel had no respect for national heroes. He asked him to recite the slogan Bharat Mata Ki Jai. Jaleel refused, adding that he would not say it at Kadam’s request. He however offered to say Jai Hind. To this refusal, the other members, in a concerted act of Pavlovian nationalism, immediately labelled him traitor and anti-national. The Congress and BJP were happily in tandem. The Congress MLA piously commented that the AIMIM MLAs had no respect for martyrs and added that they should be suspended if they could not chant the national slogan. The BJP MLA Ashish Shelar added that freedom of speech did not include national slogans. He contended Jaleel’s suspension will be a service to the nation.

Revenue Minister Eknath Khadse claimed that anti-national slogans were recited in JNU but were not permissible inside Assembly. The counter-response was that reciting Bharat Mata Ki Jai was not a litmus test of loyalty nor does the Constitution require it. There were different dialects of loyalty and citizenship in the Constitution and it did not say some were more equal than others. It was adequate if the citizen could summon any of them. The Assembly as a chorus suspended the MLA, adding to his sense of isolation.

The reaction of the BJP outside the house was even more disturbing. Dilip Kumar Gandhi, the BJP MP from Ahmednagar, editorialised that the House had a right to suspend Jaleel. “The majority’s feelings should be respected.” To equate majority with democracy literally obviates the need for a Constitution which provides for normative dissent. Gandhi added that “the country has been fair to the Muslims and the government has been trying to bring them into the mainstream.” The question few have the courage to ask is whether mainstreaming is an act of paternalism, a majority’s definition of where a minority should be.

The CPM, in its response, accused the BJP of the usual diversionary tactics, of creating imaginary fault lines between different communities. The Congress, after joining the chorus in the Assembly, condemned it outside as an agenda of polarisation. The BJP General Secretary Kailash Vijayvargiya stole the cherry on the communal cake by claiming expulsion from the Assembly was not enough, one needed to expel such individuals from society.

At one level one, should be able to dismiss some of these tirades as storms in the legislative teacup. However, something about the incident spoils the democratic atmosphere and this we must examine. It raises critical issues about identity, citizenship and loyalty. I want to frame it in terms of two conversations I recently had with Muslim students of mine.

BEING A MUSLIM in India is no longer easy. A student of mine explained, “Try being a Muslim woman in India. You need to be everything except yourself.” She added that it was not truth that matters but political correctness. To be politically correct is to become a yes woman, a stamping pad, a stencil, loyal to an opponent’s stereotype. It is stigma that you have to overcome daily to qualify as a citizen.

Politics for a Muslim as a citizen is not an even playfield. The idea of citizenship does not flatten anything. It makes you more exposed and vulnerable. It is like playing a game with an opponent who also insists on being the referee and the vigilante. Anything a young Muslim says, my student added, “becomes either a security issue or a law and order problem. I cannot enjoy my citizenship or my femininity. Our critics even choose our exemplars. Kalam is the favorite Muslim for the RSS.” A certified ISO/RSS citizen.

Politics for a Muslim as a citizen is not an even playfield. The idea of citizenship does not flatten anything. It makes
you vulnerable. It is like playing a game with an opponent who insists on being the vigilante

Another student, a young Kashmiri, complained that he did not know what to do with memories. “As a Kashmiri child, I felt at home. Then the Army came and I knew I could not be a citizen without an ID card.” Citizenship, he claimed, was now one of identification, not belonging. It becomes an exercise of certificates and clearances. If one protests, the charge of treason is added. “If I complain about violence, I am the problem, not a citizen with the problem, not a citizen with a legitimate complaint.”

The two anecdotes and the event in the legislature forces us to examine the idea of citizenship as a framework of thought and ritual.

CITIZENSHIP WAS AND is a wonderful entitlement. A marker of place, of belonging, of rights. The civics of citizenship as a form of attainment was played against the status of exile, refugee and migrant. Citizenship, or the acknowledgment of citizenship, was a form of homecoming, an arrival. Today the discourse, especially when dealing with minorities, margins and dissenters, creates an unstable idea of citizenship, reducing it to a test, a certification that a surveillance society carries out continuously. It is a topsy-turvy world where one is a suspect and citizen simultaneously.

Partly it is the difference of frameworks, between citizenship as a rite of passage and an instant test of proof and identification. A rite of passage in society creates a different framework of expectation. A rite is a process. It marks a transition, it might have an intermediate period of liminality, of ambiguity, but once the ritual is complete, the individual acquires a new status which is recognised and celebrated.

Loyalty tests become perpetual question marks on who is a citizen and a patriot. Objective and subjective indices create a structure of perpetual suspicion. Dissenters do not feel at home because loyalty and uniformity is confused with homecoming and residence. One was reminded of the British MP Enoch Powell claiming that Indians who are English citizens should cheer for the English team to prove their loyalty to their new country.

There is a second deeper issue, which is about the nature of citizenship and social contract.

The historian Dharampal, a man who loved archives and their possibilities, examined the roots of civil disobedience in the seventeenth and eighteenth century in India. His documents show that Indian society anchored the right of secession as part of rights, or even axiomatic, of citizenship. He gives the example of a village that abandoned a territory. His other documents cite how castes in the city united together to fight rapacious taxes. In such a society, secession and dissent are parts of an active idea of citizenship.

Dharampal adds that the colonial regime sought to create a submissive policy in India and introduced more drastic sedition laws than it had introduced in Ireland and Australia. Sedition was an oppressive colonial tool which our current regimes seem to have internalised. We seem to thoughtlessly impose on dissenters, who are lawful citizens, relationships which are inherently colonial. In Dharampal’s evocative archives, it is dissent that is an act of loyalty and commitment to citizenship, while the loyalty test is a colonial aberration. The RSS and the Congress seek to perpetuate colonialism by other means.

Loyalty tests become perpetual question marks on who is a citizen and a patriot. Objective and subjective indices create a structure of perpetual suspicion

There is thirdly the idea of a diversified polity. Citizenship is constructed as a space for thoughtful civics where dissent and difference are a way of life. Difference is built into politics where patriotism is differentiated from nationalism. Nationalism can be jingoistic, provide for the vigilantism of loyalty tests but citizenship has to allow for difference. In the Assembly, Jaleel was performing an act as a citizen yet he was subjected to loyalty tests. Citizenship has to allow for debate. However, when citizenship reduces participation to the level of a loyal jingoistic spectator, the fan club and the vigilante crowd provide the index of citizenship. Society becomes an excessive search for scapegoats. Belief becomes behaviouristic and instead of citizenship, what we create is a society of mimic rationalists.

In fact, loyalty tests have become knee-jerk. There is something about the Pavlovian test about loyalty rituals where one expects citizens to salivate like dogs when the bell rings. Secondly, one has to understand that memory is not uniform; that different slogans carry varieties of regional memory. To insist on only one formulation destroys the idea of nationalism as a process which may not be complete. To officialise loyalty destroys the dialects of both citizenship and loyalty. When dialects of citizenship are erased, democracy disappears. It is an erasure that we cannot afford.

A society based on differences does not need the instantaneity of loyalty tests. All it might need is the rationality, and the plurality of conversation. After the governor’s speech, when Jaleel raised his fears, legislators could have answered him quietly and reassuringly. Sanity and rationality could have saved the day. Sadly, a simple question got blown out of proportion. A question in a democratic Assembly triggered the possibilities of a witch-hunt. The sadness of democracy begins there.