A day in the life of a Manipuri girl in Delhi 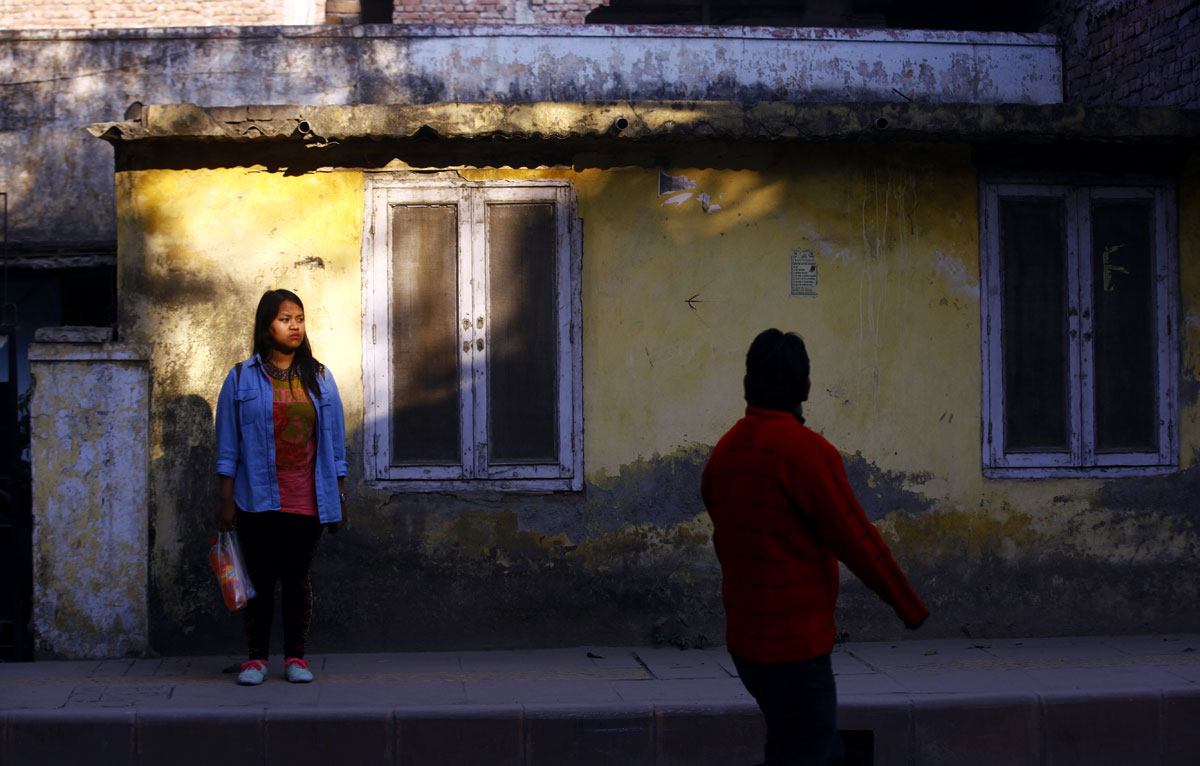 A day in the life of a Manipuri girl in Delhi


On a winter afternoon 19-year-old Deborah Serto was walking down to the arts faculty in Delhi University from her paying guest accommodation less than a kilometer away. Hair covered under a hoodie, face ducked, deep in thought, she looked unremarkable enough to be tailed by a rickshaw driver looking for a passenger. Used to the routine she tried ignoring him but when the man persisted she decided to tell him off. When she turned around to speak to him, removing her hoodie in the process, the rickshaw driver took one look at her and sniggered before disappearing in search of another pursuit, muttering something incoherent but definitely racist under his breath. For a moment she was stunned but continued to walk anyway. Eventually she called a friend to talk about the bizarre experience of being blatantly insulted for no fault of one’s own. The friend advised her to laugh it off and forget about it.

Half an hour later she moved on and is talking animatedly about life in Delhi, attributing the previous seemingly harmless incident to “ignorance and illiteracy” while she tears down a mutton cutlet at Delhi School of Economics. Her father, a Delhi university alumnus, recommended the current choice of canteen while she was getting ready to come to the capital and is excited to be there. Like her parents and siblings before her, she knew that coming to the capital was her only chance at making something out of her life.

“Imphal is a small town. There are little prospects of higher education there. In a way, this was my only choice.” Even before she set foot in the capital there were preconceived notions in her head based on the experiences that were narrated to her back home. “I was told about the racism, but I was also repeatedly told by my cousins to mingle, to not be cliquish and make an effort to diversify as a person.” She doesn’t really have any friends from the mainland yet she admits, but she unfailingly tries. “My classmates who are not from the north east are very curious about our culture and they ask questions which I am always happy to accommodate. We haven’t really hung outside college as such,” she says, attributing the fact to initial awkwardness of knowing someone new that is holding them back. As she ponders over her answers, it is clear that she does not understand the need for such questions, the knowledge of racism and discrimination is not something that she consciously carries with herself and it makes her uncomfortable. She stops eating and plays with her food before announcing that she is leaving to meet her father who is in town for a day.

We take a rickshaw together to the Metro station. This time there are no rude remarks or insolent looks, she talks of the differences between her hometown and Delhi. “Everybody is so laidback there and easy to get along with. There are hardly instances of any aggression,” she smiles, her eyes far away, home for her is an idea, a utopian dream. At the Metro station we meet two of her classmates and she spends the rest of the ride in a conversation about teachers and class politics—lost in harmless preoccupations of adolescent girls she is oblivious to the snide looks of the evening commuters as they make way to their daily cubbyholes. A woman standing in a corner can’t stop looking at the group of girls and feels compelled to whisper something in her friend’s ear and they both laugh at their private joke. Before her stop, Deborah asks a commuter the average cost of her ride to her destination to make sure that she doesn’t get overcharged on the basis of her looks and the language barrier. Even though she can’t speak very fluently, she does in fact understand Hindi very well.

Not many people know that and assume that they’ll get away with anything as long as they say it in Hindi. She gives an example of the time she and a friend gave up their seats on the Metro for two old women who then went on to talk ill of them in Hindi starting with the sentence, “Yeh Nepali,” she laughs through the narration. She is adamant to not let it bother her. Out on the street it is a battle all over again as she stands patiently waiting for an auto while all of them try to rip her off. After fifteen minutes of trying she is eventually able to negotiate a fair price. She has a lot to do and makes way to her father.

Next day we meet Deborah after her classes at Kamla Nagar. Her father just left for home and she has been shopping her allowance through. She is surrounded by two other girls from Manipur who are also her classmates, they’re on their way to eat rolls at a neighborhood joint that they regularly patronize. Deborah tells me the girls are “not like other Manipuri’s,” then goes on to explain how they too are from small towns, are from the tribe and Christians. Meaning they share a similar culture which is lost to most of Manipur that they view as “orthodox and conservative.” The girls are hesitant to see a stranger in their midst and smile politely, talking fast and thick in their native tongue, Deborah politely reminds them to speak in English, but they keep slipping in and out of it. She tells me not to get offended and explains it’s subconscious. As they wait for tables to clear up, the hot topics are Bollywood gossip and the impending college fests that include the much coveted rock night. It is clearly the high point of their year. The boys sitting inside strain their necks impolitely trying to catch the eye of any one of the girls as they chat. They ignore them. A couple more linger on idle motorbikes, staring them down as they ogle at them blatantly. The girls seem to have mastered the art of indifference and chat excitedly about the rice cakes Deborah’s mother just sent from home. The talk eventually moves to violence against the northeastern community and there is a lull. All of a sudden the air hangs heavy as everyone measures their words. After much thought, finally, there is an outburst, “sometimes we feel alienated.” they say. Deborah elaborates, “When in college everything is the same, but it is on the streets that the real discrimination starts,” she says giving the example of the recent Nido case. All of them have been to the ongoing protests against racism but don’t identify themselves as activists, “we went because what happened was wrong,” says Deborah, adding, “Most of the times it’s okay to underplay discrimination but there comes a point where you have to stand up.” The conversation comes to an abrupt halt as she runs into an old friend from home who is accompanied by another girl from the north east. After lunch the girls break up.

Deborah decides to linger on in the university to meet a friend from Hindu college. She feels that she is lucky to study in a college that has a bit of a mixed crowd. Clearly, not all of her friends are this lucky. Walking down the street she opens up about the school friend she just met and says that she only has one friend in college because she can’t negotiate her way through the minefield that are social cliques in Delhi. “Even though the elite are more open, they just want to hang out with themselves. The rest of them want to pass judgments and make fun of our pronunciations and how we look. It becomes hard to break into these groups because they only want to include people when they want something,” she says.

We are back in Delhi School of Economics again. Deborah is sprawled on the grass in a corner with a friend from the north east and is defending her own cliquishness with friends, “most of the mainlanders that I know don’t live here. There is not much time to interact with them besides there have to be some similarities for us to be friends.”

Sometimes you just don’t want to give a back story before each narrative she rationalizes, “it’s easier to relate to people with similar backgrounds. It doesn’t mean I am not open to being friends with them. It’s really hard to mix so in a way I don’t really have a choice. But you do want to be open and helpful to everyone.” Her phone rings and she sighs when she looks at the screen, it is an activist asking her to participate in a fresh protest on violence against north easterners. She is non committal about it because she doesn’t want to identify herself as an activist. “I am not obsessed with the discrimination but I go to these protests to stand up for my rights.” She then explains how she underplays all the subliminal aggression and says it has made her non combative by nature and has shaped her personality in a way. “I make a conscious effort to blend in. I see how most of my Arunachali friends are targeted because of how different they dress and act. I don’t want to be targeted because it would just mean me getting hurt and I don’t want that experience for myself. At the same time, I also want to be in an environment where I am free to be myself,” she picks up her bag and gets ready to leave. She is going to a friend’s place nearby where they will all meet to eat and prepare Singju—a salad that is common in her home town. “Even when we cook, people have preconceived notions of what we are eating. Like we’re all some sort of dog eaters, their ignorance would have been funny if it wasn’t this appalling.” she shrugs. Does she see herself living in Delhi in the next 10 years? The answer is a definitive No. “I feel like a guest here sometimes, like a tourist. I don’t think I’ll ever feel comfortable enough to make it my home.”